New Delhi: To help keep the oceans in India clean, the Indian Coast Guard (A & N) will be undertaking beach clean-up drives at Andaman & Nicobar islands on a weekly basis wherein not only efforts would be put in to make the beaches clean but the events would also be utilised to sensitise locals/ tourists of the importance of Swachh Bharat Abhiyan. This comes in at time when a World Economic Forum study, has estimated that by 2050, world oceans may have more plastic than fish if no urgent steps are taken towards curbing the plastic pollution.

With 56 lakh tonnes of plastic waste generation per year, India’s contribution to the world oceans is a staggering 60 per cent. As India is prepping towards bringing policy changes in reducing the plastic menace, citizens across the country have taken upon themselves the arduous task of conducting clean up drives at several lakes and beaches.

He further added, Officers have been divided into teams and every week one group will be given the responsibility of cleaning the beaches. 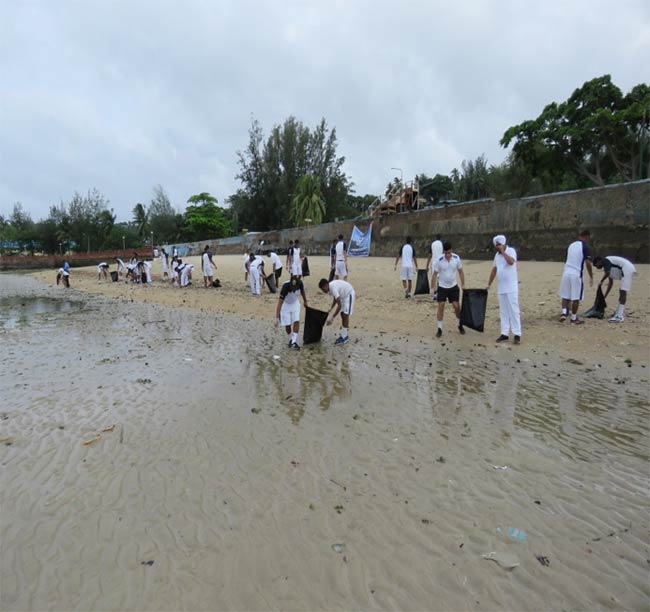 On June 25, officers had conducted a clean-up drive at Marina Park beach from 3.30 pm onwards. Within two hours, officers from the Indian Coast Guard Ship Vishwast group were successful in clearing approximately 200 metres of the beach. Nearly 400 kilos of garbage was removed by the officers, which was later handed over to the Port Blair Municipal Council (PBMC) for disposal.

The time was selected during low tide so as to have maximum area of beach available for cleaning. “The clean-up drives should ideally be conducted during the low tides as the garbage is easily accumulated in the corners, where the flow of the water is less,” said Commandant Singh.

Besides cleaning the beach, officers also generated awareness among the tourists and locals that were present to witness the clean-up drive, “Being a tourist place, it is vital that it kept clean and maintained well,” said Commandant Singh. During the drive banners and placards were also displayed to sensitize the visitors to not to pollute the pristine beaches of the islands.

The event was witnessed and applauded by locals and tourists alike wherein the drive culminated at 1730 hrs, concluded Commandant Singh.