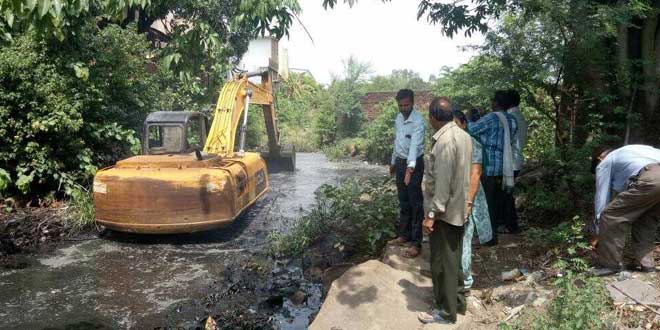 New Delhi: For many, while rains may be a source of relief after hot summers, for civic bodies across the country it is a growing cause of concern. With the onset of monsoons in India, problems like traffic snarls, water clogging and choked drains have become a regular occurrence. Well versed with the amount of or disruption rains can cause, the Bhopal Municipal Corporation (BMC) in June formed the ‘Nullah Gangs’ with an aim to clear the garbage from drains and prevent water clogging.

A detailed examination was conducted by the experts and civic authorities on all the nullahs of the city. Based on the examination report and complaints received from citizens, drain spots were divided into three categories – one that needed immediate attention, one with highest number of complaints and ones that overflow in no time, says Bhagwan Das Bhumarkar, Consultant, Swachh Bharat Mission.

The cleanliness drive began in mid-June and within a period of 30 days, 789 drains in 19 zones consisting of 85 wards were cleaned by the BMC workers.  Nearly 800 TPD (tonnes per day) of garbage was removed with 19 earth digger machines. Safety equipments like gloves, masks and axes were given to all the members of the gang.

Encroachment by slum dwellers has been one of the major causes for choking of drains. “Without giving much thought, the slum dwellers often discard their household garbage into the drains. Since majority of this garbage is wet waste, it takes no time for nullahs to become breeding ground for mosquitos especially during monsoons,” says Mr Bhumarkar.

While cleaning the nullahs, huge amount of plastic wastes including polythene and plastic bottles were removed, “Assuming that these drains are already dirty, any person walking on the road is likely to treat them as dumping spots or bins,” adds Mr Bhumarkar. To ensure that people do not treat drains as bins, the BMC has imposed a fine of Rs 5,000 if anyone is found discarding any kind of waste in city’s drains.

Phase I of nullah cleanup, started last month and has come to an end. A new inspection will soon be carried out and based on the inspection results, Phase II will be initiated. The BMC is hopeful that in the second round, only selective nullahs will required cleaning.

Ganga Cleanup In Kanpur: 77 Polluting Units Asked To Close Down