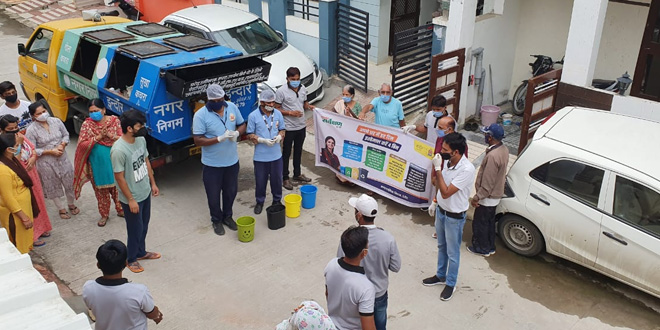 New Delhi: Indore, the largest city in the state of Madhya Pradesh is preparing to do its best to be ranked as the cleanest city in the country in the upcoming “Swachh Survekshan” (cleanliness survey) being carried out by the Ministry of Housing and Urban Affairs, the assessment for which will begin from March 1 and continue till March 31. The city has managed to win the top rank every year since 2017. After making the whole city Open Defecation Free (ODF) and landfill-free, Indore Municipal Corporation (IMC) has been making the city cleaner by focusing on waste management at source. The city has now moved to six-bin segregation of waste at source or the household/commercial place level which include separate bins for dry waste, wet waste, plastic waste, e-waste, domestic sanitary waste, and domestic hazardous waste. The aim is to make recycling, reusing and disposing off the waste faster and in a more organised way. With only two days to go for the Swachh Survekshan 2021 assessment to begin, here is a lowdown on how Indore has been gearing up to win top ranking for the fifth time. 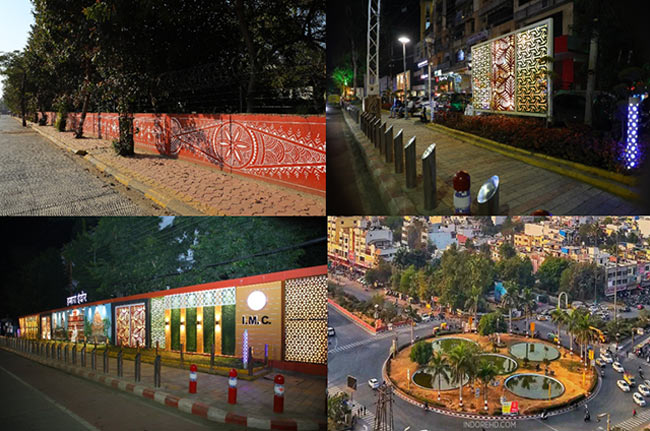 The city of Indore is all set to win the Swachh Survekshan 2021 award: Indore Municipal Corporation

Also Read: Swachh Survekshan 2021: A Look At How Cities Will Be Assessed This Year

The IMC has been embellishing the city by installing colourful lights on the roads and decorating walls with paintings. Talking about how the city is preparing for the swachh awards, Pratibha Pal, Indore Municipal Corporation Commissioner said,

I am sure the citizens of Indore will do their best to preserve the legacy of the previous cleanliness awards. The visual impact of cleanliness comes from maintenance and beautification and these are also the parameters of Swachh Survekshan.

According to Asad Warsi, Centre’s Swachh Bharat Abhiyan’s adviser for Indore Municipal Corporation, it is the trust and cooperation from the people of the city that Indore has been able to keep itself on the top. He said,

The journey from the first Swachh Survekshan in 2016 till now has not been too easy. We faced a lot of challenges in the initial days. But the people of Indore exhibited immense faith in their municipal body and proved that with mutual cooperation and understanding, everything is possible. There have been instances when people have spent money on their own to support IMC in making the city better. A place where people are so enthusiastic and supportive, how can it not win and continue to win as the best city in the country?

Dedicated Separate Vehicles For Collecting Waste From People In Quarantine

Indore is generating around 5-6 tonnes per day of COVID waste, said Mr. Warsi. He added that COVID waste is collected separately in order to keep it separate from the rest of the waste collected. For this, all the households have been asked to put their masks, gloves, medicine wrappers, face wipes, tissue paper in the yellow bin. In order to ensure that the waste collected from households and whole chain of recycling and processing does not get contaminated, separate vehicles are dedicated to collecting waste from households that have people receiving COVID-19 treatment at home or are in quarantine or isolation at home. An App helps IMC keep a track of such households in quarantine to collect their waste in isolation from others.

While explaining about the city’s solid waste management system, Mr. Warsi said that it is based on 4R- Reduce, Recycle, Reuse and Recover in order to build a sustainable and environmentally friendly model of waste management. He said,

The ultimate aim is to make the whole city ‘Bin Free, Dust Free and Litter Free’. Indore fully complies with Solid Waste Management Rules, 2016 and has been implementing compulsory segregation of waste at the source in six parts. It is the only city in the whole country that is following the 6-bin system.

The waste collected by the municipal corporation is transported in covered vehicles and all the people employed by IMC for waste collection and handling, have been provided with personal protective equipment (PPEs), he said. The collection, transportation and processing of the 100 per cent of the waste is done on the same day, Mr. Warsi added.

He said that the city has also gone a step ahead and set up stalls at Palasia intersection where car dustbins, eco-friendly straws, cloth bags, containers for making compost are given on rent, to ensure that citizens do not throw the trash from moving cars and also learn the importance of managing their own waste.

The city has undertaken an initiative to convert waste into energy with an aim to deal with wet waste and at the time reduce the city’s dependence on fossil fuel which causes more air pollution. The Waste-to-Energy plant installed by IMC converts wet waste into 95 per cent pure biogas called Methane which is further converted into CNG (Compressed Natural Gas).

Along with this, the city is also managing its organic waste through a waste-to-compost plant which was installed in 2009 and has a capacity of processing about 600 tonnes of wet waste per day.

Other ways in which the city is managing its wet waste include garden waste management under which about 59 tonnes of bulk garden and horticultural waste is being processed every day. IMC also uses Mobile Composting Units for making compost through waste. These mobile vans can process up to 250 kgs of waste per hour and are being used to cater to wet waste generated from residential apartments or such events that are expected to generate a large amount of wet waste.
The city administration has also been encouraging people to practice home composting. Currently, about 50,000 households in the city are composting their kitchen waste at home.

Indore has been taking up many initiatives to reduce the use of single-use plastics. Under one of such initiatives, all the households that come under IMC area have been given two large bags for them to store plastic waste separately. When one bag is filled, people send a message to the agency appointed for recycling the plastic waste in the city. The agency sends its personnel to the household to buy the plastic from them at a minimum price of Rs. 1.5 per kilogram up to Rs. 5 per kg depending upon the quality of the plastic. Thus, not only is IMC saving on transportation and handling of plastic waste by this process, but it is also helping people gain out of their scrapped plastic products. 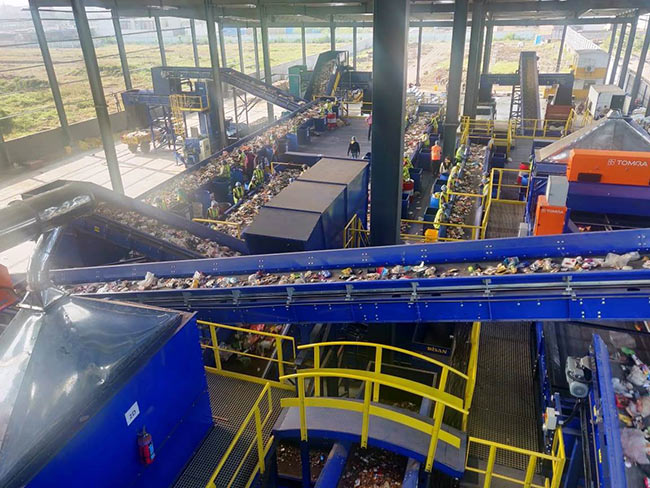 Plastic recycling units buy plastic waste from households at Rs. 1.5- Rs.5 per kg depending on the quality of plastic

Apart from this, the municipal body has been running ‘Bartan Banks’ in the city since 2019 which provide steel utensils like plates, bowls, glasses, spoons and other items free of cost to the people in order to discourage the use of single-use disposables. It has also been running ‘Jhola Banks’ in lieu of the ban on single-use plastic bags. Jhola Bank provides citizens with bags made by women Self-Help Groups from old clothes donated by residents.

By establishing ‘Bartan Banks’ at various places in the city, IMC aims to encourage people to give up single-use plastic items

Cleaning Of Drains And Water Bodies

According to Mr. Warsi, IMC has applied for Water Plus (Water+) certification as the corporation has been able to treat its wastewater completely and thus, no sewage sludge for industrial wastewater goes into the lakes and rivers without being treated first. 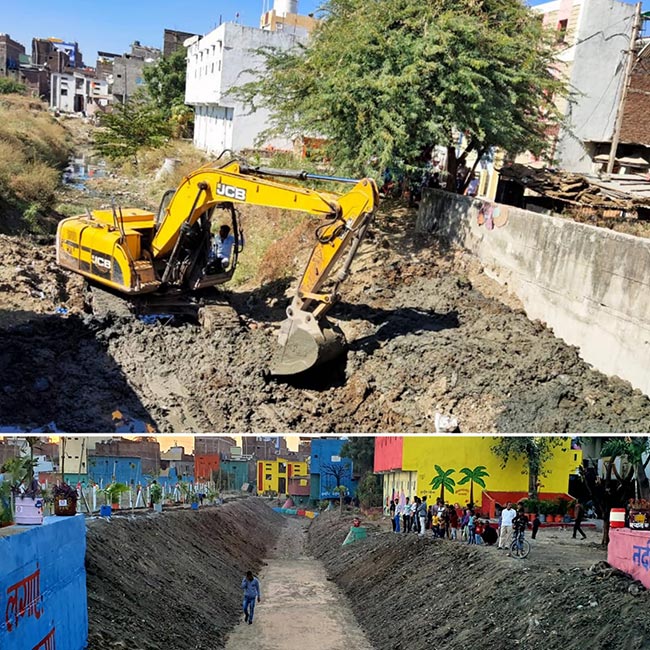 An official at the Department of Urban Development and Housing, Madhya Pradesh informed that Indore has laid an underground closed sewer line in the whole city and has 100 per cent treatment capacity for the sewage generated in the city. Currently, the city generates around 300 Million Litres per Day of wastewater. There are no more open drains in the city and the treated wastewater is being used for various purposes like cleaning of roads, gardening and agriculture purposes. 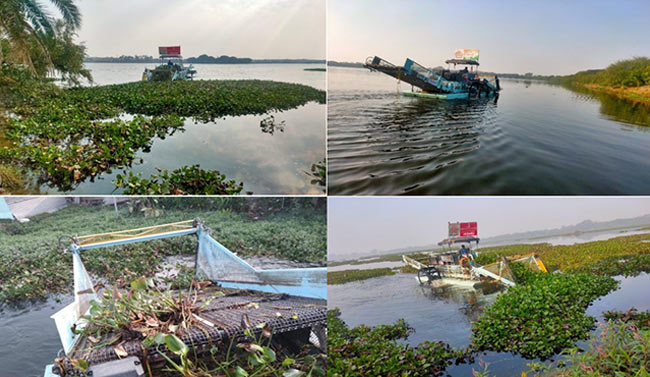 Indore Municipal Corporation has been cleaning its water bodies on priority

The city has made efforts to clean its water bodies as well. According to IMC, there are 147 water bodies in the cities including nine river stretches, nine ponds and 129 wells and all of these have been cleaned and made free from floating and suspended waste. The municipal corporation has also been running awareness campaigns around water bodies to educate people to keep those clean.

Even though the city has already achieved and retained its ODF status, it has not stopped focusing on providing access to clean toilets to its people. It has installed a smart sensor system in 100 of its public toilet complexes and urinals that send a text message to concerned municipal officers and cleaning staff members when the level of the stink of ammonia rises. The officials ensure immediate cleaning of those toilets. Mr. Warsi said,

All of our public toilet complexes are of a high standard in terms of cleanliness and amenities. Each toilet has a sanitary napkin vending machine installed. There are soap dispensers and paper towel dispensers in each toilet.

The city has over 100 Pink toilets dedicated to women. Each of these toilets has a shop inside which provide sanitary pads, baby diapers and other sanitary products. There are feeding spots and diaper changing stations in each of Pink Toilet. Currently, four toilet complexes are operating for people from transgender communities in the city. These toilets are located in the areas where the majority of transgender people reside.