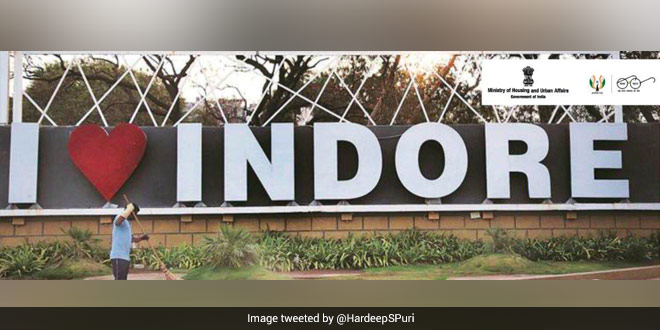 New Delhi: The Swachh Survekshan 2020 announced the financial capital of Madhya Pradesh (MP), Indore as the cleanest city in India. The Union Minister for Housing & Urban Affairs (MoHUA) Hardeep Singh Puri awarded the number 1 title to Indore for the fourth consecutive year, for the category ‘population of more than 1 lakh’. In the same category, Gujarat’s Surat has become the number 2 cleanest city of India, followed by Maharashtra’s Navi Mumbai. In a virtual event titled “Swachh Mahotsav”, organised by MoHUA, Madhya Pradesh was also awarded as the third cleanest state of India, with more than 100 urban local bodies.

Out of the 4,242 cities that participated from all over the country, 378 cities of MP performed well in the survey. Of these 378 cities, 234 were included in the category of ODF (open defecation free) Plus, 107 cities succeed in ODF double plus trial and 18 fared well in the star rating system of the garbage-free city. MP Chief Minister Shivaraj Singh Chouhan tweeted,

Our 20 cities of Madhya Pradesh have been ranked in the top 100 in the cleanliness survey. Many other cities including Khargone, Ujjain, Burhanpur, Singrauli, Chhindwara, Khandwa, Pithampur, Katni, Dewas have also received the award. I heartily congratulate and thank the people of Madhya Pradesh.

Apart from Indore’s consistent efforts and achievements, here’s a look at Madhya Pradesh’s overall performance in the Swachh Survekshan 2020.

MP’s capital city, Bhopal received the title of the Sustainable Capital of India, and stood at number 7 in the cleanest city list. A spokesperson from Bhopal Municipal Corporation (BMC) told NDTV that the award is with respect to the steps implemented by the former Municipal Corporation Commissioner B Vijay Dutta, to improve the cleanliness standards of the city.

According to BMC official, besides sanitation, hygiene, ban on single-use plastic and recycling, the focus this year was also on biomedical waste management.

The official said that all the cities are required to follow ‘Bio-medical waste management for the cities Guidelines for Handling, Treatment and Disposal of Waste Generated during Treatment/Diagnosis/ Quarantine of COVID-19 Patients’, which are a set of protocols from Central Pollution Control Board (CPCB). He said,

COVID waste management or biomedical waste was also the focus in the Swachh Survekshan 2020. Cities are required to follow the CPCB’s protocols for bio-medical waste management. Using the concept of waste to wealth, we are using the wet waste to manufacture compost and energy while the dry waste is being used to make bricks. The use of plastics in the city has noticeably declined in the last year.

CM Chouhan, at a press address, congratulated the citizens of Bhopal, He said,

Bhopal is the cleanest capital of the country. Bhopal has also improved its ranking, so I congratulate the people of Bhopal, mayor Alok Sharma and all the public representatives and the entire team of the Municipal Corporation.

Bhopal had also secured the second and fifth positions in the quarter 1 and 2 of the Swachh Survekshan league, respectively.

The third city to gain significant recognition for their efforts in MP is Ujjain. Ujjain was the best performing city in the ‘Cities with Best Citizen Led Initiative’, and also ranked 12th in the small cities list of cleanest cities.

An official from Ujjain Municipal Corporation told NDTV that citizens’ initiatives like Zero Waste Colony and Pottery banks were the reason behind this achievement. He explained,

We have several societies where citizen groups are self-segregating their waste and selling the dry waste whereas making compost from wet waste. No government officials are involved in this, the citizens are doing this on their own. Through the Resident Association, many citizens also started pottery banks, where they can rent utensils for public functions. Through this, the use of plastic disposable was reduced in public functions. Citizens are also making ropes with old clothes here. All these efforts were recognised by the Swachh Survekshan teams and we got the title of City with Best Citizen-led initiatives.

This year, other cities of MP also saw improvement in their rankings as Gwalior jumped from 46th rank to rank 13, in the list of clean cities with a population of 10 lakh. Jabalpur stood at 17th rank and has also received the award in Citizen Feedback.

Among small cities, Khargone secures the fifth rank, Burhanpur is 14th, Singrauli is 15th and Chhindwara is ranked 16th.

Also Read: Swachh Survekshan 2020, Here Is How Cities Were Assessed This Year

Municipal Council Sihora of Jabalpur district has also received the award for ground water recharging under Citizen Led Innovation category in cities with a population less than one lakh under the Cleanliness Survey 2020.

When it comes to the COVID-19 pandemic and maintaining cleanliness in such times, Asad Warsi, advisor to Indore Municipal Corporation, told NDTV,

We have ensured that all our 8,500 sanitary workers have the gear they need to remain safe and manage the city’s waste effectively. These personal protective equipment are gloves, bodysuit, masks, and we have trained each and every worker on how they have to manage waste with utmost care in these times. No sanitary worker comes in contact with the household owners when they go for waste collection, people of the city are advised to keep waste bins outside their house. We have also trained the sanitary workers on how they need to take care of their personal hygiene which includes washing hands and clothes. Along with this, one round of COVID testing for all the workers has been done to check the spread of the virus and now we follow testing only for those who show or exhibit symptoms of COVID.

Swachh Survekshan 2020: After Getting Awarded As The Cleanest Cities Of India, Indore, Surat And Navi Mumbai Authorities Thank Their Citizens