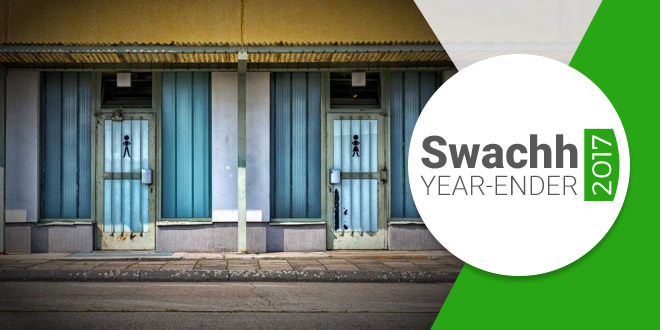 New Delhi: Sanitation coverage in the country became almost double in 2017 since the launch of Prime Minister Narendra Modi‘s signature Swachh Bharat mission three years ago even though behaviour change remains the primary focus and fundamental tool for an open defecation free nation. The Ministry of Drinking Water and Sanitation went all out with its focused Information, Education and Communication (IEC) programme and also promoted gender sensitive information, behaviour change guidelines and various mass education activities to educate people regarding the use of toilets and to promote hygiene and cleanliness.

According to the ministry, IEC activities like door-to-door IPC (interpersonal communication), Swachhta raths, rallies, marathons, felicitation of champions, quiz and painting competitions for awareness generation and mass mobilisation of communities across the rural hinterland are carried out for triggering behaviour change.

The ministry is working with other ministries, state governments, local institutions, NGOs, faith organisations, media and other stakeholders to reach the goal of an open defecation free nation by 2019.

All Union ministries and departments started to work for its realisation with appropriate budget provisions. A separate budget head was created for this by the Ministry of Finance.

During the financial year 2017-18, 77 ministries and departments have committed funds worth ₹12,468.62 crore for their Swachhta Action Plan (SAP). SAP implementation started on April 1.

Under the mission, the government also identified 100 model Swachh tourist destinations under a special clean-up initiative focused on developing iconic heritage, spiritual and cultural places in the country in collaboration with corporates and PSUs.

Also Read: No Haircut Or Tea For Those Who Do Not Use Toilets In This Open Defecation Free Rajasthan Village

But, despite these efforts, there are gaps.

A report by environment body TERI pointed out that “although some cities are aiming at the ODF-plus status with adequate solid waste management, sewerage lines, and storm water drains, many continue to lag behind in incorporating the holistic approach that encompasses managing faecal sludge and septage in planning for sustainable sanitation”.

The report also emphasised that the “government needs to focus on improving the regulatory mechanism by devolving powers to urban local bodies and introduce stringent regulatory measures in scientific management of solid waste and septage for strict enforcement of the ‘polluter-pays’ principle”.

As an innovative initiative, the government also released an app which has a Google toilet locator service. The app provides directions and distance to the nearest public toilet.

Also Read: In Jammu’s Dansal, A Swachh Turnaround Sees Increase In Sanitation Coverage By 54 Per Cent In Just A Year

If The Authorities Would Have Kept Their Eyes Open, Delhi Would Not Have Become A Polluting City, Says High Court