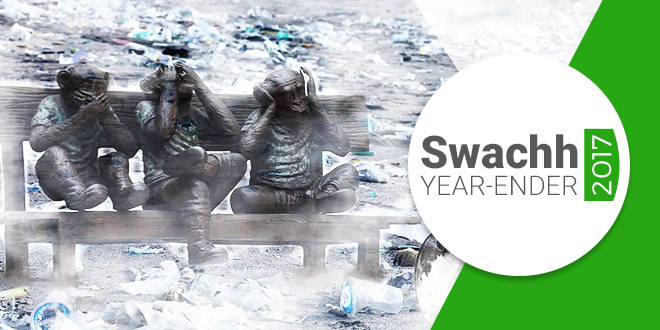 New Delhi: In a recently concluded third United Nations (UN) Environment Assembly, held in Nairobi, Kenya, 193 nations including India pledged to work towards a sustainable lifestyle and a planet free of plastic and pollution. The countries asked the UN to make it easier to reduce, reuse, recycle and prevent waste generation. It is a crisis that needs to be handled on war footing.

When Cyclone Ochki with tidal waves of up to 4.35 metres in height hit Mumbai’s beaches on December 5 and 6, Mumbai woke up to heaps of garbage deposits on its beaches. Around 80,000 to 1,00,000 thousand kilograms of garbage out of which most of the waste was plastic washed ashore. Cyclone Ochki witnessed people from all walks of life coming out of their house and helping Brihanmumbai Municipal Corporation (BMC) in cleaning the beach.

Even the floods in Mumbai during one of the heaviest rains since 2005, was also compounded by plastic clogging drains and even when the water receded, it was the plastic in the muck that remained that made cleaning up difficult for citizens and local authorities alike.

From Mumbai to Delhi the issues may be different, but the cause remains the same – the omnipresence of plastic that stubbornly remains in the system for years and causes irrepairable damage.

Ghazipur landfill in east Delhi, which is Asia’s oldest functional landfill collapsed this year under its own weight of 80 feet high mountain of garbage that has been piling up since 1984, and even after its life span was over in 2002. According to a report by non-profit organisation, Centre for Science and Environment, out of close to 4.74 million tonnes of garbage lying at Ghazipur landfill site, about thousands of tonnes is plastic.

From rivers to oceans to landfills, every nook and cranny has become a dumping ground. While aftermath of Cyclone Ochki showed a grim reality of Indian oceans and how they are loaded with plastic we litter, Ghazipur landfill gives a glimpse of the amount of waste we generate, especially plastic waste.

2017 saw many actions, not just ftom the government, international community but also individuals.

From being one of the biggest littering items to choking water bodies to threatening marine life, plastic waste is one of the biggest menaces and needs serious attention in the coming year. 2017 witnessed some great moves by both government and individuals, but 2018 needs a more of it.