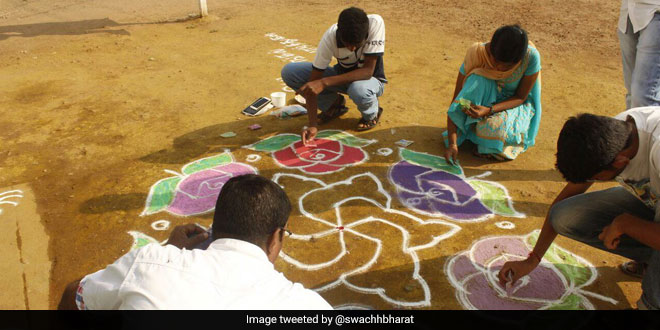 Mumbai: Pongal is one of the first festivals celebrated by the people of Tamil Nadu at the beginning of the year. It is a four-day-long harvest festival celebrated as a thanksgiving ceremony for the year’s harvest. Interestingly, on its first day known as ‘Bhogi’, people clean their houses and discard the unwanted materials. Along with the agriculture waste, the discarded items are tossed into a bonfire traditionally made of cow dung cakes and wood. According to the Madurai Municipal Corporation (MMC) tonnes of wastes is burnt every year leading to a spike in air pollution levels. To tackle this problem, the MMC has come up with a unique ‘The Bhogi Bucket Challenge’, where people can deposit their household waste instead of burning them.

MMC Commissioner Anish Sekhar released a notification asking people to not burn any kind of waste including stubble, plastic and electronic waste. The MMC will place buckets across the city where citizens will deposit their waste in the bucket and in return get a cloth bag. The municipal corporation has collaborated with Kuppaikaaran, city-based NGO that deals with waste to treat the collected waste scientifically.

Talking to NDTV about the significance of Pongal and the need to celebrate it in a way that does not harm the environment, a city health official from MMC says,

Pongal is the prime festival in Tamil Nadu which is celebrated with fervour and holds great religious significance. However, it is also not environment-friendly due to waste burning. It is not possible to stop people from following the century-old customs and traditions and so we have come up with an alternative way of celebrating it. Once people give away their waste, the bucket will be taken by the NGO. This way we will also prevent tonnes of waste from going to the landfill.

The bucket challenge will be carried out from January 11 to 22. Buckets will be kept across 50 designated areas that include bus stands, corporation office, public parks and government schools.

As an incentive to people for their noble act of celebrating a smoke-free Pongal, the civic corporation will give cloth bags to the citizens for free. In fact, last year the MMC had given blue and green bins to people under the bucket challenge. The idea was to encourage people to segregate waste.

Last year we had received an overwhelming response to the bucket challenge and we were able to accomplish two goals (of informing people about waste segregation and celebrating a smoke-free festival). This year, since the latest step taken towards environment is the state-wide plastic ban, we will give cloth bags to people, says the official.

In 2018, the Kuppaikaaran organisation had collected old clothes like shirt, pants, inner wear shocks (including torn cloths), footwear, etc. All the dry wastes were segregated into reusables and given to the needy people. The ones that were recyclables were sent for recycling.

Why Go Zero Waste? Mumbai To Organise A Waste-Free Marathon To Spread Awareness