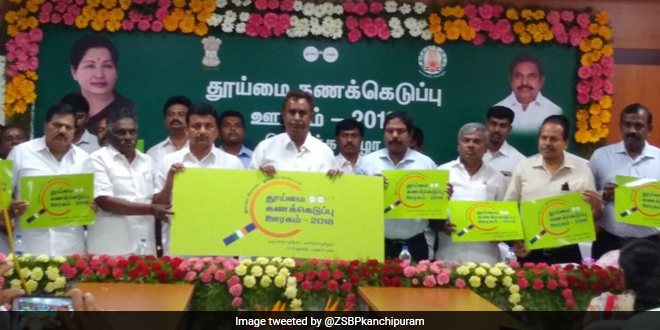 New Delhi: Tamil Nadu is all set to declare its rural areas open defecation free (ODF), and become the third southern state after Kerala and Andhra Pradesh to attain ODF status for its rural areas. At the launch of Swachh Survekshan Grameen 2018, the rural sanitation survey conducted by the Ministry of Drinking Water and Sanitation, Tamil Nadu’s Rural Development Director K. Baskaran said that 30 of the state’s 32 districts have become ODF, with only Cuddalore and Villupuram district yet to gain ODF status.

Tamil Nadu has been consistent with its toilet constructions since the Swachh Bharat Abhiyan began in October 2014. The state had sanitation coverage of 46 per cent in 2014 but has increased it to 99 per cent in four years, with over 21 lakh toilets being constructed in 2017-18. More than 49 lakh toilets have been built in the state in the last four years and over 12,500 village panchayats have been declared ODF.

Tamil Nadu has improved its rural sanitation coverage by more than 50 per cent in four years. Today, the rural areas of the state are on the brink of becoming open defecation free. All the district magistrates in the state were asked to regularly monitor the progress made on the sanitation front from day one. Several NGOs, self-help groups and local people have contributed immensely to the rural sanitation success of Tamil Nadu, said Mr Baskaran.

The state is confident of attaining the ODF status by early August and performing well in Swachh Survekshan Grameen. A total of Rs 600 crore has been spent by the Rural Development Department since 2014 to improve waste management facilities in rural areas. The steps taken to improve waste management mechanisms include improvement of waste collection in villages, encouraging segregation among villages and encouraging them to use compost generated within the village for agriculture. The government appointed more than 66,000 people to monitor (locally known as Thooimai Kavalar – green monitors) the implementation of waste management schemes. In the last four years, the state government has distributed 93,000 bins across all villages in the state.

“From the beginning, our priority has been both improving sanitation and waste management in rural areas. Over 200 villages segregate waste regularly and we are hopeful that the number will only keep increasing with the presence of Thooimai Kavalars. Our focus on waste management has been extensive and I am confident that it will lead to good rankings in Swachh Survekshan Grameen,” said Mr Baskaran.

Swachh Survekshan Grameen, which has already been flagged off in multiple states, is scheduled to begin from August 1 and continue till the end of the month. Tamil Nadu seems well prepared for the survey and has already handed over a handbook to the panchayats to help them participate. The handbook contains detailed information on the parameters of citizens’ feedback, service level progress and direct observation. The state now hopes to make a new mark in the country’s Swachh map with ODF status for Tamil Nadu’s rural areas, coinciding with good rankings in Swachh Survekshan 2018.