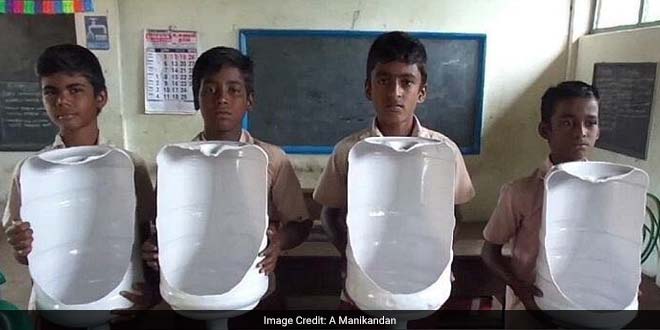 At the Panchayat Union Middle School in Tamil Nadu’s Kurumbapatti village in Karur district, it was not the lack of toilet that was the problem. It was having one that was. The presence of the toilet was very apparent, due to the overbearing stench it emanated that breached the walls of the toilets to engulf the classrooms too. It was relentless, constant and after a point in time unbearable for its occupants. Little children who would otherwise come tidily dressed to school everyday, would struggle to sit through the day in this stink. Some would fall sick due to nausea and other ailments. Soon to avoid the stink, the children started avoiding the school itself.

But avoiding the problem doesn’t make it go away. Finding solutions do. And sometimes all that is needed is an opportunity, which came in the form of a school level competition – Design for Change (DFC). Design for Change is a global competition held among school students across the world and rewards school students who have contributed in bringing change in their surroundings and communities. The nationwide competition was held in December 2016 with a participation of over 30,000 schools. Five 13-year-old students of Panchayat Union – Supikpandian, Santhosh, Dhiyanithi, Ragul, and Prabaharan decided to take up the challenge by making their school toilet stench free. The school toilet, as this team of students realised, hardly qualified as even a basic, functional loo. It was more a room designated as a toilet, where students were just relieving themselves on the floor, due to lack of proper urinals. Add to this the issue of lack of water in the toilets, which meant that there was no way the toilets could be cleaned after use, resulting in stench and infection among children as they were not washing their hands after using the toilet.

After this realisation, came the reality check. The cost of installing urinals and revamping the drainage system was too high for the school to bear. But the ingenious minds of these 13-year-olds had already started to think of an idea that would be low in cost but equally effective in tackling the problem. The students spotted resemblance between urinals and 20 litre water containers made of plastic. Supikpandian pitched the idea that these water containers could be used as urinals, if cut and installed properly. For further advice, they put forward their idea to science teacher D. Kesavan who encouraged them to go ahead. The boys also met a seller of plastic water containers who gave them 20 such containers for free on hearing what they planned to do with these.

The urinals did not have a proper drainage system and that resulted in stench and ailments across the school. The five students came forward with a plan, and what would have taken thousands of rupees, they accomplished for a meagre amount of Rs. 600, said D. Kesavan, science teacher at the school.

The project was named as Safe Mode Pissing System (SMPS) and work began with fervour. The drainage system of the school toilets had to be synced with these modified urinals, created by cutting the water containers vertically. Pipes were stuck to the bottom of the containers and these were linked directly to the drainage pipes in the toilets so that the discharge flowed directly into the drains. The containers were painted white and nailed to the toilet wall. 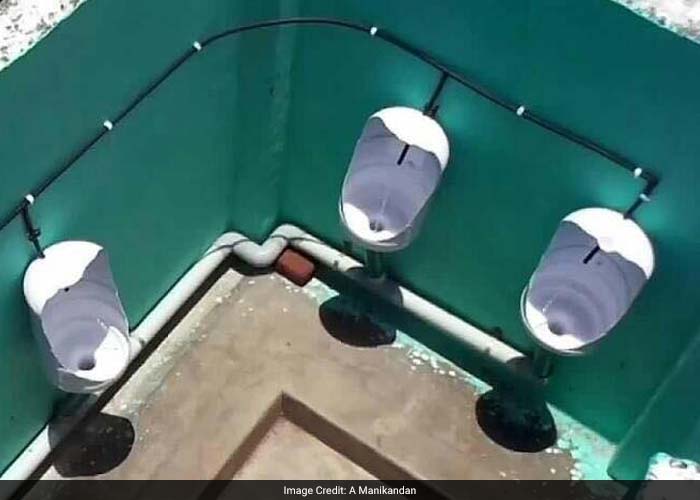 But a creative solution to a basic problem also needs to be maintained or the stench would return, right? So to ensure cleanliness and stench free loos, the students set up drip irrigation pipes above these urinals. A continuous flow of water drops from the pipes ensured that the toilets were continuously cleaned and any possibility of stench washed away. The students also paid attention to detailing. They were careful to install the urinals at varying heights, so that students of differing heights had no problem of access.

The project has been a roaring success at Union Middle School, as students no longer have to bear with the stench of urine or the fear of other hygiene related issues. The attendance has improved rapidly since the installation of the urinals. News of the project’s success spread beyond the walls of the school. The five-member team travelled to nearby schools to talk to teachers on how their innovative solution is the easiest and most cost-effective way to improve sanitary and hygiene standards in schools’ toilets. The team even conducted practical demonstrations in other schools and Community Centres to encourage people to consider setting up these installations.

Project SMPS of Union Middle School was the only government school to be awarded at the Design for Change (DFC), India competition in 2016, where there were 38 other submissions from government schools in Tamil Nadu. It was selected as one of the Stories of Change in the competition and won a cash prize of Rs. 50,000, alongwith medals for the five members of the project group.

Boosted by the victory, the school is now looking to address other issues plaguing the school, such as lack of water supply, and plans to rope in the famous five who can solve problems with inventive ideas.

Our school also suffers from water problems. Students are often unable to wash their hands after using toilets. With the amount that we have won from the competition, we are now looking to explore possibilities of solving water crisis in our school, said Mr. Joslin Mary, Principal, Panchayat Union Middle School.

Assam’s ‘Swachhta Maulana’ Is A Crusader For Swachh Bharat Abhiyan