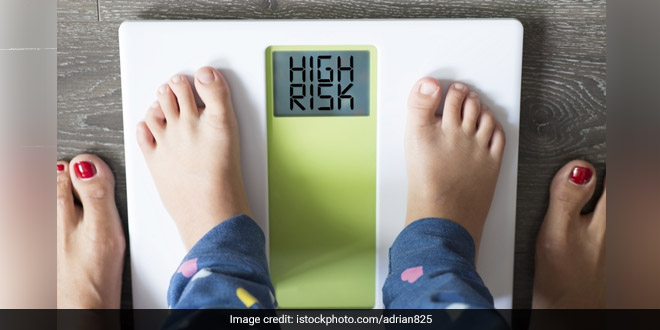 New Delhi: On Saturday, the ministry of health and family welfare released the first set of findings for 22 states and Union territories as a part of its fifth round of the National Family Health Survey (NFHS), conducted in the year 2019-20. The survey that has been conducted after a gap of about three years found a drastic rise in obesity among children under five years of age in 20 of the 22 states, where the study was conducted.

According to the NFHS-5 data, several states and Union Territories, including the bigger states/UTs like Maharashtra, Gujarat, Mizoram, Tripura, Lakshadweep, Jammu and Kashmir, and Ladakh, have shown a several fold increase in the percentage of obesity among children below five years of age in comparison to NFHS-4 conducted between 2015 and 2016.

About 13.4 % under the age of five were found to be obese in Ladakh which was highest among the 22 states and Union Territories surveyed, followed by Lakshadweep at 10.5%, Mizoram 10%, Jammu and Kashmir, and Sikkim 9.6% each.

On the other hand, according to the report, only Goa, Dadra and Nagar Haveli, and Daman and Diu have registered a drop in the number of overweight children under five years of age.

Apart from the children, the NFHS 5 findings highlight that there has been a rise in obesity in adults in comparison to NFHS-4.

According to the report findings, men and women were counted as obese whose body mass index was found to be over or equal to 25.0 kg/m2 while children’s obesity was counted in terms of weight-for-height.

Healthcare experts have attributed the rise in obesity to unhealthy food choices and lack of physical activities among children and even adults.

NDTV speaks with Basanta Kumar Kar, recipient of the Global Nutrition Leadership Award about the obesity and nutrition trends of NFHS 5 report. Attributing the growing trend of obesity in the country to unsafe diet, excess consumption of salt, sugar and fat including trans-fat as the main reason, he said,

Whatever policies we have in terms of nutrition that will need to work at the ground and things have to happen at the bottom line. India needs to become Nutritional Self Reliance (Atmanirbhar Poshan). As per the Comprehensive National Nutrition Survey (CNNS)-2016-18, India already witnessed children with pre-diabetic condition. 10.3 per cent of school-age children and 10.4 per cent of adolescents are having pre-diabetic condition in our country and in the state of Odisha, 19.2 per cent of school-age children and 19 per cent of adolescent are with pre-diabetic condition. It signals an emergent action. India runs the risk of an impending nutrition famine and epidemic of obesity, diabetes and other non-communicable diseases (NCDs) related to poor nutrition. Non-communicable diseases, including heart disease, stroke, cancer, diabetes, and chronic lung disease, are collectively responsible for almost 70 per cent of all deaths worldwide, according to the World Health Organization. The risk of obesity can be passed from one generation to the next, as a result of behavioural and/or biological factors. It is necessary to be cognisant of this double burden of malnutrition and approach the problem holistically for a Sustainable Nutrition Revolution that India needs today.

Mr Kar also added that the NFHS 5 result signals an alarm bell highlighting the greater need for the right investment during first 1,000-days as First Window of Opportunity and prior to that has a profound impact on reducing obesity. Suggesting some of the ways in which India can move forward and fix its nutrition game, Mr Kar said,

The present National Food Security Act -2013 is grossly inadequate. India needs a new national legislation on Food and Nutrition to address all forms of malnutrition and deal with, a) farmer’s security, b) sustainable food and nutrition security, c) food safety including management of food and nutrition value chain, and d) preserving bio safety and bio diversity.

Firstly, we need to work towards making our districts self-sufficient. Almost 90% children at their most critical age of 6-24 months do not receive adequate diet that includes minimum four food groups. The pregnant women need diversified diets from minimum six food groups. In order to increase access of safe and nutritious diets, the local food system must be caring, inclusive and accountable and each district must be self-sufficient in minimum six food groups. These food groups are cereals and millets, pulses, milk and milk products, roots and tubers, green leafy vegetables, other vegetables, fruits, sugar, fat/ oil and meat, fish, and eggs. Investing on women small holder farmer will be a key policy priority. The action research projects at district level to demonstrate impacts like reduction of stunting, wasting, anaemia, obesity and overweight will enhance India’s reservoir of nutrition models.

He also said that we need a 360-degree action plan which facilitates good nutritious food in the market and at household levels. Mr Kar added,

Introduce sugary taxes and stop trans-fats across the states, our supermarket receipts should give us calories count. May be we can use ‘traffic light’ kind of labels on food packaging that can help people eat better and caution them for products that are high in fat or are bad for their overall health. We also need, socially responsible business leaders to come forward to establish Global Centre of excellence(s) that can aggregate knowledge and provide new generation of breakthrough research and evidences. Lastly, to motivate different brands to produce top class products, we can have some kinds of rewards and recognition for outstanding producers complying to quality standards.

Attributing the rise in obesity levels in India to easily available high-fat and high-sugar foods in the market, Sheila Vir, a public health nutrition expert and founder director of Public Health Nutrition and Development Centre, said there is also lack of awareness on what are good food habits. And since the high-fat and high-sugar foods are easily available, there is higher consumption of it. She added,

We have a double burden of undernutrition, malnutrition and overnutrition occurring together. So, I think what to feed a child is what we are going wrong in.

Speaking about obesity and how coronavirus crisis has worsened the statistics, she added,

Obesity is a manifestation of what is rapidly changing in our environment. Of late, we see trends which increase the risk of developing obesity. Environmental factors, such as availability and consumption of junk foods, poor complementary feeding, lack of outdoor activity, and increased screen time. For children, we need to flag screen time as it has multi-dimensional effects, obesity, being one of them. The focus has been on breastfeeding, but now it’s time that complementary feeding is also focused upon.

Talking about the repercussions of obesity among children, he said non-communicable diseases can develop among obese children earlier than others. He added,

There are higher chances for them being bullied in schools, neglected or shamed by peers, which lead to mental health problems as well among them.

The NFHS results of 17 states and five Union Territories have been released now as phase-one. The phase-two results covering other states will be released next year, according to the health ministry. The present NFHS was conducted on 6.1 lakh sample households, involving household-level interviews to collect information on population, health, family planning and nutrition related indicators.

With Its Multi-Sectoral Approach, Namami Gange Has Been Successful In Making Positive Impact: NITI Aayog CEO