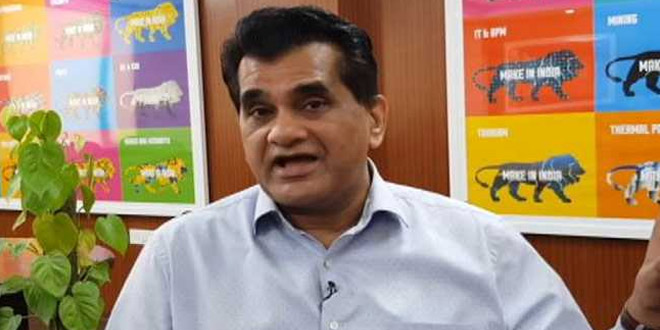 His remarks came on the second day of the 5th India Water Impact Summit 2020 which was organised by the National Mission for Clean Ganga (NMCG) and its think tank, Center for Ganga River Basin Management and Studies (cGanga). This year the event is organized virtually with the theme of Arth Ganga – River Synchronized Development.

Mr. Kant also congratulated the National Mission for Clean Ganga for bringing together national and international experts for the 5th IWIS which focuses on “River Conservation Synchronised Human Settlement”.
Prof. Vinod Tare, founding head of cGanga explained that river conservation and development are two sides of the same coin.

Taking inspiration from the Prime Minister’s “vocal for local” campaign, he suggested that local water bodies should be managed by local people and should cater to local needs. This will generate local employment and reduce the cost of transporting water, he said.

‘Namami Gange Programme’, is an Integrated Conservation Mission, approved as ‘Flagship Programme’ by the Union Government in June 2014 with a budget outlay of Rs 20,000 crores to accomplish the twin objectives of effective abatement of pollution, conservation and rejuvenation of Ganga river.Speaking on the occasion, Rajiv Ranjan Mishra, Director General, National Mission for Clean Ganga (NCMG) said that the mission’s vision is not only working towards making present river-cities sensitive towards rivers but also ensure that these problems are not repeated as India continues to urbanise rapidly.

We are working to integrate ‘Urban River Planning’ and ‘Urban Water Management Plan’ in the city’s master plans and the new master plan for Delhi under preparation would be made river sensitive, he said.

As it was International Mountains Day 2020, he spoke about the importance of mountains in the entire ecosystem including rivers. Most rivers originate from mountains.

According to an official release by the Ministry of Jal Shakti, Kees Bons, Deltares, Netherland presented three major takeaways from their experience.

These include ensuring that any new development or growth is sustainable and does not lead to another problem, following an integrated approach and nature-based solutions and, keep planning technical infrastructural solutions.

Recently, cGanga signed an MOU with British Water to create a bridge for UK industry to pair up with its Indian counterparts to build 21st-century infrastructure in the water and environment sector, the release said.

The UK is also becoming a major partner to help India tap into the global capital base to finance its green growth agenda.

In a session on ‘Financing global water security and journey to COP -26’ Gayatri I. Kumar, High Commissioner of India to the United Kingdom said,

We are continuously engaging and encouraging UK investors to invest in India particularly in the water sector.

There Has Been Drastic Rise In Obesity Among Children Under 5-Years In 20 States, Reveals NFHS 5 Report