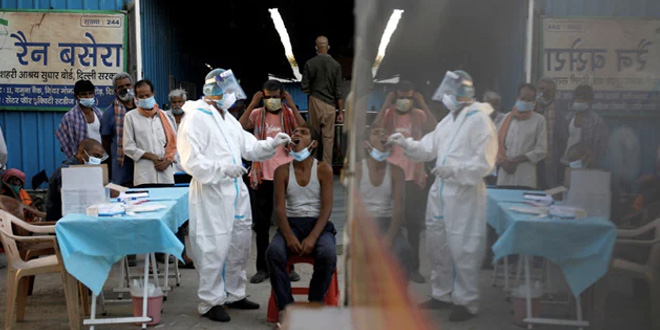 New Delhi: In India, active Covid cases have declined to 4.02 lakh, it constitutes 1.26 per cent of total infections. The recovery rate has been steadily increasing. According to the data by Health Ministry, it is currently at 97.40 per cent. The daily positivity rate is at 2.59 per cent – less than 3 per cent for 14 straight days, according to experts this is a sign of relief. The World Health Organisation (WHO) has declared Covid positivity rate below 5 per cent to be within the safe zone. To get more idea of what’s going in India when it comes to fighting the battle of coronavirus, NDTV speaks exclusively with World Health Organisation’s Chief Scientist Soumya Swaminathan. Explaining the same, she said,

This is something going with other countries as well. In America, for example, we had seen that after the very severe wave and the peak of cases, it actually settled down at a level, which was barely constant – sometimes it was rising, sometimes it was declining. And that is what exactly India is seeing now.

Also Read: Here Is How To Get COVID-19 Vaccination Certificate Within Seconds On WhatsApp

She further said that India still has a large number of people who are susceptible to the infection and therefore the virus will keep on getting an opportunity to spread from person to person. Mrs Swaminathan also said that there is a need to take a stronger view on the transmissibility of the virus and said,

The reason, I say, we need to focus on this is because it won’t be like one fine day it will come to an end and the cases come down to zero. This scenario is very unlikely, so i think, we need to find the right balance. We need to control the infection to a point that doesn’t overwhelm the health system and at the same time, we need to keep deaths down to the minimum, which can be done by protecting those who are at high risk from the disease and by increasing the vaccination drive.

Highlighting her viewpoint on the anticipation of the third wave in India and will it be as severe as the second wave, Mrs Swaminathan added,

It is unlikely that the third wave will be as severe as the second wave. We saw that in the second wave, a huge percentage of people got infected, so because of the previous level of infection and increasing vaccination coverage on side by side, it is very unlikely that we will see the kind of devastation that we saw a few months ago during the second wave. But having said that we should not become complacent as having a wave in a small town or rural area can also be as problematic as last time as those are the areas where we don’t have the kind of health facilities that are needed to cope up with the disaster. So, we need to work on strengthening facilities in those parts.

Talking about Delta variant and the havoc it is creating in other countries that are now seeing record-breaking cases, even though their vaccination percentage is much higher than India, Soumya Swaminathan said,

This is the problem with the variants, and we cannot predict what next variant will emerge or how dangerous that will be. Therefore, we need to keep the transmission as low as possible and prevent variants from forming. Delta is definitely more transmissible; we know one infected person with the delta variant can infect 7 to 8 people and in some cases even 10 persons. Because of this nature, we have seen many explosive waves in different parts of the world, moreover, more people land up in the hospitals as compared to previous versions. We have also seen data from many vaccines now that show a reduction or neutralising activity against the delta variant. Luckily, what vaccines we have in the world also shows that they are effective against preventing the disease and decreasing hospitalisation by up to 90 per cent. But, when it comes to delta variant, the prevention of the disease is less, up to 40 to 50 per cent.

Mrs Swaminathan also stressed that now the world needs to ask questions like “how long will we stay immunised against the disease”; “will there be the need for booster shots & if yes then we have to decide in what stages it will be required”.

In the end, Mrs Swaminathan spoke about COVID-19 vaccination in children – is it a right step in the fight against coronavirus or is it too early. She said,

As far as children are concerned and that has been defined by the data from many countries that the infection in children is mild, even long covid cases are less in children. This also means that they don’t need vaccines on priority. We need to first vaccinate the vulnerable population and then think about the rest. In children as well, we can consider vaccinating those who are at high risk of getting the infection. For now, we have two approved vaccines – Moderna and Pfizer for children above the age of 12 years. Over the next few months, we will have more data on vaccination for children. There is some belief that children need to be vaccinated before they can join school, but that’s not the case, as long as adults around them are fully vaccinated, COVID-19 protocols are being followed, we will be good to go ahead. Education institutions can and should go ahead with the unlock.

Mumbai Starts Door-To-Door Vaccination For The Handicapped, As CM Uddhav Thackeray Warns Of A Lockdown If The Cases Rise