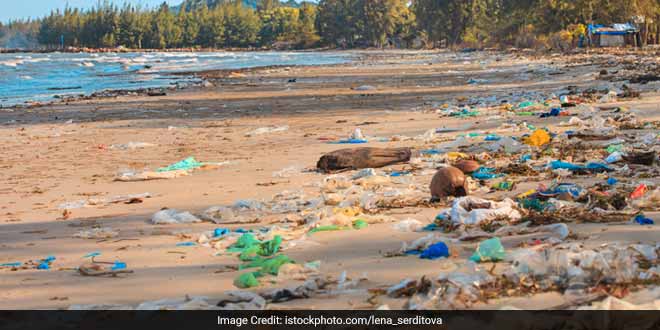 Mumbai: Taking a cue from the ongoing Swachh Bharat Abhiyan, Zsuzsanna a Hungarian woman and her husband have taken a firm resolution towards cleaning the Rangaon beach near Vasai in adjoining Palghar distrct, Maharashtra. Every Sunday, Zsuzsanna Ferrao, trods up to the Rangaon beach and goes about cleaning it. Giving her company in the beach cleanliness drive are her husband and Vasai resident Lisbon, with three-year-old son Lucius and 19-month-old daughter Nascha. This Hungarian family is setting an example in keeping the beach clean.

I consider India as my own country and believe we should make every effort to keep it clean. Hungary doesn’t have beaches but it has many rivers and lakes. I have been living in India for the last four years and feel people should keep the beaches clean. Some days, it is very difficult. The beach is full of rubbish. I wanted to find a clean place on the beach where my children could play, Zsuzsanna says.

Her husband Lisbon Ferrao says he is a firm believer in Prime Minister Narendra Modi-led Swachh Bharat Abhiyan. He married Zsuzsanna in 2013 and they have been living in Vasai ever since. He uses the storage compartment of his two-wheeler to collect bottles dumped on the beach.

Zsuzsanna found that the Rangaon beach is full of discarded footwear, liquor bottles, syringes, and other garbage. My wife is a nature-lover and so visits the beach at least once a week. She has taught our children not to litter and the importance of keeping our environment clean. Lisbon, a businessman, said.

Zsuzsanna remains oblivious to people staring or giggling at her as they pass by watching her pick slippers, whiskey bottles, plastics, medicines bottles on the beach.

It is laudable that a foreigner is so concerned about cleaning of our beaches. I have seen her collecting garbage and taking it in her car, to be dumped in the nearby dustbin. Her husband uses the storage compartment of his two-wheeler to collect bottles dumped on the beach, said Rajesh Gharat, a resident of Rangaon.

Kerala To Form A Common Body To Clean And Protect Rivers