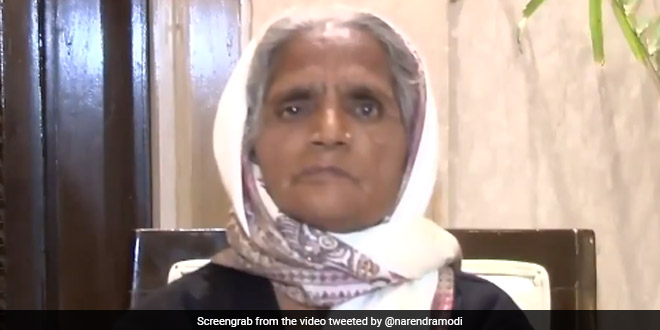 Kanpur: Kalavati Devi, 60, a resident of Kanpur in Uttar Pradesh, is a mason and on a mission – to build toilets across all slums and lower income neighbourhoods in her city. She is the recipient of the Nari Shakti award. A hardworking, mother of two married girls, she has had a long association with Shramik Bharti, a local NGO that works on sanitation issues. Kalavati was not always the confident construction worker that she is today.
Hailing from Sitapur, one of India’s most backward districts, she came to Kanpur around 40 years back, as the 14-year-old bride of an 18-year-old Jairaj Singh.

Also Read: My School, My Farm: This IAS Officer’s Brainchild Has Led To A Poshan Revolution In A Remote Mizoram District

Being a child bride she never had the opportunity to go to school and yet she managed to run her home efficiently and bring up her two children. Times were always hard but she always had Jairaj’s support.

Then, nearly two decades ago, when the family was staying at Raja ka Purwa slum, she underwent a transformation that was triggered by their filthy living condition. She recalls,

For 700 families living in the area there was not even one community toilet, which forced everyone to defecate in the open. Had someone tried to draw a picture of hell that slum would have fitted the description perfectly.

Kalavati wanted to do something for her locality and Shramik Bharti was looking for committed people like her who wanted to bring about change from within. It was Jairaj who took his wife to the NGO to talk about her plans – she had made up her mind to find out how a public toilet could be constructed in Raja ka Purwa. A member of the NGO said,

We were exploring work possibilities in areas that needed urgent attention when Kalavati approached us with her idea of getting a 10-20 seat public facility built in her slum.

It was a feasible project and Shramik Bharti gave her a go ahead. Kalavati elaborates,

There were many challenges that came in the way. Neither did anyone want to donate land to build the facility nor was the community willing to chip monetarily or contribute their labour at the time of construction. There were also several questions raised on the need for a toilet, the procurement of funds and the ‘real’ intentions of the NGO. Basically, people did not really feel that they were living poorly or that they needed to change for the better.

But this was Kalavati’s dream and she was prepared to go that extra mile to fulfil it. She went door-to-door speaking to families and even conducted joint meeting with the community to convince them to back her plan. In the end, her passion and infectious enthusiasm got to everyone and they came on board.

It was in those days that I discovered I wanted to become a mason. I would supervise the procurement of material as well as the work, observe the labourers and then give my input. I realized I had a knack for construction work.

Kalavati lost her husband and is single-handedly running her household from her construction earnings.