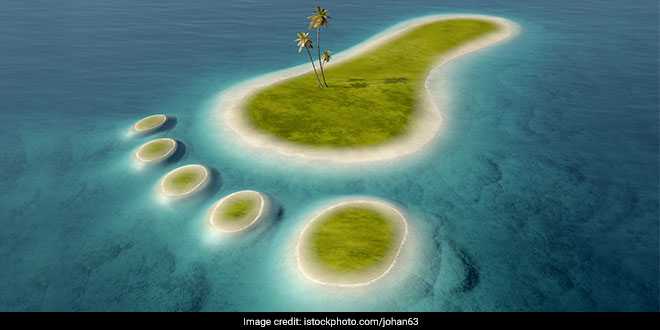 New Delhi: Climate change is a reality that we cannot live in denial about anymore. It is a full-blown crisis and threatens the very existence of our planet. The onus is on each one of us to take steps to fight for the survival of the only home known to man. One of the ways to do this is by reducing the carbon footprint, which refers to the amount of carbon dioxide released into the atmosphere due to individual, organisation or community actions. From driving a car to using appliances for heating and cooling at home or lifestyle decisions of what to consume, all contribute to the carbon footprint.

On June 5, the world will celebrate 46th World Environment Day with the theme Beat Air Pollution. Mark the day with a pledge that you will do your bit towards the planet, here are some tips to reduce the carbon footprint that will help you get started.

Also Read: World Environment Day 2019 To Be Celebrated On June 5 With Beat Air Pollution As The Call To Action

The kind of food we eat also contributes to the carbon footprint, because of the greenhouse gas emissions produced at every stage of growing, rearing, farming, processing, transporting, storing, cooking and disposing of the food. According to Green Eatz, an online organization that measures the impact food and nutrition have on our health, the environment and animals worldwide, states that meat and dairy are responsible for about 14.5 percent of manmade global greenhouse gas emissions. Moreover, if every day one forgoes meat and dairy, then one can reduce the carbon footprint by 8 pounds—that’s 2,920 pounds a year. So, if one moves towards a vegetarian diet, one can have a large impact on the personal carbon footprint.

Experts say organic and local foods that are in season also helps in reducing the carbon footprint as transporting food from far away, whether by truck, ship, rail or plane, uses fossil fuels for fuel and for cooling to keep foods in transit from spoiling.

Apart from taking care of the ingredients, one should also follow few basic rules in the kitchen in order to reduce carbon footprint such as buy food stock in bulk when possible, use reusable bags and avoid plastic bags.

Moreover, plan meals and reduce the food wastage. In case of excess food, freeze and reuse the leftovers instead of simply throwing it in the dustbin.

Adopt reduce, recycling and reusing – the landfills are an incredible source of greenhouse gases and pollution, which gets worse as more trash that makes its way into the landfills. Recycling can cut the amount of garbage send to the landfills by up to 50% or more, suggest environmentalists.
In today’s time, there are several waste management services available online, so, one can easily follow the rules of recycling effectively. Opt for local kabadiwalas to sell off the paper, plastic or metal waste, whereas go online for managing e-waste or other kinds of waste effectively.

On average, a household of four could reduce their footprint by 1,930 lbs or 875 kilograms per year by recycling plastic, glass, magazines, newspapers, and aluminum and steel cans (EPA).

Do An Energy Audit

Assess energy usage to reduce wastage and be more efficient. Next is to change incandescent light bulbs (which waste 90 percent of their energy as heat) to light emitting diodes (LEDs). Though LEDs are costlier, they use a quarter of the energy and last up to 25 times longer. Other common ways in which one can reduce their carbon footprint is by switching lights off whenever needed.

Moreover, home appliances also account for a big share of the family’s carbon footprint. From refrigerators to washing machines, look out for the Energy Star label to compare the efficiency and find options that save on energy.

Transportation is the major source of CO2 emissions, on an average, a car produces about five tons of CO2 each year (although this varies according to the type of car, its fuel efficiency and how it’s driven). Drive less and opt for public transportation, carpool, rideshare or two-wheelers, as it reduces CO2 emissions and lessens traffic congestion.

Some studies and research have also found that aggressive driving can result in 40 percent more fuel consumption than consistent, so keep calm while driving and do your bit towards saving the environment.