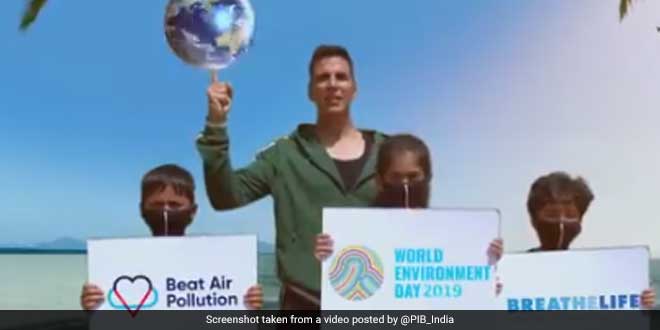 New Delhi: “Thodi hawa aane de, taazi hawa aane de” (Let some air come, let the fresh air come), read the lyrics of the ‘Hawa Aane De’ anthem launched by Secretary Ministry of Environment, Forest and Climate Change (MoEFCC), C.K. Mishra on Wednesday (May 29) at Indira Paryavaran Bhawan, ahead of the 46th World Environment Day. The ministry in collaboration with Bhamla Foundation, a Mumbai based non-governmental organisation (NGO), has produced the anthem to spread awareness about the problem of air pollution.

The anthem which is in line with the theme of the World Environment Day 2019 – Beat Air pollution, acts as a call to action for people to come together to combat the problem of poor air quality. The song urges people to be part of the solution and not add to the pollution. It offers solution for clean and green travel which broadly includes switching to public transport, car pooling, and turning off the engine at a traffic signal. It also asks people to put a full stop on the burning of stubble and waste, and support eco-friendly industrialisation. The anthem further highlights how we don’t value the things we get easily or for free like air.

Talking about the reason behind spreading the message of combating air pollution through song, Asif Bhamla, President, Bhamla Foundation, says,

Music has the power to inform, educate and unite people. We are grateful to the Ministry of Environment, Forest and Climate Change for their support to the campaign and thankful that the entire industry came together to support a cause as vital as this. Important messages need to be delivered to a wider audience.

Akshay Kumar, who features in the music video said,

If not tackled, air pollution will have a devastating effect on our country and the world. It is our responsibility to work towards reducing air pollution and leave a cleaner and greener world behind for our children.

The theme of #WorldEnvironmentDay2019 is #AirPollution. Secretary @MoEFCC today released a song #hawaaanede on the theme . It is a call to action for all to come together to improve the quality of air
Watch #hawaaanede ⬇️@akshaykumar @singer_shaan @RajkummarRao @SunidhiChauhan5 pic.twitter.com/ukBwxt1jcD

Why We Need To Take An Action Against Air Pollution?

According to the State of Global Air report 2019, air pollution was the fifth highest mortality risk factor globally and was associated with about 4.9 million deaths and 147 million years of healthy life lost in 2017. In India, an estimated 846 million which is 60 per cent of the population were exposed to household air pollution and recorded the highest number of deaths that is 482,000 in 2017. Air pollution is now as dangerous for health as smoking. Worldwide life expectancy was reduced by a year and 8 months on an average due to air pollution, a loss that ranks just below that related to smoking.

To Eradicate Open Defecation, Uttar Pradesh’s Rural Gonda To Construct Over 26,000 Household Toilets Within A Month