24-year old Roshal Mascarenhas has been commuting by the crowded Mumbai local for more than four years from her house in Vasai to her office in Nariman point and before embarking on her 90 minutes journey to Vasai she often relieves herself at the pay-and-use toilet on the Churchgate station. Despite paying a fee of ₹ 2 over the years she has never seen the toilet clean. Like her millions of Mumbaikers use public toilets that are unclean on a daily basis.

In a first ever kind of an exercise, the Brihanmumbai Municipal Corporation (BMC) installed polling machines at 54 public pay-and-use toilets across the city to evaluate the cleanliness levels.

The voting machines were placed in December last year and within a span of four months, nearly 89 lakhs users have casted their votes.

The objective behind installing the voting machines was to measure the cleanliness levels of the pay-and-use toilets.

Many people have in the past have complained about the poor conditions of these toilets. It becomes difficult for the municipal workers to physically keep a check on every pay-and-use toilet. Hence we came up with this monitoring machine to know how unclean these toilets are, said Kiran Dighavkar, Additional Commissioner, BMC. 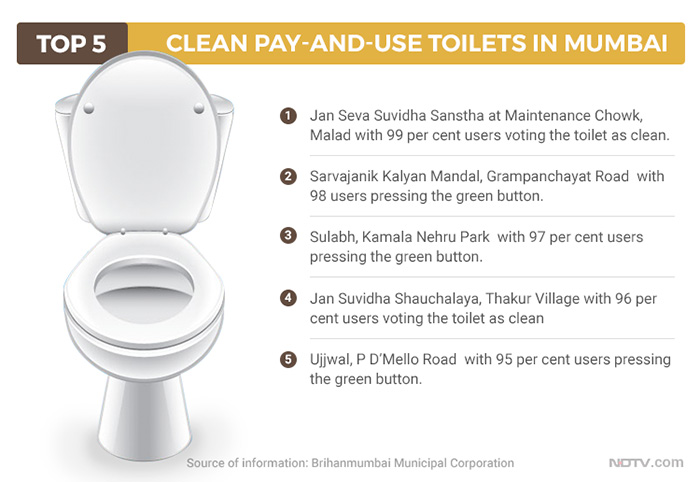 The voting machines had one question – ‘Kya yeh shauchalay swachh hai?’ (Is this toilet clean?). And based on the user’s experience he or she pressed one of the three buttons- red for dirty, yellow for ok and green for clean.

The polling machines are placed right next to the door. Based on my four years of experience of using these washrooms I pressed the red button. I hope a concrete action is taken to raise the cleanliness levels at the Churchgate station toilets, said Ms Mascarenhas.

The survey results were declared last week, where toilets at Churchgate station and Gateway of India featured among the top five dirtiest toilets. 83 per cent of the users gave a red signal to the toilet at Mumbai’s popular tourist spot – Gateway of India.

As per the survey, the toilet at Sarvalok Vikas Seva Mandal near Samtanagar Police Chowky in Kandivali was voted as the dirtiest toilet by a whopping 97 per cent of the users. Whereas 99 per cent of users pressed the green button and gave a thumbs to Jan Seva Suvidha Sanstha in Malad. 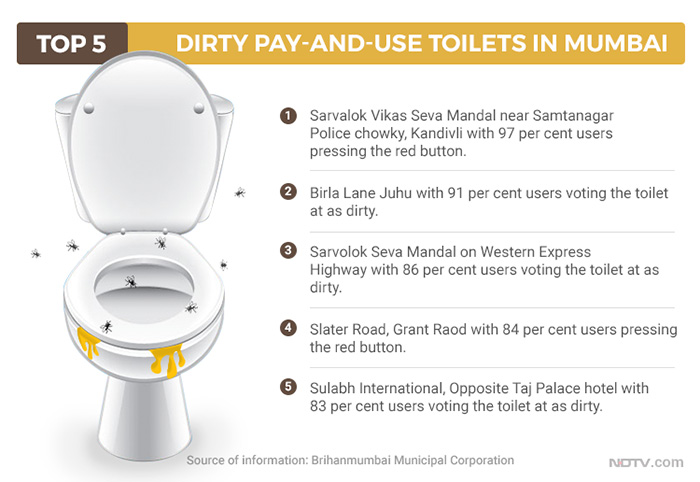 Post the survey, the BMC has given a period of 15 months to the authorities with unclean toilets to improve the cleanliness and sanitation levels. These pay-and-use toilets are maintained by several stake holders – NGOs, civic body and other non-profit organisations.

Considering the overwhelming participation by Mumbaikers, the BMC will soon initiate a second phase of voting at other pay-and-use toilets in the city.

As part of its water supply and sanitation initiative, Dehradun based NGO Himmotthan Society is helping people living rural areas of Uttarakhand get access to drinking water and basic hygiene care

Exclusive: Ahead of India’s Massive COVID-19 Vaccination Drive, Serum Institute’s Adar Poonawalla Explains How Vaccines Are Being Manufactured From The Facility