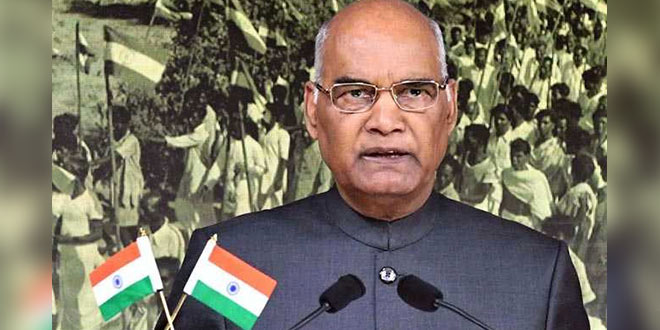 New Delhi: President Ram Nath Kovind in his Parliamentary address on January 29 spoke about how the government’s toilet building initiative under Swachh Bharat Abhiyan has ensured that women’s dignity and honour is maintained. The President was addressing a joint Parliamentary session to mark the beginning of Budget session. While outlining the current Union government’s achievements, the President highlighted that toilets were integrally linked to dignity of women and the campaign to build toilets has achieved unprecedented success.

During the address, President Kovind said that nobody thought how toilet construction would be helpful towards extending social justice. Hailing the Swachh Bharat Mission, the President said that construction of toilets was an extension of imparting social justice to weaker sections of the society. The construction of toilets not only gave a sense of dignity to women, but also provided them with a sense of social security. Calling the Swachh Bharat Abhiyan a social justice revolution, the President said that it was every individual’s responsibility to ensure a clean and open defecation free (ODF) India by October 2, 2019, on the occasion of Mahatma Gandhi’s 150th birth anniversary.

Nobody would have thought that even construction of toilets can be an extension of meting out social justice, said President Ram Nath Kovind.

Nearly 300 million women in India used to defecate in the open till 2014. Further, lack of separate toilets for girls in schools resulted in many of them dropping out after puberty. Lack of household toilets for women resulted in illnesses such as diarrhoea, anaemia, as well as often posed threats to their safety as they travelled long distances to relieve themselves either after sunset or before sunrise. Since its inception in October 2, 2014, the Swachh Bharat Abhiyan has seen the construction of over 6 crore toilets in rural India and 40 lakh toilets in urban India.

One of the main focus areas of the campaign has been better sanitation facilities for women across India and in the past three years, several states like Rajasthan, Kerala and Telangana have built women friendly toilets, called She-toilets across rural and urban India. These toilets have water sensors and sanitary napkin dispensers.

Also Read: Ladies Only: She Toilets, The Smart Toilets For Women

As a part of the Swachh Bharat Abhiyan, many district administrations have roped in women in toilet building activities and saw wholehearted participation from their end. In Rajasthan’s Dungarpur district, women themselves carried sand and cement to build toilets and to free themselves from the bane of defecating in the open. Many urban municipal corporations have also boarded the Swachh bandwagon and have introduced women only toilets. Thane and Pune in Maharashtra are two notable urban civic bodies that have built women only toilets which allow only women to access them, to ensure that women need not defecate in the open. Instances of refusal of brides like Puja Devi to marry unless the groom has a toilet at home show how toilet consciousness among women is growing in India.

In the joint Parliamentary address, the President also said that all newly built houses under the Union government’s housing schemes have been pre-installed with toilets to ensure that the problem of open defecation is rooted out. The President echoed the sentiments of Prime Minister Narendra Modi by branding the Swachh Bharat Abhiyan as a movement of the people that focused both on cleanliness and social justice.

With a sensitive approach towards providing housing with availability of water-electricity-toilet facility to all, my Government is targeting to provide a house to every poor and homeless household by the year 2022 #PresidentKovind