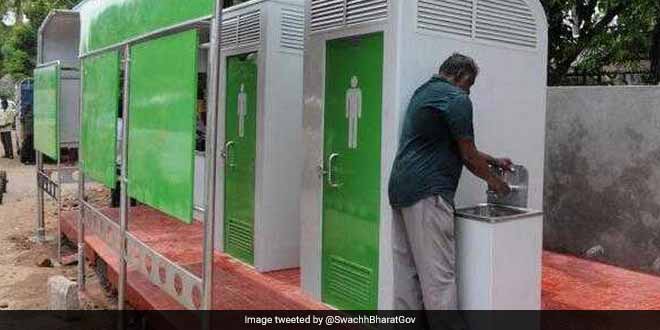 Nearing three years of completion, the Swachh Bharat Abhiyan has achieved much success in rural India, though the replication of the same has not been visible in urban spaces. Out of 1.25 crore number of toilets needed to make urban India open defecation free, so far after three years only 25 lakh toilets have been constructed so far. The problems in urban areas range from space crunch, rising population in metropolitan cities to outdated sewage systems. Tamil Nadu, like many other states is finding it difficult to tackle the problem of open defecation in its urban areas. Cities like Chennai and Madurai are still grappling with open defecation. The Chief Minister of Tamil Nadu, Edappadi K. Palaniswami, however, is confident that the state’s urban areas will become open defecation free by March 2018.

The assurance by the Chief Minister was recently tweeted by Durga Shanker Mishra, Secretary, Ministry of Urban Development (MoUD). The MoUD Secretary had met the Tamil Nadu Chief Minister to discuss the progress of urban development schemes. The task would not be easy as eradication of open defecation from major cities has posed to be a challenge for the Swachh Bharat Abhiyan on the whole. Tamil Nadu had earlier committed to eradicate open defecation from the state by 2015 but it will be a while before the state achieves the 100 per cent ODF status, as its current sanitation coverage is little above 76 per cent. Nearly 25 per cent of Tamil Nadu’s 89 lakh urban population has no access to household toilets.

Met with the Hon'ble CM, #TamilNadu to discuss progress of various Urban and Housing Schemes and Metro Projects. pic.twitter.com/rv1f01cal8

Urban sanitation in Tamil Nadu was taken up seriously even before the Swachh Bharat Abhiyan was formally launched.  One of the major initiatives taken in 2013 was the installation of ‘Namma Toilets’ in the state’s major cities, by the Commissionerate of Municipal Administration, Tamil Nadu. High quality public toilets were installed across 385 sites all across the state. It came with high quality interior lights, ventilation and continuous water supply. In four years, Namma Toilets have become very popular across all the major cities in the state but in the past four years, their conditions have also changed. Conceived as a one-stop solution for urban sanitation, maintenance has taken a backseat in many such toilets and the once bright LED lights are no longer flickering.

Coimbatore is the only open defecation free (ODF) city in Tamil Nadu but the state government wants other cities to join the list. In February this year, at a conference on faecal sludge management, the Ministry of Urban Development announced that though eight municipalities and 21 town panchayats had become ODF since the launch of the Swachh Bharat Abhiyan, no city other than Coimbatore has become ODF.

Going ODF has proved beneficial for Coimbatore, as the city went up two places and secured the 16th rank in this year’s Swachh Survekshan. The continuance of open defecation however, resulted in major Tamil Nadu cities slipping in Swachh rankings this year. While Madurai was ranked 57 this year, compared to its previous ranking of 26, Greater Chennai had a steep fall to rank 235 from the previous rank of 36. The survey showed that sanitation in these Tamil Nadu cities was still not up to the mark. Greater Chennai especially lacked in construction of public toilets and maintenance of existing ones. The Survekshan survey team found 571 of 866 toilets to be damaged in Chennai, resulting in the city’s slip in rankings.

For Tamil Nadu’s urban areas to become ODF by March 2018, the major cities of Chennai, Madurai and Tiruchi will have to step up and ensure speedier construction of public toilets. At present, Chennai has roughly 700 public toilets for its population of over 50 lakhs, a grossly inadequate ratio. Urban sanitation goals can only be achieved by building more public toilets and granting people adequate access to the same.