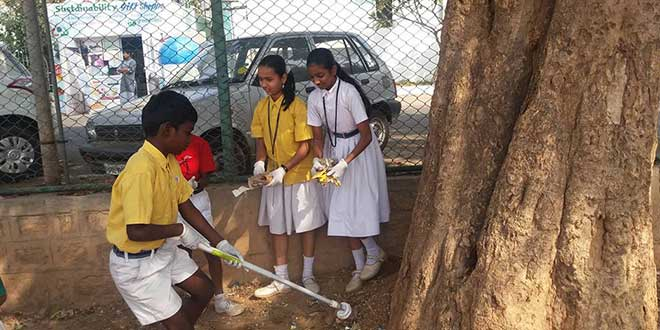 New Delhi: The Trichy Municipal Corporation is not just tapping school students to spread the idea of waste management in the city but is also incentivising them for the job innovatively. This academic year, the city school students will receive a green report card, an assessment of the work they have done to adopt solid waste management practices. The green report card will be over and above the usual academic report card. As part of this exercise, the civic body in association with the respective school management will grade students based on the support shown by their respective households to adopt solid waste management (SWM) practices. Also, based on the grades, a top-performing student from every school in the city will be awarded a prize.

According to the civic body officials, this exercise is being undertaken to commemorate the first anniversary of the launch of waste segregation at source in the city. On the occasion of World Environment Day on June 5, 2017, the Trichy Municipal Corporation launched its ambitious plan to segregate solid wastes at source across the city. Through the implementation of waste segregation at source (segregating the bio-degradable and non-degradable waste before handing over the same to the sanitary workers separately), the civic body has managed to collect and process 416 million tonnes of waste per day. The city with 2.3 lakh households in the city generates about 436 million tonnes of waste per day.

According to the civic body’s statistics, three-fourth of the city’s households have school going children.

Segregation of waste as biodegradable and non-biodegradable at source needs more sensitisation, especially among the children, so they motivate their family members to continue segregating the waste at source, and start doing it in case they are not. Such initiatives creating awareness on segregating waste at source among school students would compel entire households to comply with the solid waste management practices. Learning about waste and recycling is an activity that even children should participate in, explained N Ravichandran, Commissioner, Trichy Municipal Corporation.

Also Read: Trivandrum’s Green Army Is Mentoring Students To Become Experts At Managing The City’s Waste And Make It Cleaner

A total of 205 schools including private and government institutes will distribute green report cards to students from June 2018 through the respective school managements.

“The green report cards will have two questions – one will be on whether segregation of waste at source is being practised at home and the second will be on the availability of two separate bins each for biodegradable and non-biodegradable waste,” said one of the municipal corporation’s official.

When asked about how the evaluation will be done, the municipal official said:

The month-long evaluation will be conducted in July with parents, sanitary workers and sanitary supervisors recording their findings in the card. The evaluation process will be held every day and by the end of the month the green report card carrying the signatures and findings of parents, sanitary workers and sanitary supervisors will be handed over to the school management.

Among the top performers, a computerised lot system will select a student from every 205 schools to award the prize.

Notably, the Trichy Municipal Corporation has been working hard to spread awareness on the benefits of segregating the waste at source. In February, the civic body released a short film that highlighted the dangers of dumping waste in open drainage canals, urinating in public places, open defecation and not cooperating with sanitary workers to segregate waste at source.

For effective source segregation, nearly 20000 bins given to 10000 households of ward 8&10 in #Trichycorporation . These bins are sponsored by lion dates industry under CSR at the cost of Rs 15 lakhs pic.twitter.com/7F3xMx80I8

Students From A Delhi School Are Strengthening Water, Sanitation & Hygiene (WASH) Concepts. Here’s All That They Are Doing