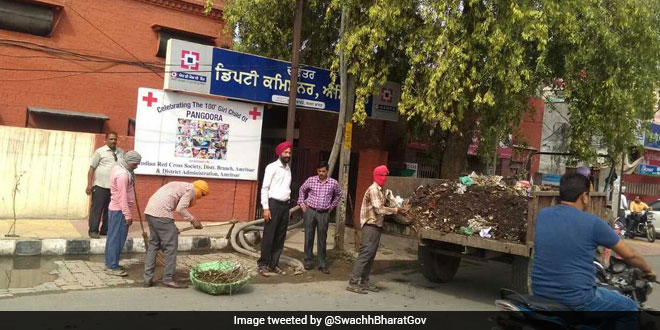 New Delhi: Throw garbage in the open? A resident of Punjab may have to think twice, as it could mean shelling out anything between Rs 500 and Rs 5,000. The Local Bodies Department in Punjab has announced medium to heavy penalties on waste disposal, as per the newly drafted Punjab Model Solid Waste Management Rules, Cleanliness and Sanitation Bylaws, 2018. The department has asked all civic bodies to implement the rules, to ensure that open disposal of waste is tackled strictly. Though the department has asked local civic bodies to provide suggestions on the newly drafted laws, it has announced that the imposition of fines should be adopted by all civic bodies across the state.

Punjab generates over 4,200 tonnes of municipal solid waste daily, less than 40 per cent of which is recycled. The Solid Waste Management Act of 2015 has not been duly implemented in the state, resulting in waste becoming a major problem for cities like Jalandhar, Ludhiana and Amritsar. In the past two years, door-to-door waste collection in the state has not shown much improvement, prompting the state government to impose fines.

In the last two years, waste segregation has not been implemented with much success in the major cities of Punjab. Waste collection is also low. But though we are trying to improve these areas gradually, the habit of people throwing waste on roads or disposing them casually continues to be present. Hence, we have decided to tackle this problem in a stricter manner, said Bahader Singh, Superintendent, Punjab State Urban Development Authority.

The bylaws have proposed a range of fines against any activity that is remotely related to waste disposal or goes against the cleanliness laws in any manner. So not only will fines be imposed on waste disposal, but defacing of walls or public/private property by spitting or open urination will also attract fines of up to Rs 500. The newly drafted municipal bylaws have taken into consideration the problem of biomedical waste, and hospitals or medical centers found improperly disposing of biomedical waste will be fined Rs 2,000. Similarly, burning of waste which causes air pollution will also attract a fine of Rs 5,000. The urban development authority is confident of curtailing open disposal of waste through these fines.

“We are encouraging activities like waste segregation and composting, but decades old habits will take some time to be changed. If people  know that they will be fined high amounts on disposing waste or spitting openly, they will cease to engage in such activities,” said Mr Singh.

On objection to imposition of fines as it negates the behavioural change aspect of Swachh Bharat Abhiyan, Mr Singh said:

“We are working on improving waste management and treatment infrastructure across the state. Civic bodies have been asked to procure more waste collection vehicles and increase door-to-door collection rates. But people should not keep disposing garbage openly. Segregation and composting are viable options. We have been encouraging people to practice them,” said Mr Singh.

While fines have existed for a long time as a part of municipal laws, their implementation has always been shaky. By covering every possible angle related to waste management, the new municipal bylaws in Punjab have ensured that no illegal form of waste disposal goes unpunished. Over to implementation now.

Shun Plastic, Click A Selfie And Earn Rewards: Jamshedpur’s New Move To Curb The Use Of Plastic Bags

Poor Air Quality Affects People In Rural Areas As Much As In Cities: Study