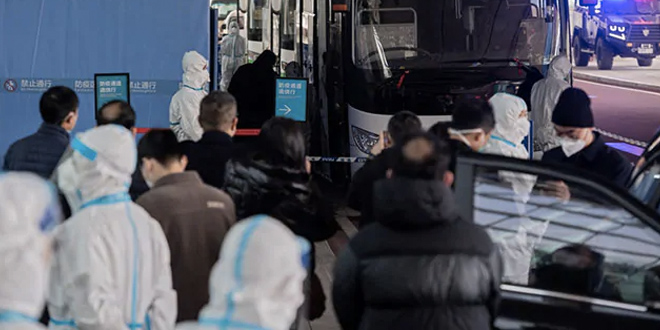 Wuhan: Two members of a World Health Organization-led team that arrived on Thursday (January 14) in China’s Wuhan city to investigate the origins of COVID-19 remained behind in Singapore after testing positive for coronavirus antibodies, the global body said. The team of 15 had all tested negative for the disease prior to leaving their home countries, and underwent further testing while in transit in Singapore. The results of nucleic acid tests were negative but showed two of the members had coronavirus antibodies, the Geneva-based agency said in a tweet. “They are being retested for both IgM and IgG antibodies,” the WHO said.

It is the latest setback for a mission beset by delay as well as concern over how much access the team will get. The rest of the team arrived in Wuhan from Singapore late on Thursday morning on a budget airline and they were expected to head into two weeks of quarantine.

“Relevant epidemic prevention and control requirements and regulations will be strictly enforced,” Chinese foreign ministry spokesman Zhao Lijian told a regular briefing on Thursday in response to a question about the two team members.

The team tasked with investigating the origins of the novel coronavirus that sparked the global pandemic had been set to arrive earlier this month. China’s delay of their visit drew rare public criticism from the head of the WHO. The group left the airport terminal in Wuhan through a plastic quarantine tunnel marked “epidemic prevention passage” for international arrivals and boarded a cordoned-off bus that was guarded by half a dozen security staff in full protective gear. The coronavirus was initially linked to a seafood market in the central city of Wuhan.

Team members did not speak to reporters, although some waved and took pictures of the media from the bus as it departed.

The United States, which has accused China of hiding the extent of its initial outbreak a year ago, has called for a “transparent” WHO-led investigation and criticised the terms of the visit, under which Chinese experts have done the first phase of research.

The team arrived in China as the country battles a resurgence of coronavirus cases in its northeast after managing to nearly stamp out domestic infections in recent months.

Peter Ben Embarek, the WHO’s top expert on animal diseases that cross to other species, who went to China on a preliminary mission last July, was leading the team going to Wuhan, a WHO spokesman said previously. Hung Nguyen, a Vietnamese biologist who was part of the team, told Reuters during a stopover in Singapore on Wednesday that he did not expect any restrictions on the group’s work in China, but cautioned the team might not find clear answers.

After completing quarantine, the team will spend two weeks interviewing people from research institutes, hospitals and the seafood market in Wuhan where the new pathogen is believed to have emerged, Hung added. The group would mainly stay in Wuhan, he said.

Last week, WHO director-general Tedros Adhanom Ghebreyesus said he was “very disappointed” that China had still not authorised the team’s entry for the long-awaited mission, but on Monday, he welcomed its announcement of their planned arrival.

What we would like to do with the international team and counterparts in China is to go back in the Wuhan environment, re-interview in-depth the initial cases, try to find other cases that were not detected at that time and try to see if we can push back the history of the first cases, Ben Embarek said in November.

China has been pushing a narrative via state media that the virus existed abroad before it was discovered in Wuhan, citing the presence of the virus on imported frozen food packaging and scientific papers claiming it had been circulating in Europe in 2019.

“We are looking for the answers here that may save us in future – not culprits and not people to blame,” the WHO’s top emergency expert, Mike Ryan, told reporters this week, adding that the WHO was willing to go “anywhere and everywhere” to find out how the virus emerged.

Other team member Marion Koopmans, a virologist at Erasmus University Medical Center in the Netherlands, said last month it was too soon to say whether the SARS-CoV-2 virus had jumped directly from bats to humans or had an intermediate animal host.

At this stage what I think we need is a very open mind when trying to step back into the events that led eventually to this pandemic, she told reporters.

Will We Have A Choice For COVID-19 Vaccine? Does People Who Have Contracted COVID In Past Need To Get Vaccinated? An Expert Explains It All