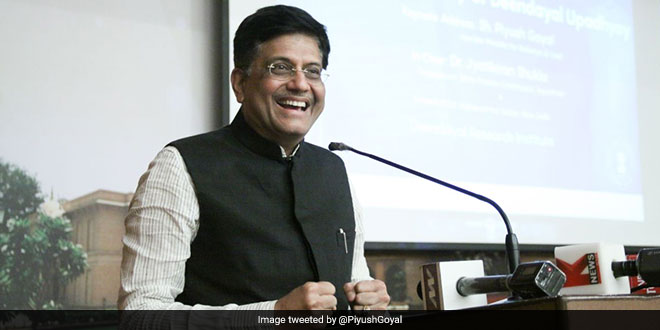 New Delhi: “Recently, on my way back from my hometown, I got my periods. Unfortunately, I was not carrying a sanitary napkin with me and I was in a train. I thought, I will get down at the next station and purchase a pack of sanitary napkins from some medical shop, but the problem was more serious than I thought. Neither did the train stop at every station for a longer duration nor was there a medical store. Trust me; this is one of the worst things that can happen with someone”, says 28-year-old Monica Sharma. Monica is not the only girl who has faced such problem. In India, only 12% of the menstruating women have access to sanitary napkins and other depends upon unhygienic alternatives like sand, dust, cloth, etc.

With a motive to change the sad reality of menstrual hygiene in India and solve the problems faced by commuters on a regular basis, Union Railway Minister Piyush Goyal on Monday said, he wants to run a campaign to ensure every woman in India have access to sanitary napkins. The Railway Minister was speaking on the ‘Relevance of Economic Philosophy of Pandit Deendayal Updadhyaya in Today’s World’ and it is then he talked about facilitating manufacturing units for low-cost and bio-degradable sanitary napkins at 8,000 railway stations of the country.

The railways will help as much as possible, be it providing manufacturing facility on railway stations…such pads can be manufactured on 8,000 locations. Self-help groups can manufacture them…women themselves can make them in hygienic conditions. Railway stations have terraces where they can work. Machines used for the purpose are also not that expensive, he said.

Mr Piyush Goyal also said that he is in talk with Women and Child Development Minister Maneka Gandhi for this who recently launched #YesIBleed campaign. Further focusing on the issue of making sanitary napkins available to every woman, Mr Goyal said that sanitary napkin vending machines could be a part of the primary healthcare centres with Jan Aushadhi stores being planned on the station premises.

We should run a campaign across the country to ensure all women get the benefit of such pads. We have to get economies of scale. We should produce these on a large scale and instead of the expensive pads produced by big companies; women can get it for Rs. 1-Rs. 1.5. I have started speaking with Manekaji (Maneka Gandhi) on the issue, he said.

This is not the first time that Mr Goyal has started a talk on menstrual hygiene. The minister recently gave his nod to install sanitary napkin dispensers and incinerators at about 200 major railway stations across the country by March 8.

Dedicated towards the cause of menstrual hygiene, the Railway Womens Welfare Central Organisation (RWWCO) on January 1, started an initiative ‘Dastak’ at its Sarojani Nagar branch. The project ‘Dastak’ aims at producing low-cost, eco-friendly and hygienic sanitary pads. Impressed by the efforts, Mr Goyal lauded the project.