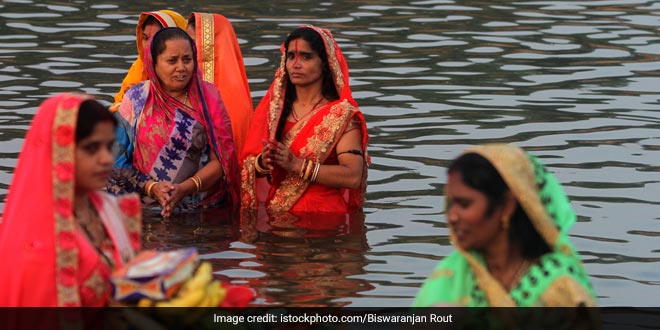 Lucknow: Uttar Pradesh Chief Minister Yogi Adityanath on Sunday greeted people at the Laxman Mela Ground in the state capital celebrating Chhath, a festival dedicated to the worship of the Sun. On the auspicious occasion, the National President of All India Bhojpuri Samaj Prabhunath Rai honoured the Chief Minister by offering flowers, ‘Angavastra’ and a memento.

Chhath represents public faith. The festival involves unity and brings people together. This great festival of public faith should become a factor of happiness, prosperity and health for the entire creation, this is the wish. Jai Chhath Mayiya!

Mr. Yogi further assured that the government and administration have made foolproof arrangements for the convenience of devotees during the festival and utmost importance has been given to the maintenance of safety standards.

The CM said that the campaign for the cleanliness of rivers has been taken forward unitedly. Resultantly, the Gomti river is in a cleaner form today. Chhath promotes unity, social harmony and prosperity of the society as a whole.

The CM also urged the people to celebrate the festival in a way that is environmental-friendly and that does not cause pollution in any manner. Deputy CM Brajesh Pathak, Chief Secretary Durga Shankar Mishra, and Principal Secretary to CM Sanjay Prasad were also present on the occasion.

Chhath Puja is an ancient Hindu Vedic festival that is mainly celebrated in Bihar, Jharkhand and Eastern Uttar Pradesh in India and Nepal. Also referred to as Surya Shashti, Chhath, Mahaparv, Chhath Parv, Dala Puja, Pratihar and Dala Chhath, the four-day-long festival is dedicated to the deity Surya and Shashthi Devi.

As part of the ritual, women fast for the well-being of their sons and the happiness of their families. They also offer Arghya to Lord Surya and Chhathi Maiya.

The four-day festival started on October 28, Friday, with the main day and the last day of the puja, being celebrated on October 31, which is falling on Monday. On each day, people observe the Chhath and follow rigorous rituals. As per Drik Panchang, sunrise on Chhath Puja will be at 06:43 am, and sunset will happen at 06:03 pm. The Shashthi tithi begins at 05:49 am on October 30 and ends at 03:27 am on October 31.