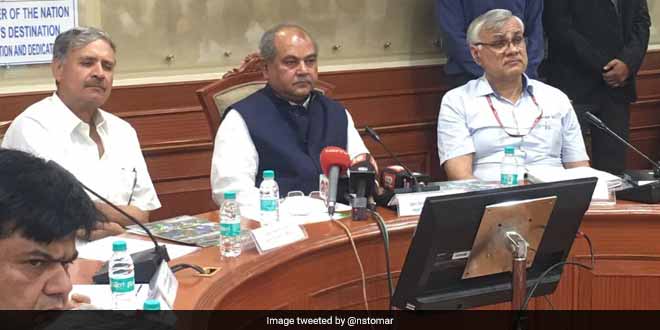 New Delhi: With construction of more than 4 and a half crore toilets in last 3 years, 5 states, 940 cities, 155 districts and more than two lakh villages have been conferred upon with the status of open defecation free (ODF). Adding weightage to the existing figures, Minister for Drinking Water and Sanitation Narendra Singh Tomar on July 31 said that on Mahatma Gandhi’s birth anniversary, nine Indian states will declare its respective urban areas free from open defecation. He announced this during the launch of Swachh Survekshan 2018 in New Delhi.

Of the 9 states, 5 states are likely to be Madhya Pradesh, Maharashtra, Chhattisgarh, Jharkhand and Telangana. On July 5, Urban Development Secretary, Durga Shanker Mishra in a review meeting of Swachh Bharat Mission (Urban) had named these states.

Pointing out to stark reality of open defecation in urban areas the minister said, “Due to urbanisation and rapid development we often feel that urban areas are better off in sanitation related issues especially in access to toilets. However the issue of open defecation is as serious as it is in rural areas.” He further said that 1187 cities have self-declared themselves ODF and third party verification is presently being conducted in 949 cities.

States like Kerala, Uttarakhand, Haryana, Sikkim and Himachal Pradesh are already free from open defecation and two other states will soon be declared ODF, “2 states declared their urban areas as ODF, the verification process has been initiated,” hinted Mr Tomar at the launch. As for the 2017 Yearender, the government has set a target of declaring 300 districts ODF and making 10 states from the northern and north-eastern belt free from open defecation.

The government aims to bring 100% toilet access in all the states of India by October 2, 2019 to mark the 150th anniversary of Mahatma Gandhi.

Sand Art For Swachh Cause: Sudarsan Pattnaik Will Create Sand Art On #SaveOceanSaveEarth In An International Competition