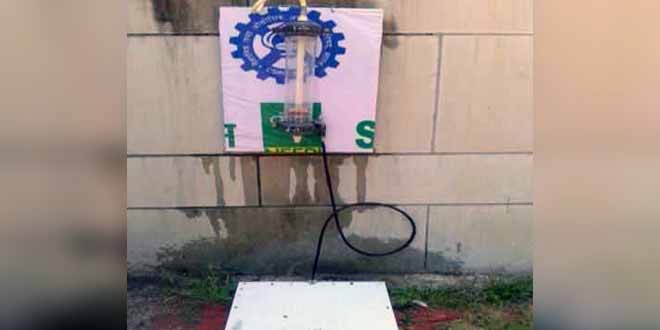 Low on cost and high on water efficiency, a smart toilet solution for rural India is what the National Environmental Engineering Research Institute (NEERI) has developed. This toilet system hopes to encourage rural India to invest in toilets and simplify maintenance. Given that cost of building a toilet and the need for sufficient water to maintain it are cited as common deterrents for building toilets.

A traditional flush urinal uses 4 litres of water in a single flush. Unavailability of a flushing system also often results in more water required than usual to wash down the waste. Other problems in many rural toilets are manually operated urinals which are too high or improperly mounted and prone to getting dirty. Maintenance of toilets and urinals is also expensive, resulting in low interest in building these, especially in rural areas.

Traditional toilets require a lot of water and proper maintenance from time to time, but are cost intensive. If sanitation is to become a national priority, alternative low cost solutions should be in place, especially in areas where traditional toilets are not an option. This was the primary motive behind developing the low cost urinal system, said Sushant Wath, Senior Scientist, Business Development and Technology Transfer, NEERI.

The urinal, which has been named as ‘Low Cost Mechanical Automatic Urinal – Toilet Flusher’ was designed to overcome the basic challenges of excessive water usage in toilets and urinals. The objectives to develop the flush system were to ensure minimum maintenance as the flush will automatically and regularly wash the urinal every time it is used. The flush system can also be fixed with new and existing urinals, and hence there is no need to construct urinals afresh to fit the NEERI developed flush system.

The flush system consists of a mechanical platform which gets compressed under the weight of a person standing on it. The spring mechanism with which the flush system is fitted, allows the inlet to be opened filling the in-built water reservoir, which in turn releases the water into the urinal. The flusher thus works without electricity and is dependent completely on its in-built mechanisms.

Among several advantages of the NEERI developed flusher system is its zero dependency on any manual or electronic trigger to make it work, thus significantly making it a cheaper investment. Equally importantly, the flusher ensures absolutely zero wastage of water and has the ability to become an asset for sanitation in water deprived areas.

Health risks due to poor sanitation facility are a common occurrence across India and unavailability of water is the biggest reason behind dirty urinals and toilets. We wanted to develop a device which would use minimum water with maximum results and put to rest water worries related to sanitation, said Mr Wath.

NEERI estimates that in an establishment like an office or a school with an average number of 1,000 people, can save up to Rs 2 lakhs (Rs 2,16,000) annually, as it utilises no more than a litre of water in each flush. For public toilets, this must come as a boon as many municipalities often cite water wastage and maintenance costs as challenges for building public toilets. Mr Wath and his team are hopeful that this flusher will be taken up by civic bodies when constructing toilets, as installation of the flusher will inevitably lead to saving of water and better maintenance in public toilets.

The system has entered its last phase of research and four units of the flusher are placed in Maharashtra’s Khapri village as a part of the testing phase. Once each flusher achieves 4,000 flushes without any hiccups, NEERI plans to roll it out for buyers in the market. The research institute is primarily looking at Sulabh toilets, schools, municipal toilets and urinals at railway stations as potential buyers.

For the Swachh Bharat Abhiyan to wholly succeed, innovations such as the low cost flusher are necessary to bring in the much needed sanitation revolution.