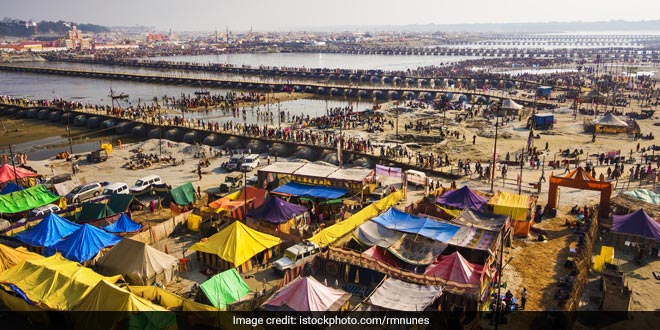 Mumbai: Home to three of the most sacred rivers of India: Ganga, Yamuna, and Saraswati at Triveni Sangam, the Allahabad Kumbh Mela witnesses millions of visitors over a three-month period. In a bid to give a safe and hygienic experience to the devotees that will travel from all across India and the world, Uttar Pradesh Chief Minister Yogi Adityanath has announced installation of 1.2 lakh toilets in the city ahead of the mega mela that will be held next year from January to March. The Chief Minister has directed the concerned officials to complete the mammoth task by the end of November.

The preparation for the Ardh Kumbh Mela 2019 have already begun. I have asked all the officials to complete the work of providing necessary infrastructure before November 30 at any cost. This will be the first time when the message of Swachh Bharat Abhiyan will be spread in Kumbh Mela. We will be installing 1,22,000 toilets and every toilet will be connected to a septic tank. The tanks will be duly cleaned and for the same a plan has been chalked out ensuring zero leakages, the Chief Minister said.

Besides the toilets, 20,000 community urinals will also be installed during the Ardh Kumbh Mela. Nityananda Ray, an official from National Mission Clean Ganga (NMCG) said that having enough toilets and urinals during the mela is a must as the massive fair will be held very close to the ghats of Ganga river.

Being the largest religious gathering, the Ardh Kumbh Mela, is considered to be very sacred and involves ritual bathing at the Triveni Sangam. Many people, while bathing, relieve themselves in the river without realising that along with making prayers in the river, they are polluting the holy river. Urinals and toilets will keep this problem at bay and help the mela become a Swachh Kumbh Mela, the official said.

Chief Minister Adityanath has also asked the officials to focus on sewage and other kinds of waste being discharged in Ganga. While reviewing the work plan for cleaning tributaries of Ganga in June this year, he had said officials must ensure that no waste is dumped in the river post December 15.

In terms of maintaining overall cleanliness in the city, the NMCG will also set up 16,000 dustbins throughout Allahabad for proper disposal of waste. These will be regularly cleared and the collected waste will be sent for disposing at nearby waste treatment plants. The NMCG is confident that such a large number of dustbins will ensure a cleaner Kumbh. The NMCG will also encourage through Information, Education and Communication activities people to keep their surroundings clean during the festival, use toilets and dustbins regularly.

Emergency Plan To Combat Air Pollution Rolled Out In Delhi-NCR