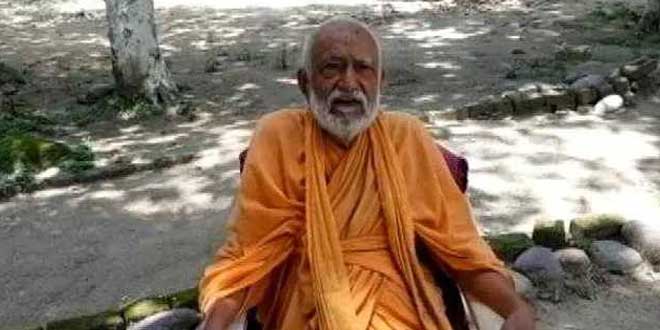 New Delhi: The 86-year-old former Indian Institute of Technology, Kanpur professor, Gurudas Agarwal also known as Sant Swami Gyan Swaroop Sanand, died after a heart attack at All India Institute of Medical Sciences (AIIMS) at Rishikesh, Uttarakhand on Thursday. He had been on a fast unto death since June 22 to put pressure on the government to take some concrete steps to clean up Ganga. During his 111 days fast he demanded government measures for a pollution-free and uninterrupted flow in the Ganga in its natural form. He was admitted to the hospital on Wednesday after he even gave up water. Dr Ravi Kant, Director AIIMS, Rishikesh said, “GD Agarwal suffered from hernia, high blood pressure and coronary artery disease and the fast worsened his condition.”

Also Read: ‪Ganga Can’t Be Clean Unless Its Tributaries Like Yamuna Are Clean: Nitin Gadkari‬

Mr. GD Agarwal, who taught at IIT-Kanpur for 17 years, was the Patron of an NGO named the Ganga Mahasabha founded by Madan Mohan Malviya in 1905 and also served as the first member-secretary on the Central Pollution Control Board. Mr. Agarwal had protested against hydroelectric projects on the Ganga’s tributaries and had demanded a law to protect the river.
Union Water Resources and Ganga River Rejuvenation Minister Nitin Gadkari termed GD Agarwal’s death ‘an irreparable loss to the nation’. The former environment minister said, “He was an indefatigable crusader not only for Nirmal Ganga (unpolluted Ganga) but also for Aviral Ganga (free-flowing Ganga). It was my privilege and good fortune to be able to implement some of his important suggestions to ensure uninterrupted flow in the Ganga and its tributaries in Uttarakhand”.

Saddened by the demise of Shri GD Agarwal Ji. His passion towards learning, education, saving the environment, particularly Ganga cleaning will always be remembered. My condolences.

Sunita Narain, Director of Centre for Science and Environment (CSE) called environmentalist Agarwal a phenomenal scientist who was one of those who started fight against pollution in India and was passionate and committed to Ganga.

GD Agarwal was phenomenal scientist. Started India's pollution work; passionate and committed to #Ganga. Did not need to die.

Describing Mr. Agarwal as “the true son of mother Ganga”, Congress leader Rahul Gandhi said he gave away his life to save the river. “Saving the Ganga is like saving the country. We will never forget him and will take his fight forward,” Mr. Gandhi said on Twitter.

Inputs from Press Trust of India