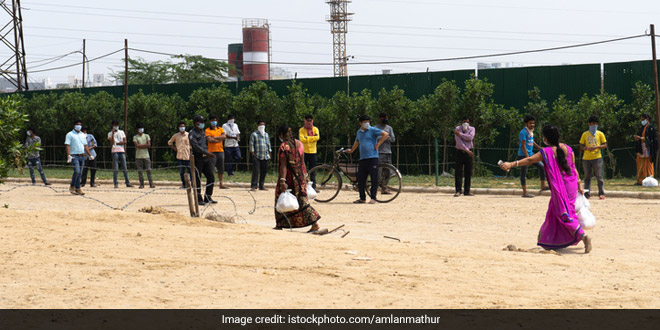 New Delhi: To fight the malnutrition crisis such as wasting (low weight for age), stunting (low height for age), the Uttar Pradesh government has decided to rope in 68,000 self-help women groups and provide them with employment opportunities. The government has given these women the duty of providing nutritious Take Home Ration to the beneficiaries in their villages and blocks.

Take Home Ration is the government scheme under the Integrated Child Development Services (ICDS) that targets children under 6 years of age and pregnant and lactating women. Through the scheme, the ration that consists of staple food such as rice, pulses, wheat, and oil is given to the beneficiaries for consumption at home. This is necessary for building the health of expecting mothers, new-born babies and children under the age of 6-years and build swasth (healthy) communities. Explaining the initiative to NDTV, Sujeet Kumar, Mission Director, Uttar Pradesh State Rural Livelihood Mission (UPSRLM) said,

The difference in this initiative is the fact that earlier the Take Home Ration service was being taken care of by a centralised body, through which different companies were providing the Take Home Rations which was then distributed by the Anganwadi workers. There were too many people involved in this system and off late, we started to get a lot of complaints regarding the quality and quantity of ration being supplied to the beneficiaries. Most of the time, the ration would never used to reach the beneficiary. So, we decided to break it down into a simple formula. In the whole of Uttar Pradesh, now Take Home Ration is procured locally within the village by the village people.

Explaining further Mr Kumar said that the government has roped in 68,000 self-help women groups in the state for this initiative, with each group consisting of 10-12 women that helps in the distribution of the ration to 1.5 lakh Anganwadi Kendras (centres) in the state. Mr Kumar added,

Roughly, one self-help women group is able to distribute the Take Home Ration to two to three Anganwadi centres that have around 80-100 beneficiaries. So, overall, through this initiative, the Uttar Pradesh Government is being able to cover approximately 1.6 crore people. Basically, all the villages and blocks in the state have these self-help women groups who are employed by the government and they are now ensuring that the village people get the basic nutrition in right amount and quality.

The principle behind providing take home ration is to fill in the nutrition gap and improve Infant and Young Child Feeding (IYCF) practices among infants and young children and provide a good source of nutrition to the expecting mothers. As part of take home ration, products (ready to eat and ready to cook food), dry rations and hot cooked meals are provided.

Highlighting the benefits of this initiative, Mr Kumar said,

Women of a particular village or block have a special connect with their area people. By involving the village women in the fight against malnutrition and delivering the Take Home Ration, it will ensure that all the beneficiaries get their right nutrition at the right time as they will know their area well. Just like we know who lives in our neighbourhood, who has how many children, these self-help women group also know who are the beneficiaries, who needs this ration the most, who has a new-born baby or expecting mother. This ensures the delivery of ration smoothly.

Explaining the chain and working process of this Take Home Ration system in Uttar Pradesh, Mr Kumar added that earlier this scheme was being run by the ICDS department completely, they used to send money for the ration to the centralised vendor, who further used to give it to the Anganwadi centres. He added,

Now the same money is being transferred to these self-help women groups of particular villages. These women manage the money, procure the food staples, pack it and then further deliver to the beneficiaries. Via this chain, the self-help women groups are able see some money as well. Roughly, the women are able to save Rs. 10,000-12,000 a month, which they take home as their profit. In simple terms, just like we manage our monthly house expense, get our rations, these women also have the duty to get the rations for the beneficiaries and deliver it to them in a particular budget. Since they are buying the materials locally the cost is less as a result they save money.

Mr Kumar said that one of the major benefits of this initiative is that the state doesn’t need to spend an extra amount on audit teams who can ensure there is no loophole in the ration distribution system.

NDTV also spoke with a few of the women beneficiaries and self-help women group workers. Anu Devi, who is from self-help group ‘Jai Maa Kali’, from Mahila Gram Sanghathan added,

I am part of the self-help-group in my village, I am working as well as the beneficiary of the Take Home Ration scheme. Earlier, the food we used to get was of very low quality, plus the quantity was very less. Since the time the government has roped us in the procurement and distribution of the ration, both these problems have been resolved. Many times, the food also used to get infested by insects as the ration used to stay at filthy godowns. However, since we have taken over the task, we ensure the good quality of the food to reduce the burden of malnutrition in children of our block. We procure the staples like rice, pulses, wheat, milk and oil from our village only at the best possible price, then pack it up and distribute it to the village people. In winters, sometimes, we also make Panjiri for expecting women and give it to the beneficiaries. Our bond with village people is unique, they also listen to us and follow the same as they know we are one of them only.

I am the President of Sheetla women self-help group. My group has been given the duty of distributing dry rations under the Take-Home-Ration Scheme. This work is managed by me and my group’s secretary Sona Devi together. We enjoy the work because on one hand, it adds to my family’s income and on the other hand, there will be availability of good and nutritious food for the women and children of our village. We are all happy to get this work. 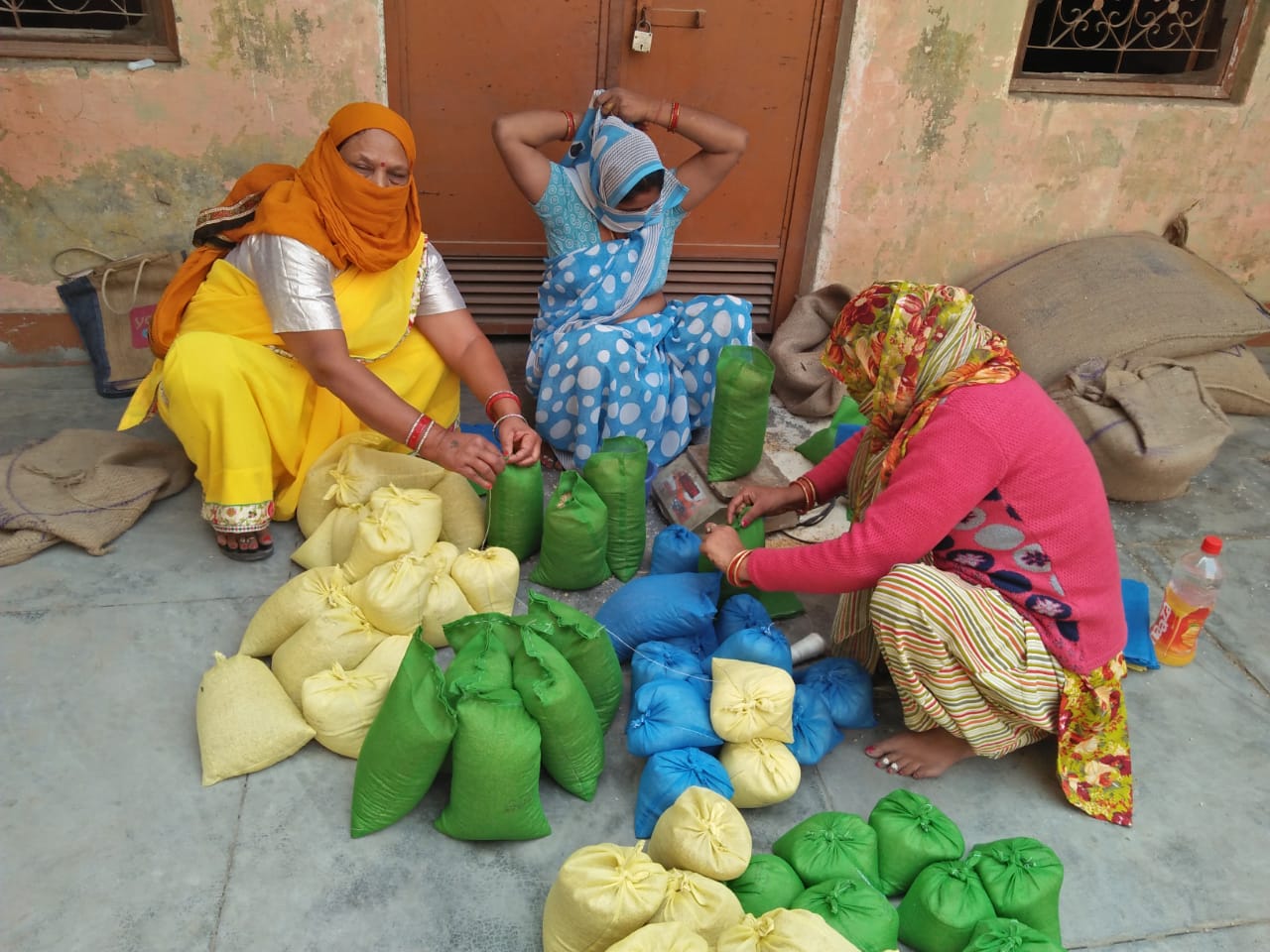 Explaining other initiatives these self-help group women are undertaking to tackle the problem of malnutrition in the state, Mr Kumar said that in their recent past surveys it has been highlighted that each Anganwadi in Uttar Pradesh has at least two severely wasted children. He said,

To tackle this issue, we have asked all self-help women group to keep a track of such children and give them double the ration supply, sometimes also give them extra nutritious food as per the government standards so that they can reach the healthy weight. Apart from the ration, we have guided the groups to take special care of such homes via daily visits, keeping a track of their weight and educating their families about following a good nutritious diet, sometimes we also provide them with supplements, if needed.

Along with these services, in Uttar Pradesh, the self-help women group are also responsible for educating families in their block about breastfeeding practices, initiating breastfeeding within one hour of the childbirth, exclusive diet for the new-borns and motivating the women of the house to grow their own vegetables in their backyard through poshan-vattikas or nutri-kitchens.

Over 1,100 Mock Vaccines Administered For COVID-19 In Second Dry Run In Noida

NFHS 5 Report Highlights: Malnutrition In Children Has Worsened In Key States Of India, Experts Say We Need To Rethink Our Nutrition Plan