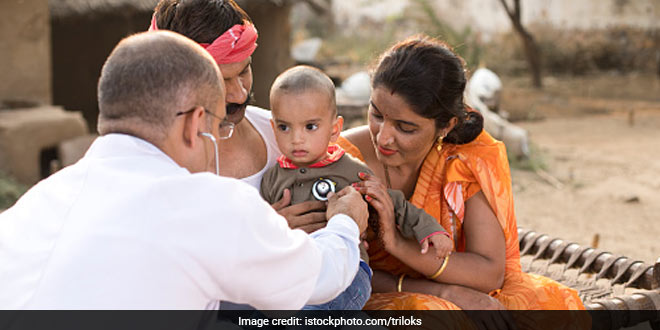 New Delhi: One of the startling revelations in the first-phase data of the National Family Health Survey (NFHS) 5 for the year 2019-20 released by the Union Ministry of Health and Family Welfare recently shows that several states in India have either witnessed meagre improvements or sustained reversals on child (under 5 years of age) malnutrition parameters such as child stunting; child wasting; share of children underweight and child mortality rate.

According to the report, 16 states recorded an increase in underweight and severely wasted under 5 children among 22 states that were surveyed during the first phase of the NFHS report. Similarly, 13 states and UTs of the 22 surveyed registered a surge in the percentage of stunted children under five years of age in comparison to NFHS 4 (2015-16).

Child wasting reflects acute undernutrition and refers to children having low weight for their height. Instead of bringing it down, several states such as Telangana, Kerala, Bihar, and Assam as well as the UT of J&K have witnessed an increase. Others like Maharashtra and West Bengal have been stagnant on this front.

Whereas, when it comes to the proportion of underweight children, again, several big states, Gujarat, Maharashtra, West Bengal, Telangana, Assam and Kerala, have seen an increase. What’s worse is the fact that reversal in the downward trend has happened in child stunting as well, which reflects chronic undernutrition, and refers to the percentage of children who have low height for their age. Stunting, more than any other factor, is likely to have long-lasting adverse effects on the cognitive and physical development of a child. States like Telangana, Gujarat, Kerala, Maharashtra, and West Bengal — all saw increased levels of child stunting.

The present NFHS was conducted among 6.1 lakh sample households, involving household level interviews to collect information on population, health, family planning and nutrition related indicators. The results of 17 States and 5 UTs have been released now as Phase-I.

Talking about areas where India has failed in last 10 years when it comes to protecting our most vulnerable people, Jean Dreze, Social Scientist, added,

In many major states of India, we haven’t seen any improvement when it comes to the malnutrition parameters for over four years. In fact, in six of the 10 major states of India, the incidence of stunting among children have increased and in seven out of 10 major states the incidence of underweight has increased. These are really catastrophic figures, it is quite a bombshell. And all this should be a cause of worry for all of us, in fact no other country in the world has the highest proportion of underweight children than India and that’s why I feel really there is a reason for an alarm here.

Highlighting the reasons behind these grim figures, Mr Dreze said,

We have seen a stagnant growth in India. In 2017-18, the figures of poverty were very worrying from the National Sample Survey and these are some of the indicators that tell us that things are not going well. One of the major reasons behind such trends in malnutrition area for the country is economic slowdown, secondly, the central government in India has turned its back on social policies and in particular on children. I think, in India, children have never become that much of the priority as it is and all these trends that are coming shows exactly that.

Reiterating the fact of importance given to children via social policies is less in India, Mr Dreze added,

Take for example the mid-day meal schemes. The budget given to this programme this year is only 11,000 crores as compared to 13,000 crores in 2014. Why it has decreased, knowing the fact that we need to make progress in nutrition. We need eggs in mid-day meals and schools for fixing the nutrition game, some states have already started doing it but to see the malnutrition numbers go down, we need to have it across the country. There is nothing better than egg for growing children and these are the little things we can do at lower expense. But yet we are not doing it.

He also added that India’s malnutrition and nutrition numbers doesn’t tell us a complete picture as there is no data available for children above the age of 5-years old. Mr Dreze added,

NFHS 5 data tell us the statistics of children for children under the age of 5 years. We don’t have anything for children above that age group, who are receiving mid-day meals – there are a lot many children who are wasted, stunted or are undernourished in the age group above 5-years of age. And that’s what the government should be doing, we need a lot more collection of social statistics to see how programmes like mid-day meals, Integrated child development services are doing on ground and then figure out solutions.

Dr Suneela Garg, Director Professor, Department of Community Medicine, Maulana Azad Medical College and Advisor, Indian Council Of Medical Research said, “Though in NFHS 5 we have reduced infant mortality and increased immunization coverage but child undernutrition in form of stunting has worsenef, even for richer states such as Kerala, Maharashtra and Goa. And that’s is a worrying trend.”

Further highlighting the reasons, she said,

“There are many reasons that are leading to reversing of 7the gains attained earlier. These can be:

Dr Suneela Garg also added that the data shows that young women in 9 of 22 states are facing sexual violence as children, which can lead to early pregnancies and whole lot of complications overall. She said,

However, the most important overarching factor is economic slowdown in our country. We need to look at ICDS functioning and its evaluation. And a well-functioning of ICDS scheme without economic growth is not going to improve the nutritional status.

Talking about the remedial measures, she added,

What is urgently required is large sample surveys evaluating ICDS (Integrated Child Development Services), Village health and nutrition days (VHND). We also need to see that measurements are taken accurately by the trained person with the functional equipment. We need to see that practical monitoring of VHND days and ICDS scheme in terms of real work done is being done across the country, we need to monitor records and see what are the gains and losses that have occurred for a particular period in the areas. We need to regularize and monitor the food supply under supplementary nutrition programs. Poshan Abhiyan components should be implemented in true spirits like Inter-sectoral convergence for better service delivery, use of technology (ICT) for real time growth monitoring and tracking of women and children, intensified health and nutrition services for the first 1000 days. I think, India needs a Jan Andolan through strong community involvement and stakeholders.

Malnutrition is a multi-dimensional problem, but ‘availability and access to food’ is at the heart of the issue. The declining GDP impacts the food bowls of the most vulnerable. While we see an improvement in health services and also a decline in Infant mortality rate, which can be given direct impetus by investments, the issue of poverty is complex. Even though we should see the granular data to get to the factors which might have led to this, we need policies which can give money in the hands of the underprivileged.

He also said that broadly NFHS 5 report IS A reflection of the country’s economic condition. He said,

As the economy moved into a bad shape, it impacted children’s nutrition status across the country. And the COVID pandemic must have worsened all this more. ‘How much’, we will come to know in the next few years when survey results of this year will come out. The internal migration, the lost jobs, reduced incomes, diversion of health functionaries to covid related duties all had potential to hit the children’s nutrition status.

Highlighting what changes are needed in India at policy level to tackle the issue of malnutrition, Dr Maroof said,

Our country needs a 360-degree shift in its nutrition action plan. Apart from schemes and policies, we need to work on ground ensuring that everyone gets easy access to the benefits and nutrition and thereby tackling the malnutrition crisis. The warriors or anganwadi workers working on ground to tackle this problem are themselves malnourished. In fact, our farmers, workforce engaged in industries who are pivotal to transform nutrition landscape are themselves malnourished. We need to invest on our workforce, specifically women and children so that they are empowered to address malnutrition in a much dignified way.