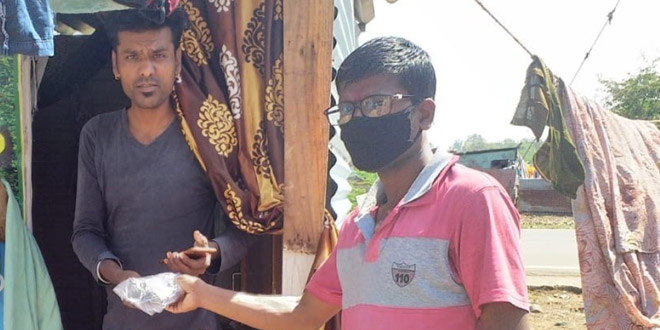 New Delhi: 45-year-old Ganesh Nagle is well known in the 100 Quarter slum of ward 63, Bhopal. Born in the Betul district of Madhya Pradesh, Ganesh has only studied till the seventh standard, but his inclination towards social work set him on a different course. Ganesh says that he came to Bhopal in 1995, searching for better livelihood opportunities and settled down in the 100 Quarter slum after he got a job as a factory worker. At his factory, he convinced a group of his fellow workers to contribute a small portion of their salary and help children of poor families by providing essential food items. In 2019, when WaterAid India and its partner, Aarambh, initiated the formation of a slum-level committee, locally called Mohalla Samiti, Ganesh voluntarily joined it to represent the issues of his neighbourhood.

Various training programmes, orientations, and exposure provided by the WaterAid India– Aarambh initiative built his capacities and he emerged as a community leader. He became the secretary of the committee and started working actively towards social causes, especially ensuring WASH access to all households in the slum, a spokesperson from WaterAid India told NDTV.

Ganesh was an active proponent of the scheme to construct household toilets under the Swachh Bharat Mission. He prepared a list of families that were left out of the scheme and shared it with the local ward parishad and Member of Parliament, the spokesperson added.

It was through his efforts that 25 marginalised families who had been left out earlier got access to household toilets. He also motivated people to use toilets properly and is trying to make the slum open defecation free. He continues to try for construction of toilets in the households that are still left out, she said.

Ganesh also presented a demand letter to the municipal commissioner, zonal water-in-charge, and ward parishad for household tap connections. He motivated 40 households to pay their holding tax as a prerequisite for initiation of water supply. His efforts were successful, and in 2020, water supply at the household level under the Narmada Jal Yojana was initiated in the slum.

When a water point in the slum became dysfunctional, causing to increased hardship for the slum dwellers, Ganesh shared the issue with our organisation and sought support. He also led a group of people to visit the ward councillor and Member of Parliament to advocate the issue. This water point was owned by Bharat Heavy Electricals Limited (BHEL). It was due to his effort that the BHEL administration handed over the ownership of the source to the community. He also mobilised his community to contribute their share. With support from the project, the water source was renovated and a community-managed decentralised water supply distribution system was established. People are now getting adequate water for their needs. Following the success of this intervention, two other water sources of the slum were renovated, resulting in better access to water, the spokesperson told NDTV.

Also Read: From WASH To COVID-19 And Menstrual Hygiene, Bhopal’s Alomati Ray Is A True Warrior Of Change

Ganesh is also concerned about the cleanliness of the slum. Every Sunday morning, he dedicates two hours to cleaning different areas of the slum. Inspired by his efforts, the youth of the slum have now started helping him.

The present outbreak of COVID-19 has affected the whole world; Bhopal and the 100 Quarter slum are no exception. In this situation too, Ganesh masked up and set out to face the challenge and save the lives of his fellow dwellers.

He encouraged people to maintain social distancing at public places like water points, community toilets, grocery shops, among others. For this purpose, he drew circles at all the community points and motivated people to maintain the correct distance. He also works tirelessly with the us, spreading awareness about prevention of the coronavirus infection, the spokesperson explained.

Moreover, along with other members of the mohalla committee, Ganesh identified 12 ‘most vulnerable’ families like women-headed families, senior citizens, and persons with disabilities in the slum shared their details with the Bhopal Municipal Corporation (BMC) and other organisations and ensured that all necessary supplies reached them. He also mobilised the BMC and ensured regular sanitisation of the slum.

When it comes to his efforts at his workplace, he inspired his fellow employees to donate money. With the Rs 5,000 he collected, he distributed food items to people with disabilities. He also provided support to anganwadi workers in conducting a survey to identify suspected COVID-19 patients.

People like Ganesh Nagle demonstrate that sustainable development of any community is ensured if there are leaders like him, the Wateraid spokesperson signed off.

World Toilet Day 2020: All You Need To Know About The Theme And Significance