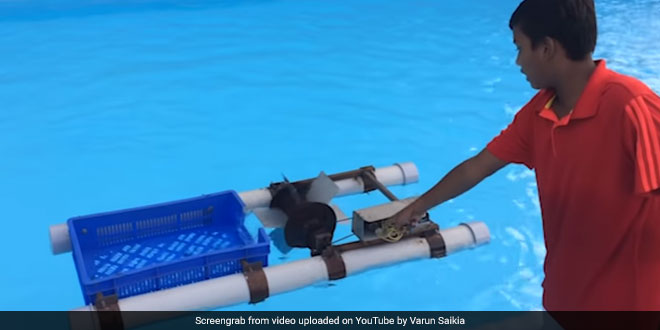 Mumbai: In a fruitless rescue operation, a pilot whale died earlier this year in Thailand after swallowing more than 80 plastic bags that weighed up to eight kilos. Disturbed by this dreadful news, a 12-year-old boy from Gujarat’s Vadodra city decided to find a solution to the ever-growing plastic menace and in turn protecting the marine life from choking on the toxic material. Varun Saikia, studies in the eighth grade and has developed a cost-effective machine that can remove litter, especially plastic items from different water bodies like lakes, seas and rivers.

After reading about the tragic news of pilot whale, Varun started his research on how plastic waste is gradually degrading the water bodies, environment and endangering the lives of species living on land and in water. He came across various instances where fishes have died or are becoming extinct from all parts of the world due to reckless dumping of plastic waste. While he was aware that it would be impossible to end people’s dumping habits overnight, he decided to opt for a route that would reduce the plastic from water bodies.

People need to understand the importance of waste segregation as keeping the dry waste separately is the first step to prevent plastic pollution. Bringing change at the source level may take months or even years in a country like India which has just begun to understand the concept of waste management. The second stage is to clear small water bodies of plastic so that it doesn’t carry forward the litter when it merges with larger rivers or oceans. Here’s where my machine can be helpful. The machine is designed in such a way that it can remove all kinds of harmful elements in one go, says Varun, a student of Navrachana School in Vadodara. 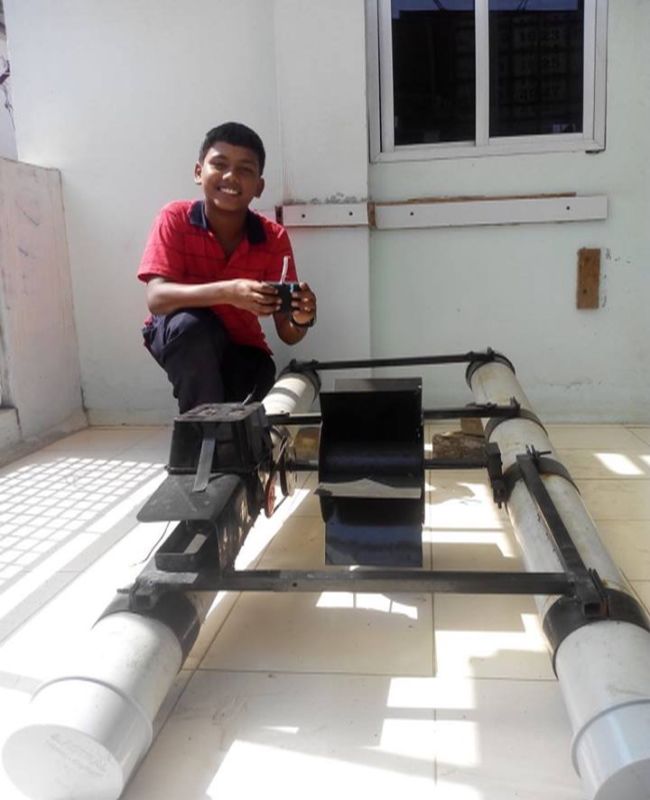 Invention Of The New Device

Before developing the device, Varun made several models and finally came up with a miniature version of the model by reusing plastic items like spoons, bottles and bucket and cardboard paper. He used two drinking bottles as the main body and attached the spoons as the wings of the body. He then placed a battery on the bottle and finally attached the cardboard box at the end of the two bottles. He tested the device in a baby pool and got a positive result. 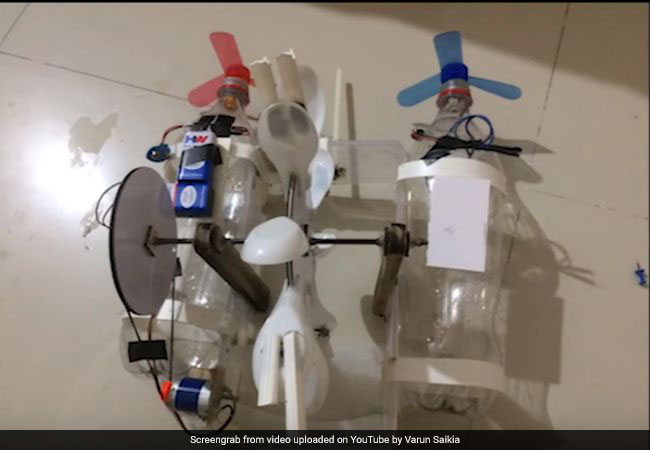 With the help of his teachers and parents he then started to make the device. The innovative device, named as Makara, is fully battery-operated machine that aims to reduce manual cleaning and focuses more on time management and effective cleaning. The machine, that costs Rs 12,000, consists of a paddle wheel operated by a motor and a pulley and can be controlled using a remote. The paddle wheel pushes the vessel ahead as it navigates through the floating garbage. The force of the wheel pushes the garbage inside the net tail bin which is attached to a basket. Once the basket is full, it can be detached to unload the garbage collected. 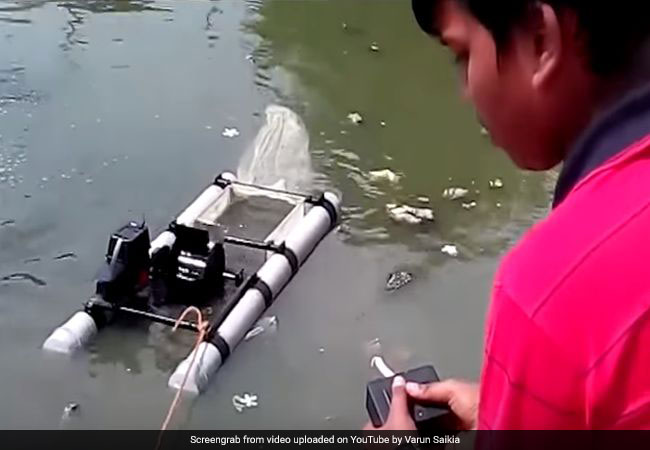 The innovative device, named as Makara, is a fully battery-operated machine

Also Read: A Mumbai-Based Organisation Introduces Board Games On Waste Management For Children

Elaborating on the concept of Makara, he says,

The pond cleaner is designed to clean all waterbodies from harmful floating plastic waste. It has a net bin which is long and is like a tail of a crocodile, it can collect plastic bottles, floating plastic waste and even other floating waste from dirty ponds. It is remote controlled and easily workable. It can also be useful to clean swimming pools. It can be customised to increase its capacity by using a heavy-duty motor and adjusting pulley.

The machine has a capacity to collect up to three kilos of floating waste in one go. It can collect items like plastic cups and bottles, polythenes and dead insects. Unlike other devices, which require electricity and need to be connected or installed around the water bodies, Makara can be placed anywhere as it is battery operated.

Once the machine was ready in October, Varun successfully tested it in a friend’s swimming pool. Comparing the Makara with a conventional vacuum cleaner, a caretaker of the pool says,

A vacuum cleaner needs to be taken to all corners of the pool and takes a lot of time to clean the entire pool. In comparison to that, the Makara can be operated sitting in one place with the help of the remote. It is also faster, and the cleanup process is more effective.

After testing it in a pool, Varun took the machine to the Gotri pond in the city to clean a patch of it. With the help of the municipal staff, he tested the machine. Garbage including floral waste, coconuts and plastic items were removed from the pond. 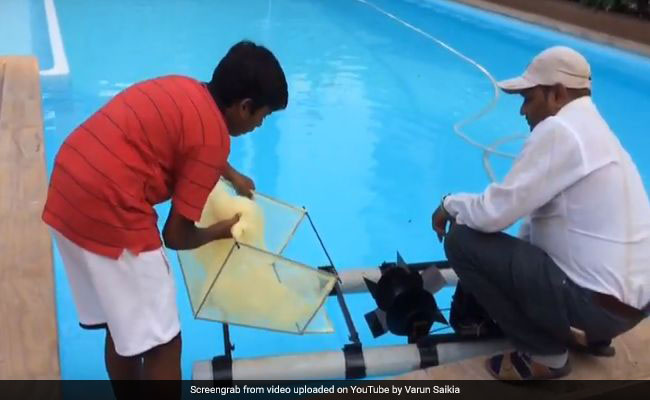 Varun, has so far, tested two types of water bodies and aims to develop the machine on a larger scale to use them in rivers and oceans.

I am working towards developing the model on large scale with proper funding and investments. This machine has the potential to clean huge lakes, rivers and oceans. I also aim to make the device energy efficient by generating hydroelectricity from it in future, adds Varun.

Lives of many manual scavengers are at stake when they manually clean the drainage systems. They often inhale the toxic gases that lead to prolonged diseases and respiratory problems. By using the machine many lives can be saved, he says.

Health of people living around lakes and ponds will automatically improve once the all pollutants are removed from the water bodies. 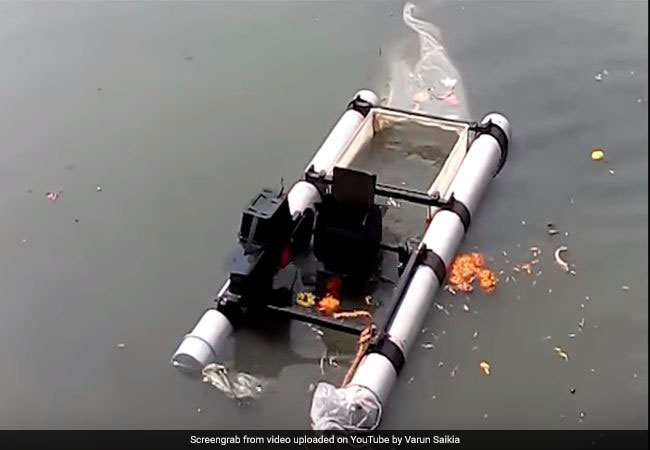 Gotri talav (pond) smells awful and whenever my children play near the pond they fall ill. Keeping the pond clean is important for my and my children’s health. I saw how the Makara machine easily cleans the pond when Varun was testing it, says a Kaanta, a mother of two who resides close to the pond.