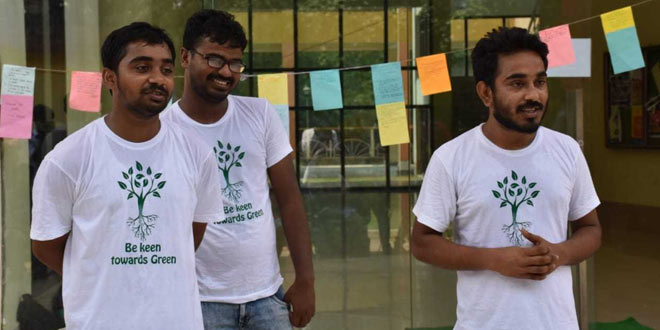 New Delhi: A group of 30 students, of Indian Institute of Technology-Kharagpur (IIT-KGP) is on a mission to reduce usage of single-use plastic within the campus. The group named ‘Vision Prabaho’ which was started by four PhD scholars in June now has a core team of 30 students and 500 students as active members. The group will be soon given a formal structure as a society registered under the Technical Students Gymkhana- the students’ activities centre that coordinates all extra-curricular events inside the campus.

Also Read: This Durga Puja Pandal In Bengal Has A “Green Message” For Visitors

The founding members are all pursuing PhD – Biswarup Mondal (Chemical Engineering Department), Pragnaditya Malakar (Geology and Geophysics Department), Sirsendu Sekhar Barman (Mathematics Department), Sudeshna Kumar (Architecture and Regional Planning Department). It all started on April 12, 2018 when an environmental activist Tarak Chandra Paul, who was on a year-long tour across India spreading the message of preserving the environment, visited IIT-KGP campus. He was a chief guest at the ‘pedal and plant’ cycle rally, an initiative of IIT-KGP to encourage the campus community to plant trees and to use cycle for commuting whenever possible.

“We were stunned after knowing how much efforts Mr. Paul was putting in, with so much passion, just to sensitise people all over India about how much harm plastic pollution is doing to the environment”, said Biswarup Mondal. He added,

After the event, we four friends decided that we have to do something to reduce plastic from our lives and our campus at least and since we have the scientific understanding about various aspects of pollution, we will be able to communicate the threats posed by plastic pollution and will be able to find innovative solutions too.

Talking about the reason behind choosing ‘Vision Prabaho’ as the name of the group, Pragnaditya Malakar, one of the founding members said, “‘Prabaho’ is a Bangla term which means ‘flow’ in English. Our vision is to tackle environmental issues and work towards creating awareness in collecting and disposing of plastic waste, including e-waste and rectify the mistakes of the past so that in future we are able to achieve a natural flow of the environment around us be it our waters or our air”. On June 5th- the World Environment Day, with the slogan “Be Keen Towards Green”, the group marked its formal beginning with activities like the ‘pedal and plant’ cycle rally around the campus, street play, discussions and photography competition. 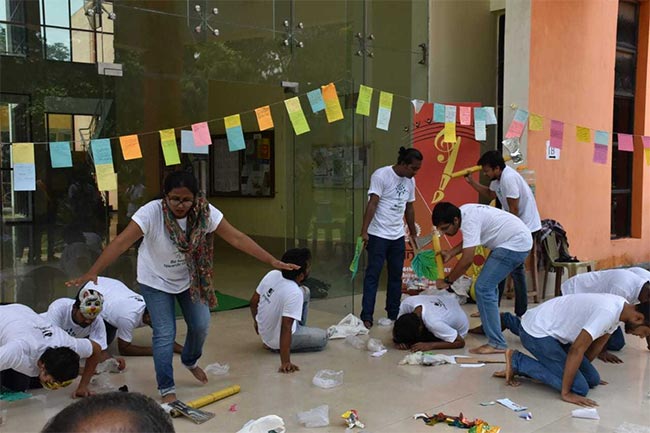 The founding members claim that they, along with the core team members, have not used any single-use plastic item for over four months and are now inspiring other students to follow their example. In the last four months, more than 500 students have taken up the cause and have been registered as members of the group. They will be working extensively towards creating social awareness on environmental issues and will be undertaking projects to come up with innovative ways of organic, inorganic and electronic waste disposal. Biswarup Mondal said,

“We need to go a long way and this is just the starting. IIT-KGP has a huge campus; we have 23 halls, faculty quarters, staff quarters, three schools, markets and many eateries right outside the campus and we are working to take the campaign to each and every one. We have not used polythene since last four months and we are happy to see that more than 500 students have shown interest in the capmgain ‘Vision Prabaho’.”

Vishal Kumar Singh, fourth-year undergraduate student, Department of Mining Engineering who is also the Vice-President of Technical Students Gymkhana said that since the inception of the group, it has been organising various awareness programmes and has started a discourse around the campus on the issues of environmental degradation. He said,

The Prime Minister of India has been making extensive efforts to eliminate all single-use plastic in the country by 2022. We are so proud of our PhD scholars who have taken up the initiative in the campus. This is just a beginning though as we have a huge campus and so we want it to go a long way. We are now in the process of giving a formal structure to ‘Vision Prabaho’ so that there are no logistical and functional issues.

The group members share that the campaign is receiving support and appreciation from everyone around the campus, the administration, faculty, non-teaching staff, students, shopkeepers and the families living inside the campus. Mrs Barnali Chakrabarti, the wife of the Institute Director, Professor Partha Pratim Chakrabarti, too has been a support and guide for the group and has always marked her presence in all the awareness programmes conducted by ‘Vision Prabaho’. “We are also in discussion with principals of three schools, Kendra Vidyalaya, DAV Model School and Hijli School, in our campus to collaborate with them and include school kids in our campaign”, the founding members informed.

Considering the fact that our campus is a mini-township and is witnessing challenges quite similar to urban areas though, at a smaller scale, it is heartening to see students taking actions on curbing plastic usage in the campus. The impact is quite visible too. The waste is being segregated but we still need to come up with innovative ideas about disposing and reusing the waste.

As a result of the group’s efforts, three halls of IIT-KGP have completely stopped using single-use plastic items and at the shops and canteens, the students have stopped asking for any straws or plastic cups/ bottles/ polythene bags and have started carrying their own glass/metal bottles/cups and jute/cotton bags. The students believe that if they won’t take the single-use items from the shopkeepers, they will eventually stop keeping them in their shops. The soon-to-be-formalized society ‘Vision Prabaho’ is going to take care of all the environment-related issues in the campus. 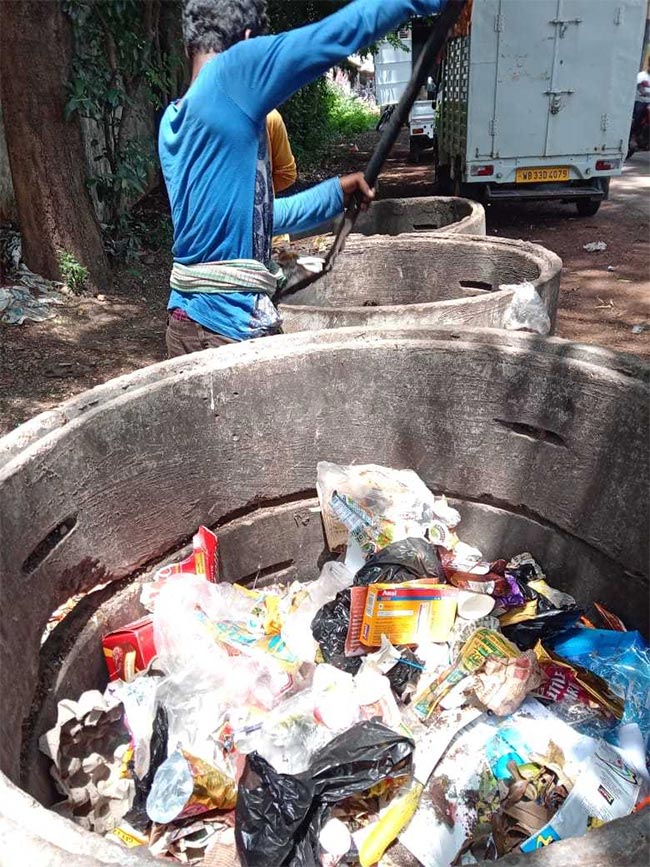 Students are also conducting a survey on how much plastic waste is being generated. According to the founding members, ‘technology market’ has been identified as the biggest source of plastic in the campus. The students also found that each hostel mess produces about 100kgs of bio-degradable waste per day which mainly include vegetables peels and leftover food. The group has started managing waste at the point of production by segregating biodegradable and non-biodegradable waste. “We have already started installing mini- composting plants for managing waste from kitchens and hostel mess. We produce manure from it which is then used by the horticulture department. We are now working on finding technological solutions for managing and disposing of the non-biodegradable and electronic wastes”, informs Pragnaditya Malakar, a founding member.

Our PhD Scholars have sown the seed of this society that is on the mission of sensitising more than 20 thousands members of our campus community. Now by making it into a formal body under Gymkhana, we hope to see it mature and grow strong with a large number of members and together we bring about a positive change that we want to see on our campus.