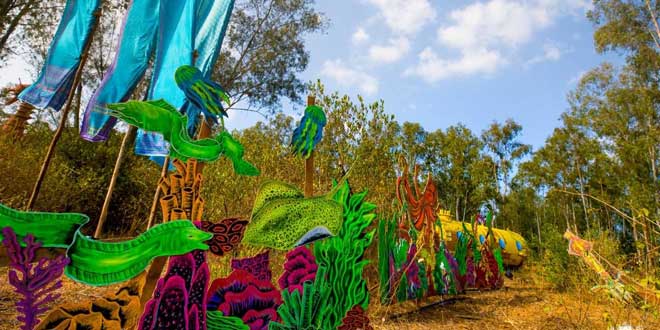 Mumbai: Music festivals are one of the most popular ways to connect with the youth. Walk through any major festival and you will find established musicians, big stages, a hip-hop culture and an array of gourmet food and drink vendors. The recently organised ‘Echoes of Earth’ music festival in Bengaluru, was no different except that it had an eco-friendly twist. The festival, which is India’s only ‘green’ music festival, showcased the plight of marine pollution by fashioning the concepts of ‘reduce, reuse and recycle’ into art installations.

The two-day (December 1-2) festival was held at the Embassy International Riding School in Bengaluru, which is nestled in 150 acres of green cover. Around 1,500 people and more than 40 International and Indian artists attended the festival that was centered around the theme, ‘Wonders Of The Deep’.

Shedding light on the motive behind giving an eco-friendly touch to one of the biggest music festivals in India, Roshan Netalkar, Founder and Curator of Echoes of Earth says,

The idea was to do a music festival which was a showcase of great music from around the world to the Indian audience which is evolving in its music taste. We simultaneously wanted to use the festival as a platform to stand for something more. Living in Bengaluru we are exposed to the rapid erosion of natural resource right in front of our eyes. It is the need of the hour to wake up and start creating a responsible ecosystem. This thought became the driving force behind the festival and hence ‘Echoes of Earth’ emerged.

From having upcycled infrastructure like the chairs and bins, food stalls with bio-degradable cutlery, recycled art installations to having stages created from recycled waste materials, the festival displayed the spirit of conserving the earth in various forms. To make the stages, scrap materials like metals, wires, cloths, wood were used. Around 12 tonnes of waste was used for all installations and stages.

The organisers collaborated with multiple organisations and enterprises working to repurpose waste. For instance, they collaborated with ReefWatch Marine Conservation, an organisation towards marine conservation, to create awareness about marine life and plastic pollution. Along with designing the art installations, ReefWatch also conducted workshops for adults and children at the festival.

We didn’t want to have only decorations and installations and so to make the whole festival informative we helped them with facts and figures of marine life. We also exhibited photos of human activities affect the underwater species to showcase their plight, Nayantara Jain, Executive Director, ReefWatch, tells NDTV.

Artists Dibyush Jena and Sibani Biswal from Bhubaneswar made ten installations from discarded metal and cloth. While Dibyush’s art depicted a whale and spoke of the ecological imbalance that human actions are causing in the oceans, Sibani’s art, called ‘Gates Of Linphea’, used Pattachitra, a traditional art form from Odisha, to depict a message to humans to take care of the planet.

This is not the first time ‘Echoes of Earth’ has promoted sustainable environment through its music festival. For the last two editions, the organisation planted one sapling for each ticket sold by partnering with different NGOs.

Also Read: Ever Heard Of Jewellery Made From Seeds? This Duo From Nashik Gives An Eco-Friendly Spin To Accessories

Have You Seen The Viral Picture Of ‘Roof-With-A Jeep’ From Ladakh? 3 Idiots Inspiration Sonam Wangchuk Reveals The Story

5,000 Compressed Bio Gas Plants Will Be Set Up By 2023: Dharmendra Pradhan