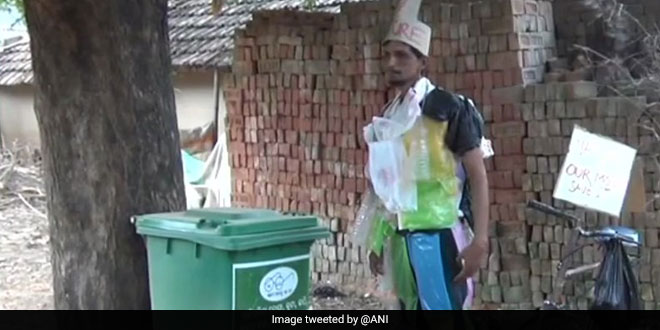 Mumbai: Residents in Mayurbhanj district of Odisha were in for a surprise on December 1 when one of their fellow residents wrapped different kinds of plastic waste all over his body and took on the role of ‘chalta-phirta’ (walking talking) dustbin. While children found 36-year-old Bishnu Bhagat’ bizarre avatar fascinating, adults were curious to know about the intention behind it. Bishnu dressed himself in polythene bags and plastic bottles to give out an important message about plastic pollution to his fellow residents.

With ‘Save Future’, ‘Don’t use polythene bags’ written on his dress, he doesn’t mind being referred to as the walking dustbin, because the underlying message he wants to convey is, “If I look ugly to you, think about the earth and what we have made it.”

A few days ago, when Bishnu was walking home, someone threw a plastic bag with full of garbage that landed on his head. He took the bag and threw it in the nearest public bin. While he was throwing the bag in the bin, he noticed plastic bags lying unattended in and around the bin. A few metres away from the bin, he saw a cow chewing on the plastic bags and a couple of days later he got to know that the cow died after eating polythene bags. Disturbed by the incidence, Bishnu decided to tell people about the problem of plastic waste in a unique way.

I want to give a message to people to not use plastic bags as they are dangerous and harmful to the society, country and the world. We are so busy in our daily lives that we do not realise the harmful effects of plastic. I also realised it after I came across an incident of a cow dying due to eating plastic bags. When I asked the cattle herder about the problem, he said it is very common and cows across the country face a similar fate, Bishnu told ANI.

Mayurbhanj: Bishnu Bhagat, a resident of Baripada dresses himself up in polythene bags to create awareness among children about pollution caused by polythene. He says,"I dress up this way to spread the message that polythene is bad and shouldn't be used." #Odisha pic.twitter.com/TvHVREUomQ

Bishnu is now a mission to spread awareness among people about his personal experience across the district, starting with children.

Children are the future of this country and for a plastic-free future, it is necessary to inform children about the plastic menace. If we tell them now and help them live a life without plastic items especially polythenes, only then we can ensure a future that is safe for the environment, animals and people. Besides, parents tend to listen to children and they might also give up on plastic, he says.

Bishnu is already gaining popularity within the residents and he has already visited a few government schools in the district.

Aloka Dutta, the principal of a school in Mayurbhanj, said that the moment Mr Bhagat entered the school, there was a lot of buzz among the students. They knew he would talk about something related to polythene.

I appreciate Mr Bhagat’s unique idea of dressing himself up with polythene bags to draw attention. This way, he had children’s interest and they learnt important life lesson from him, Ms Dutta said.

One of the school students, Sanjana, said, “From Mr Bhagat I learnt that I should not use polythene bags and also encourage my friends and family members to stop its use.”

Appreciating Bishnu’s efforts to lead a movement against plastic waste, Mayurbhanj’s Collector Vineet Bharadwaj said that his personal movement can culminate into a mass movement in the district and everyone can collectively work towards a better future.

Appealing people to shun plastic bags, Bishnu also talks about the alternatives that one can opt for.

Make it habit to carry cloth bags whenever you are out for shopping and if the shopkeeper packs your product in a plastic bag, simply refuse it. These basic steps can bring a huge change in the future, he adds.

Also Read: Plastic Waste Is Not A Problem In Meghalaya District, In Fact It Is A Solution For Building Toilets

With inputs from ANI

Plastic Waste Is Not A Problem In Meghalaya District, In Fact It Is A Solution For Building Toilets