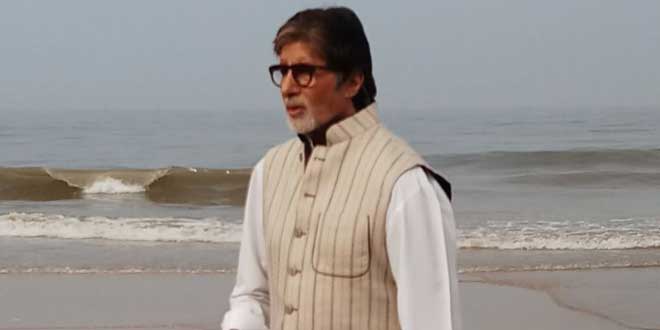 New Delhi: “Alarm! It is estimated that India is responsible for 60% of the rubbish in the world’s oceans,” Amitabh Bachchan shares this on his twitter in a bid to make citizens aware why they need to stop using plastic products. According to a 2014 World Health Organisation report, there are more than 5 trillion pieces of plastic floating in the world’s oceans. India, generates around 56 lakh tonnes of plastic waste annually and is labelled as one of the top polluters of oceans in the world.

Watch: We Must Get Together To Make India Cleaner: Amitabh Bachchan

T 2582 – ALARM !!!
It's estimated that India is responsible for 60% of the rubbish in the world's oceans. pic.twitter.com/cwUTJxGPVu

This is not the first time, Big B has come out and voiced about India’s growing plastic pollution, during the NDTV-Banega Swachh India Cleanathon which marked the Rashtriya Swachhta Diwas on October 2, Mr Bachchan urged citizens of India to make wise choices and stop using  plastic immediately, he added, today, from Kanyakumari to Kashmir, there is not even one inch place where humans have not gone. But, the irony is that, with us plastic, air and garbage pollution has also reached to different places. We use plastic only for few hours or days, and, then we end up throwing it, just that plastic takes 1000 of years to degrade itself completely. Today, that plastic is causing huge environmental problems – it is killing our earth, rivers, marine life, mountains and forest. In short it is killing our precious environment that we have got in heritage.

Last month, the 75-year-old actor also got personally involved in the Versova cleanup drive with Afroz Shah, in a bid to raise awareness on how plastic is choking the planet. The actor also showed his support towards the cause by gifting the beach warrior 2 machines that will further fasten the cleanup process at the beach.

Week 100 cleanup.@SrBachchan gifts 2 mean machine by @escortsgroup to clean the oceans.Thank you sir. You are angel to us and marine species pic.twitter.com/gs8BOYmJpz

Speaking in numbers, about how plastic is killing the environment, it is estimated that around 100,000 marine creatures die every year from plastic entanglement and approximately 1 million sea birds die from eating plastic. The experts have also predicted that by 2050 more than 13 billion tonnes of plastic waste will end up in the environment or landfills, if the current trend continues to stay.

The need of the hour in India is strict laws on plastic ban, just like France, Rwanda, Sweden and Kenya (which has imposed world’s toughest law – imprisonment of up to four years or fines of Rs. 25 lakh for purchasing, selling or using plastic bags). Currently, there is no central law for the same.

It may take time for our laws to get in place, but, we as citizens need to get our act together and start making conscious choices alternatives to plastic.

In Pictures: Plastic Waste Crisis: What India Can Learn From Other Countries Around The World