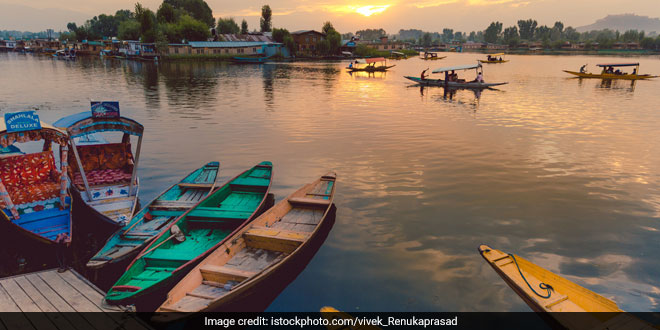 Srinagar: Concerned over the degradation of the Dal lake which was once known as the lungs of Srinagar city, Jammu and Kashmir Governor N.N.Vohra on Thursday decided to engage professionals to revive the waterbody. Official figures indicate that the Dal has shrunken to less than half its original size with its capacity down by 40 per cent. Governor Vohra has invited the navy and other experts to tackle the issues faced by the waterbody.

The Governor has already spoken to Navy Chief Admiral Sunil Lanba, during his visit to the state last month, for his help in identifying experts who could undertake a benchmark survey of the Dal and later, also of the Wular lake.

“Governor Vohra has asked his adviser B.B. Vyas to get in touch with Chairman-cum-Managing Director (CMD) of the Dredging Corporation of India (DCI) Rajesh Tripathi.

“The Navy Chief had said Vice-Admiral S.K. Jha (Retired), former chief hydrographer, could assist the state government in formulating an approach to deal with the problems faced by the Dal.

“At the request of the state government, Vice-Admiral Jha (Retired) and Tripathi visited Srinagar and undertook separate surveys and assessments to identify the problems,” officials said.

The Governor chaired a meeting at the Raj Bhavan on Thursday where Jha and Tripathi presented their assessments.

The assessment made by the CMD of DCI revealed that the size of Dal has shrunk from its original area of 22 sq km to about 10 sq km.

Water quality of the lake has deteriorated due to intense pollution caused by untreated sewage and solid wastes that flow into the lake, encroachments of water channels and clogging has diminished the circulation and inflows into the lake, leading to extensive weed growth of water hyacinth which has emerged as a health hazard.

It was also learnt that due to siltation, encroachment etc, the depth of the lake has reduced at many places and its total capacity has gone down to 40 per cent, the continuing night soil discharge from the 800-900 house boats is causing extreme pollution, officials said.

After discussions it was decided that the Navy chief would be asked for help in a comprehensive bathymetric survey of the Dal-Nigeen lake to establish a benchmark database to decide the extent of dredging, etc. to be carried out at various parts of the lake, the officials further added.

“The Governor would be personally reviewing progress on the basis of the chief secretary’s reports in regard to this very important project,” officials said.

Swachh Bharat Mission (Gramin) Would Result In Averting More Than 3 Lakh Deaths By October 2019, Says WHO