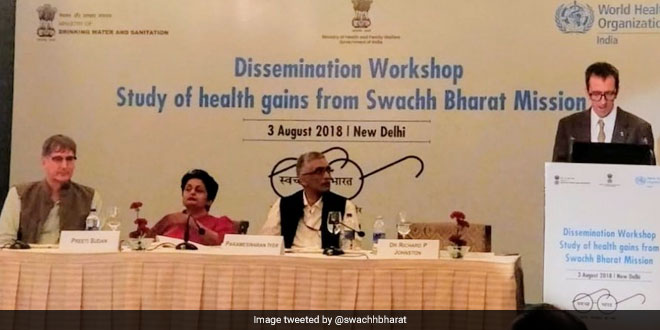 New Delhi: The Swachh Bharat Mission (Gramin) would result in averting more than 3 lakh deaths between 2014 and October 2019, said a WHO study of health gains from the government’s flagship programme. It was conducted by the World Health Organisation (WHO) on request of Ministry of Drinking Water and Sanitation (MDWS) to assess the health gains of the SBM- G.

The study, which was released at the ‘Dissemination Workshop’ here, found evidence of improvement in drinking water supply, sanitation services and personal hygiene which had positive health impacts. “It is estimated that SBM-G will result in averting more than 3 lakh deaths (diarrhoea and protein-energy malnutrition) between 2014 and October 2019,” WHO expert Richard Johnston said.

“Unsafe sanitation caused an estimated 199 million cases of diarrhoea annually before the start of the SBM in 2014. These have been gradually reducing and will almost be eliminated when universal use of safe sanitation facilities is achieved by October 2019,” he said.

Dr Richard P Johnston, technical officer for water, sanitation and hygiene at @WHO, presented key findings and discussed the methodology used for the study performed by @WHO. #SBM pic.twitter.com/4hNfPQgXNk

More than 14 million Diability-Adjusted Life Years (DALYs) were estimated to be avoided between 2014 and October 2019, the study said. “This study which WHO has done for us shows that over the course of this programme, by the time it is concluded by October 2019, over 3 lakh lives would have been saved. In addition, there have been several other significant health benefits,” MDWS secretary Parameswaran Iyer said at the report’s release.

“This is an important study which shows that SBM goes well beyond changing the behaviour of rural Indians and making it a ‘Jan Andolan’, having significant health impact and economic impact as well.