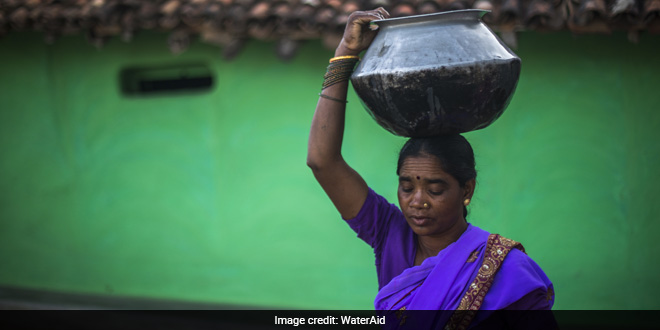 New Delhi: ‘Water, water everywhere, not any drop to drink.’ Considering the state of water bodies in India, the day is not far away when this statement will stand true. According to a recent report by WaterAid on water-scarce regions, based on current rates of access to water and unsustainable water usage, cities and villages in northern and central India, Bangladesh, Myanmar, and Southern Mozambique are facing acute water scarcity.

With growing population, the problem of safe drinking water is also at a rise. The reason behind this ever rising problem is climate change. From excessive rainfall to floods and droughts, from excessive usage of groundwater to reckless use of water bodies, each and everything has contributed to water scarcity. After from this, sewage and garbage from drains have also contributed in polluting rivers and lakes in India, a source of freshwater. Like, Bengaluru, once a city with over 300 lakes now have only 130 surviving lakes that too in horrible state.

Though, government records show that in 1980, just 1 per cent of India’s rural areas had access to safe, usable water which had increased to 30 per cent by 2013. But the fact is that majority of rural India still continues to live without proper access to safe drinking water.

Speaking about what India can do to overcome the problem, Avinash Kumar, Director – Programmes and Policy at WaterAid India, said,

The government needs to approach the issue in a holistic manner by ensuring stringent measures to reduce pollution of water bodies, prevent excessive exploitation of groundwater, promote water recharge measures such as rainwater harvesting, treat wastewater and promote its use for non-critical services and ensure climate resilient water sector planning. Schemes like AMRUT and Har Ghar Jal are steps in the right direction to ensure piped water access to every household but India has a long way to go to ensure that the installed taps do not run dry soon.

According to a WaterAid report, 2016, India is one of the worst countries in the world for the number of people without safe water. An estimated 76 million people in India have no access to a safe water supply, and the situation is only getting more serious. The Asian Development Bank has forecast that by 2030, India will have a water deficit of 50 per cent.