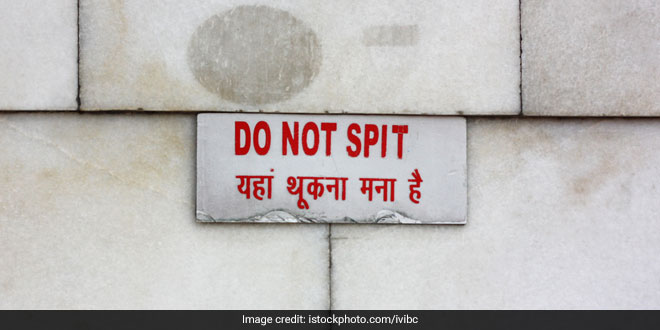 New Delhi: In India, spitting on the streets, walls and littering in public places is so rampant that people often do not realise that it is not just bad civic sense but is also against the law in a lot of states. Uttarakhand, Maharashtra, Delhi, Madhya Pradesh and West Bengal are a few of the states where a law against littering and spitting in public places exists. West Bengal government has decided to spread awareness among the people of the state, as Urban Development Minister and Kolkata Mayor, Firhad Hakim explained that spitting and littering at public places persists mainly due to lack of awareness.

We have seen people, knowingly or unknowingly, polluting public places by spitting here and there and throwing trash. We are spending lakhs to keep the city clean, paint the walls and its bridges. It’s time we raise awareness among common people too, to stop this nuisance, he said.

Citizens now may have to shell out a maximum of Rs. 1 Lakh as the West Bengal Assembly passed a Bill in the Legislative Assembly to enhance the penalty for offenders.

The West Bengal Prevention of Spitting in Public Place Act, introduced in 2003, imposed a fine of Rs. 200 on the defaulters. The penalty has been raised through an amendment to section 338 of the Kolkata Municipal Corporation (second amendment) Act. The amendment proposed to impose a minimum fine of Rs 5,000 and a maximum penalty of Rs 1 lakh fine on litterbugs. The earlier law stipulated that minimum penalty for dumping garbage was Rs 50 and the maximum fine was Rs 5,000.

The Act not only bans spitting in public places, its section 7 also provides for a fine. This law is applicable in the city as well as in the suburbs and other parts of the state. West Bengal is one of the few states in the country to have such an official law, a senior official at the secretariat said.

We have not received any major guidelines regarding the implementation of the law as of now since the bill has just been passed, but what I can say is that the amendment is much needed and awaited, a Solid Waste Management official from Kolkata Municipal Corporation told NDTV.

The move by the state government comes days after Chief Minister Mamata Banerjee expressed her displeasure upon finding out about the pillars of the newly inaugurated Dakshineshwar skywalk in North 24 Paraganas district were stained with paan (beetal leaf) spit marks.

The district administration had imposed a fine of Rs. 1,001 against those found spitting inside the sky walk immediately after the incident.