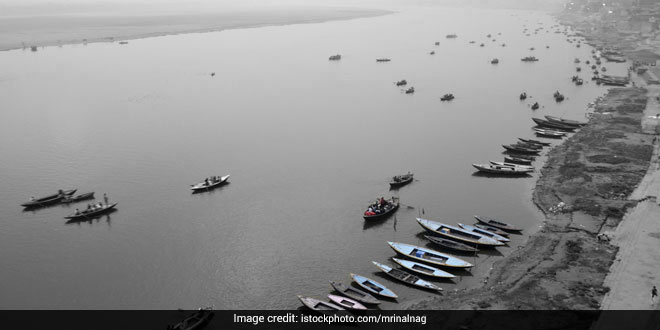 Ever since the National Democratic Alliance (NDA) led government came to power in 2014, the issue of cleaning up the Ganga has been prioritised. The launching of Namami Gange, a multi-faceted programme with a budget of Rs 20,000 crore and timeframe of 5 years is being seen as a comprehensive Ganga clean-up programme which addresses the major issues that have led to the current proportions of pollution in the river. Though it took nearly two years for the programme to wholly begin work on its objectives, since 2016, the Namami Gange programme has made considerable progress. The question that arises is will the programme be able to sustain itself in the long run? While there is no doubt that large scale initiatives are being undertaken to clean the river, the minimal success of earlier programmes like Ganga Action Plan should be looked at to understand why earlier programmes could not find success.

Similar to Namami Gange, the Ganga Action Plan(GAP) Phase I was launched by erstwhile Prime Minister Rajiv Gandhi in June 1986, amidst much fanfare. By the 1980s, pollution in Ganga had reached unmanageable proportions, primarily due to the unchecked flow of industrial and domestic sewage. In 1984, a Central Pollution Control Board report stated that in the industrial town of Kanpur, the water flow of the Ganga had reduced to such an extent, that the river had moved 9 kilometres from its bank. The first phase of the Ganga Action Plan had a budget of Rs 350 crore, which was one of the most expensive programmes undertaken by the government at that time.

The GAP had its objectives divided under core and non-core schemes. The core schemes, where the majority of the allocated money would go, consisted of interception and diversion of industrial and domestic sewage to sewage treatment plants (STPs) and installation of STPs to treat the sewage. The non-core schemes included providing sanitation facilities to people residing near Ganga to stop open defecation on the river banks, installation of crematoriums, development of ghats, afforestation and public participation in cleaning the river. 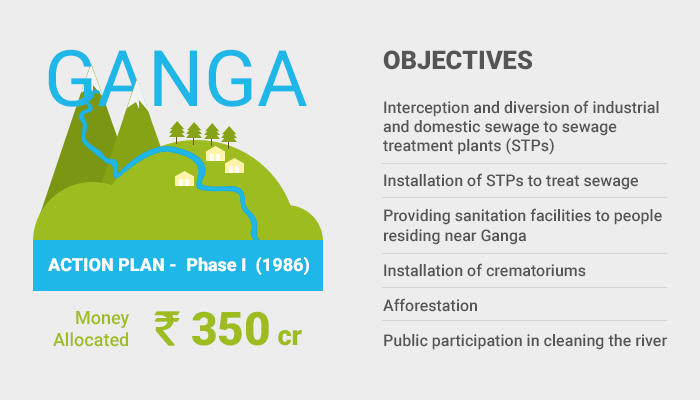 The GAP objectives fit well on paper, but despite the massive allocation of Central funds, the project failed to meet the ambitious goals which were set. Two years after the programme was announced, the CPCB estimated that 28.4 billion cubic metres of sewage (industrial and domestic combined) was being dumped into the Ganga. The cities of Varanasi, Kanpur and Calcutta were the biggest polluters of the river, which continued ttom 8i 90tho dump waste regularly. Till 1988, only 16 of 98 cities situated across the river’s banks had STPs, and these too would malfunction frequently. The status paper on the river action plans by the Ministry of Environment and Forests in 1999 said that only 35 per cent of the sewage generated was tackled, though water quality in the Ganga had improved between the period from 1986 to 1998, coming down to 4 mg/l of biochemical oxygen demand (BOD) from 12 mg/l of BOD. Only 160 out of 425 million litres daily (mld) at Kanpur and about 100 out of 160 mld of sewage at Varanasi has been taken up for interception and diversion under GAP I. 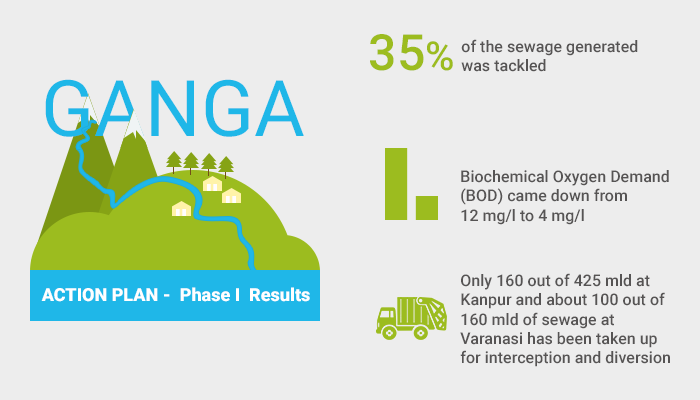 The Ganga Action Plan didn’t consider the seriousness of activities like open defecation, garbage disposal along the banks of the river. It heavily focused on directing industrial sewage towards STPs, but did not take into account the economic factors which heavily dominate the functioning of STPs. Despite crores of rupees being invested, the first phase of the Ganga Action Plan was unsuccessful to say the least,” said Rakesh Jaiswal of Eco Friends, a Kanpur based NGO.

The Ganga Action Plan was extended in 1993 and named as Ganga Action Plan- Phase II. From 1993 to 1996, the plan was extended in several phases, principally to accommodate the rivers Yamuna, Gomti, Damodar and Mahananda. Phase II of GAP planned to address the issue of river pollution across 95 towns and 7 states for a period of 4 years, which was extended till 2000. Compared to the first phase, GAP II’s budget was a high Rs 1,498.66 crore and was to be shared with the respective states on 50:50 basis. GAP II also addressed several issues which were the reason behind GAP I’s minimal success.

A limited number of research projects were undertaken under GAP II to conduct site-by-site research and collect data on area wise pollution of the river, unlike the previous estimations. All India Institute of Hygiene and Public Health (AIIHPH), Kolkata along with National Environmental Engineering Research Institute, Nagpur carried out studies in the towns of Varanasi, Kanpur, Patna and Kolkata to understand why interception and diversion of sewage to STPs problematic in these towns. By 1997, GAP II’s budget had been increased to Rs 2285.48 crore and 441 new projects were planned. The funding pattern was also changed to 70:30, to be borne by the Centre and states respectively.

GAP Phase II is considered slightly more successful by environmentalists and Ganga experts. Better research on creation of STPs, reducing the burden of funding from the Centre and broader involvement of states were the key reasons why the second phase of GAP saw considerably better results than the first. A total capacity of 1757.23 mld of sewage treatment was created under the second phase, against a sanctioned 2402.66 mld. Though the shortfall was nearly 700 mld, it was still considered a major improvement compared to phase one where only 868.69 mld capacity of sewage treatment was created. However, Phase II failed to completely clean the Ganga by 2000, though initially it was estimated that by 2000, the river would be cleaned. 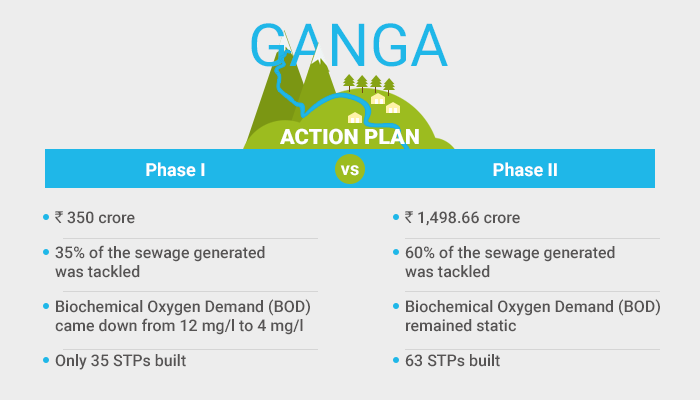 Why Namami Gange Could Be Successful

The minimal success of the previous Ganga cleaning programmes should not deter the present programme, as planning wise, Namami Gange is considerably ahead of either of the earlier plans. A major advantage enjoyed by the Namami Gange programme is the fact that it’s headed by the National Mission For Clean Ganga (NMCG), an institutional body which has been given due financial and administrative powers as per the River Ganga (Rejuvenation, Protection and Management) Authorities Order, 2016. A singular institutional structure makes it easier for decision making. Namami Gange has also brought the states onboard, something the previous programmes were unable to. All the states, barring West Bengal, have formed state level committees exclusively to look at the issue of Ganga’s clean-up. These state level committees are responsible to look after the implementation of projects under Namami Gange, as well as the proper utilisation of funds under the project. The proposed Namami Gange has also equally stressed on eradicating the practice of open defecation across the banks of Ganga and has been largely successful in that aspect, unlike previous plans. More than 90 per cent villages across river Ganga have been declared open defecation free, and by October 2017, the rest of the villages would become ODF as well. The programme has also successfully renovated over 180 ghats and built 112 new crematoriums. These were some of the non-core schemes under the first phase of Ganga Action Plan but by giving them equal importance, Namami Gange has ensured that pollution from domestic sources are adequately checked.

Namami Gange has also taken up the matter of STPs far rigorously than earlier programmes. Ever since the programme was launched 155 new sewage treatment projects have been approved and 963 more will be approved soon. Not only will these treat sewage but also assist in composting. Moreover, the centre will not only bear the cost of constructing the STPs, but provide financial assistance for functioning and management of the plants for 15 years from the beginning of operation. 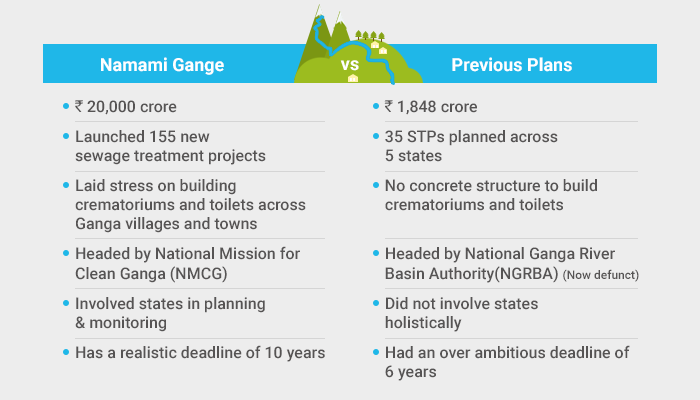 Namami Gange is not without its share of problems, the chief being land allocation for such a large number of projects. But with a huge budget, singular monitoring body and a realistic deadline of 10 years, the programme has ample time to figure out the multiple problems plaguing the Ganga and come up with pertinent solutions.

Over the past two years, the problem of Ganga has been taken seriously at the highest level. We have moved away from just allocating crores which translate into nothing. Apart from allocation, the Namami Gange programme has also laid equal stress on planning, monitoring, bringing together the states and announcing state-wise projects. The upcoming legislation will also be of great help as much of the pollution from industries will be stopped, and make the progress of cleaning speedier, said Advocate Arun Kumar Gupta, one of the members of the drafting committee for the National River Ganga (Rejuvenation, Protection and Management) Bill 2017.

Can This Smart Bin Made By The 13-year-old School Children Solve India’s Growing Garbage Issues?