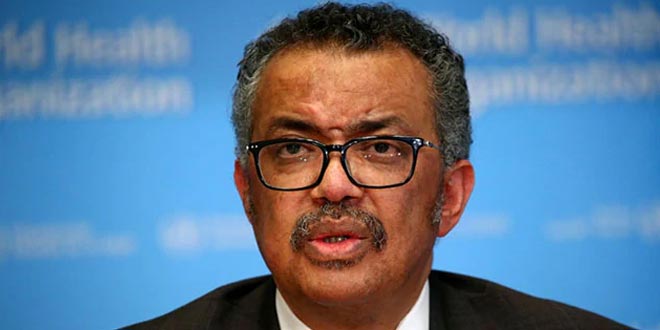 United Nations/Geneva: The WHO on Wednesday (August 4) called for a “moratorium” on booster shots of the COVID-19 vaccine until at least the end of September, noting with concern the disparity in vaccination levels in low and high-income countries. World Health Organisation Director-General Tedros Adhanom Ghebreyesus said at a news conference in Geneva that while high-income countries have now administered almost 100 doses for every 100 people, low-income countries have only been able to administer 1.5 doses for every 100 people, due to lack of supply.

“Accordingly, WHO is calling for a moratorium on boosters until at least the end of September, to enable at least 10 per cent of the population of every country to be vaccinated,” the WHO chief said.

WHO urged ‘everyone with influence’ — Olympic athletes, investors, business leaders, faith leaders, and every individual in their own family and community — to support its call for a moratorium on booster shots until at least the end of September.

So far, more than four billion COVID-19 vaccine doses have been administered globally and over 80 per cent have gone to high- and upper-middle income countries, even though they account for less than half of the world population.

And yet even while hundreds of millions of people are still waiting for their first dose, some rich countries are moving towards booster doses, Mr Ghebreyesus said.

Emphasising that while he understands the concern of all governments to protect their people from the Delta variant, the WHO chief said,

We cannot accept countries that have already used most of the global supply of vaccines using even more of it, the world’s most vulnerable people remain unprotected.

Mr Ghebreyesus had in late May called for global support for a ‘sprint to September’, to enable every country to vaccinate at least 10 per cent of its population by the end of September.

We’re now more than halfway to that target date, but we’re not on track.

Calling on vaccine producers to prioritise the vaccine distribution alliance COVAX, Ghebreyesus underscored that vaccines are not the only tool to defeat the pandemic.

Indeed, there is no single tool that will defeat this pandemic. We can only defeat it with a comprehensive approach of vaccines in combination with the proven public health and social measures that we know work, he said.