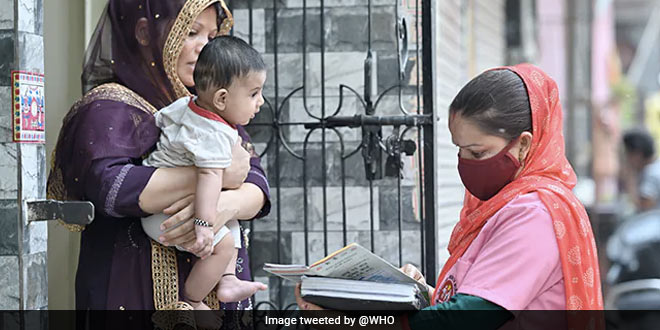 Geneva: India’s one million all-women ASHA (Accredited Social Health Activist Workers) workers were awarded and honoured by WHO for their ‘outstanding’ contribution to advancing global health, demonstrated leadership and commitment to regional health issues. ASHA (which means hope in Hindi) are the more than 1 million female volunteers in India. They were honoured for their crucial role in linking the community with the health system and ensuring those living in rural poverty can access primary health care services, throughout the COVID-19 pandemic.

Also Read: No Work From Home For India’s Grassroot Health Workers – Anganwadi Workers, ASHAs And ANMs – Even During COVID-19

ASHAs worked to provide maternal care and immunization for children against vaccine-preventable diseases; community health care; treatment for hypertension and tuberculosis; and core areas of health promotion for nutrition, sanitation, and healthy living, said WHO in its official statement.

ASHAs are true champions of health who help bring primary health care to the doorstep of people. Their work has always been exemplary, especially during the pandemic. I congratulate this one million-plus all-women workforce for this truly deserving recognition.

The ceremony for the awards, which were established in 2019, was part of the live-streamed high-level opening session of the 75th World Health Assembly.

At a time when the world is facing an unprecedented convergence of inequity, conflict, food insecurity, the climate crisis and a pandemic, this award recognizes those who have made an outstanding contribution to protecting and promoting health around the world,” said WHO Director-General Dr Tedros Adhanom Ghebreyesus. “These awardees embody lifelong dedication, relentless advocacy, a commitment to equity, and selfless service of humanity, he added.