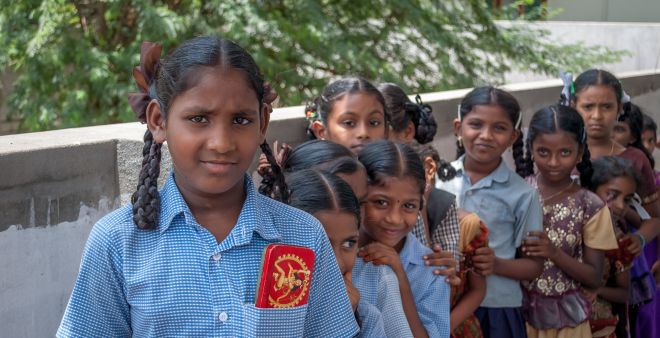 New Delhi: ‘Dear Parents, In school I have been told not to defecate in the open and instead have a toilet at home. But, at home we don’t have a toilet. We have been used to open defecation. Now, I want to change this practice, it is very important that we have an individual toilet at home. The government is providing necessary funds for construction of toilets. I urge you to construct a toilet at home before the Makar Sankranti festival. Otherwise, I will not come home for festivities and will be happily staying in the school,’ said a girl studying in Kasturba Gandhi Girls Residential School at Pamuru village in Andhra Pradesh in a letter to her parents.

She was not alone, nearly 100 more girls from the Kasturba Gandhi School sent the same letters to their parents in their respective villages asking them to build a toilet otherwise they would not come home for the Makar Sankranti festival which is an important festival for the people of Andhra Pradesh and it is customary for all the family members to gather and celebrate it in a big way. The harvest festival will be celebrated on January 14, it marks the beginning of an auspicious phase or the holy phase of transition.

The students had come up with this campaign idea in order to educate their parents about the importance of having an individual toilet at home and end the age-old tradition of open defecation.

Last week, Andhra Pradesh Chief Minister N Chandrababu Naidu set March 31 as a deadline for construction of toilets in every home in the state. He also warned of dharna and hunger strike if the state fails to achieve the target.

“I will sit on a silent dharna. I will also observe a day-long fast. At least then you (people) will show some pity (on me) and build toilets,” Chief Minister N Chandrababu Naidu said while terming toilet a fundamental birthright.

Till date, out of the 13 districts in the state, six have already achieved 100 per cent toilet construction and remaining seven are yet to achieve the target.