New Delhi: Women have been at the receiving end of lack of toilets, for decades. From dropping out of school when they hit puberty to health problems that develop over time due to restrictions on when women can go out and relieve themselves in the open, the impact of lack of hygiene and sanitation on women goes far beyond just lack of toilets. So it was only a matter of time when women would come forward and do something about lack of basics, like access to toilets. Swachh Bharat Abhiyan has only helped matters. From helping their district build thousands of toilets in a couple of weeks to leading cleanliness drives to practising the 3Rs – reduce, reuse and recycle, women in India are getting involved with every aspect of Clean India Movement. This International Women’s Day, we look at 5 inspiring women swachh warriors:

When it comes to ranking the states on the basis of their performance in Swachh Bharat Abhiyan, Jharkhand comes up as an average performer. Since the launch of the Swachh Bharat Abhiyan in 2014, district administrations in Jharkhand have failed to at implementing toilet building programmes on a scale or speed that the state would like. Understanding the importance of the campaign gravity of Swachh Bharat Abhiyan and in terms of toilet construction, recently 1.5 million women in Jharkhand took the lead and ran a hygiene campaign for a month. About 1 lakh Sakhi Mandals, 14 lakh women, 2 thousand women Panchayat representatives, 29 thousand water carriers, 10 thousand female cleaners and 50 thousand women mason were involved in this campaign. Together they set a record of constructing 1 lakh 70 thousand toilets in just 20 days.

Despite this mammoth effort Jharkhand still has a long way to go to achieve its target of open defecation free state by October 2018. As of now, only three districts, 56 blocks, 11,387 villages and 1,378 gram panchayat have been declared free from the practice of open defecation.

2. 10,000 Toilets In Just Two Weeks, This Karnataka District Made It Possible, Thanks To CEO Of Zila Panchayat Hepshiba Rani Korlapati 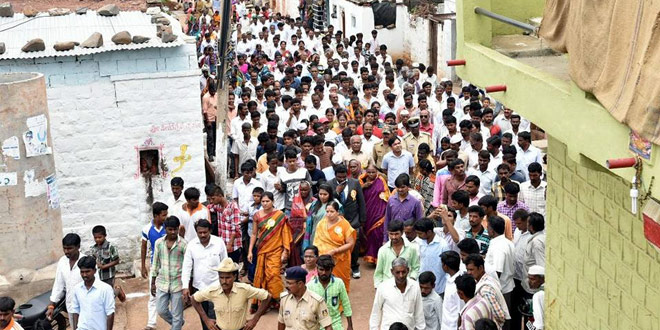 With a population of 18 lakh in its rural areas, Kalaburagi is one of the most populous districts of Karnataka. Its biggest challenge was a mere 20 per cent sanitation coverage. But district administration headed by Hepshiba Rani Korlapati, CEO of Zila Panchayat, took on the challenge of eradicating the problem of open defecation and building 10,000 toilets in two weeks. The massive toilet building program kick-started on the occasion of World Environment Day on June 5, last year.

For the administration, the challenge was not to just build toilets but to make villagers get over superstitions like digging the earth when there is a pregnant woman in the house is a bad omen. Overcoming various such superstitions and fighting age-old habits of open defecation, the administration managed to convince 130 households with pregnant women to participate in the project.

From digging pits to setting up structures for toilets to carrying construction materials and finally building a toilet, the CEO supervised each and every aspect of this massive exercise. With all this, the district succeeded in building 10,560 toilets by June 19, 2017.

3. What It Takes To Be India’s Cleanest City

The largest city of Madhya Pradesh, Indore, is currently headed by Mayor Malini Gaur and she is shouldering the responsibility of ensuring that Indore retains the cleanest city of India title this year too in Swachh Sarvekshan like last year. For this Ms Gaur is leading various initiatives of the Indore Municipal Corporation (IMC). After pushing for waste segregation at the source for last two years, the corporation has now started gifting two dustbins to the newlyweds who get married in community weddings organised by the civic body under the Mukhyamantri Kanyadan Yojna. In addition to the unique wedding presents, the couples tying the knot take eight pheras as opposed to traditionally seven pheras, signifying the seven wedding vows. The extra vow is the commitment of the couple to the clean Indore.

Also Read: Tying The Knot In Indore? Here Is The Civic Body’s Gift For A Swachh Marital Life

In additions to segregation of waste, to encourage citizens to keep their city clean and discourage the habit of throwing garbage from the car, IMC has launched small portable bins for cars costing Rs. 35.

Earlier in January, to hold people accountable, the local administration also started the name and shame campaign. So, if an individual is caught spitting then his/her name will either be aired on radio or mentioned in the local newspaper. For the same, the IMC has appointed a special team who will visit and inspect highly prone areas. They will first ask the names of the violators and send it to the local newspaper or radio station. A fine of Rs. 200 or more will be levied on habitual offenders.

In addition to this, Ms Gaur keeps a close watch on city’s cleanliness and visits different areas of the city to take a feedback directly from the citizens and understand their problem.

Nidhi Choudhari, who was appointed as a CEO of a tribal district back in April 2016, had a list of challenges and problems prevailing in the district to tackle. From the low level of sanitation to the continuous rise in instances of malnutrition, to having a stiff target to build 1,04,000 toilets for the district to go ODF. Making toilet construction as her mission, Ms Choudhari collaborated with UNICEF and the government’s Swachh Bharat Abhiyan to build toilets in the district. From going door to door to make people aware about the pivotal role a toilet plays in an individual’s life to asking people to stand up for themselves and construct a toilet, Ms Choudhari did it all.

Today, she has not only built more than the number of toilets required, but her district has been declared free from the practice of open defecation.

Palaghar district hit the headlines for another women swachh warrior, Sushila Khurkute, who when she was seven months pregnant dug the rocky ground outside her house for three consecutive days to build a toilet. For her swachh efforts and determination to have a toilet at her place, Sushila was honoured by Prime Minister Narendra Modi last year on International Women’s Day. She was also declared the face of Maharashtra’s Open Defecation Free Project.

A hotelier by profession and a crusader by passion, 44-year-old Kalpana Thakur is recycling and reusing hotel disposable waste. Ms Thakur owns a picturesque tourist resort ‘The Byke Neelkanth’ in Prini village, Himachal Pradesh, where she makes use of cooking oil instead of kerosene oil to ignite lamps. While discarded paper napkins, egg trays, and packaging material are used for making ornaments, fruit baskets and plastic bottles are used for making the bird feeder, flower pots, and pen stands. The green warrior believes that this art of recycling is a boost to Swachh Bharat Abhiyan cause and critical for the environment.

Ms Thakur has been into recycling for a long time. In her initial years in Manali, she was known as the waste warrior as she used to collect and dump plastic waste, tetra packs and tins dumped recklessly in the markets.

She then starting working with the trash collected to create artworks, which would then be exhibited in various shows. The money raised from the sale of any of these exhibits would then be given to charity.

In her hotel, more than half of the decoration pieces are made from reusable waste items. She also holds sessions on reusing and recycling free of cost, for her guests. She wishes to inculcate a culture of reusing the household waste to prevent it from simply getting dumped in the landfills, for the sake of the planet.

Swachh Survekshan 2021: A Look At How Cities Will Be Assessed This Year

Swachh Survekshan 2021 has gotten underway, a look at how SOME OF the cities and urban local bodies will be assessed this year and how they are preparing to win the title of India’s Cleanest City