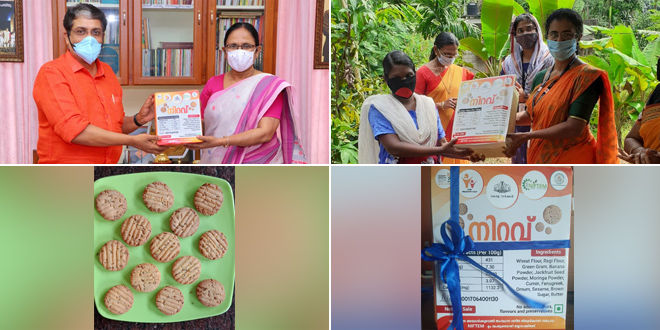 New Delhi: In a bid to provide nutritional support to malnourished lactating mothers, the Department of Women and Child Development, Government of Kerala has launched lactation cookies during the World Breastfeeding Week which is celebrated every year from August 1 to August 7 to raise awareness about the importance of exclusive breastfeeding during the first six months and supplementary breastfeeding after that. Made with ingredients which are rich in nutrition and help in enhancing the production of breastmilk, the cookies are called ‘Niravu’ which means ‘fulfilment’. According to Bindu Gopinath, Assistant Director, Women and Child Development, Kerala, the government will be distributing these cookies to the new mothers under a pilot project for one month in Thiruvananthapuram after which the initiative will be extended to the rest of the districts in the state.

Emphasising on the fact that breastmilk is an elixir for newborns containing crucial vitamins and minerals the baby needs, Ms. Gopinath further said that it is important to make sure that a woman who is breastfeeding her baby consumes sufficient hydration, calories and nutritious foods because lactation demands a lot from a woman’s body. It is a lot of work and so a woman needs to take care of her body, she said. Ms. Gopinath added,

Women, especially those in rural areas or belonging to poor economic background are unable to have adequate amount of nutrition per day. The take-home ration that is provided to women through Anganwadis under ICDS (Integrated Child Development Sevices) is mostly shared by the whole family and not exclusively by the pregnant/lactating mother. Therefore, we have designed lactation cookies as a form of supplementary nutrition for these women. Malnourished women produce less milk and so lactation enhancing mixes must be taken to boost milk supply.

She further said that in order to make these cookies less appealing to the children or other family members in the house, the taste of the cookies has been kept bland.

These lactation cookies are being prepared for distribution on a pilot basis at the rate of 100 gm (4 pieces) per day per mother for one month free of cost.

According to Ms. Sooraj, the state government has identified 1,615 malnourished lactating women who live in tribal areas and coastal areas of Thiruvananthapuram for conducting a pilot study of the product. These women will be provided with a supplementary nutrition kit containing 120 cookies each. They are required to eat four cookies per day. These women will be examined frequently for one month and constant feedbacks will be taken from them about taste, texture, change in nutrition intake and others. After testing the efficacy of the product during the pilot, changes in the ingredients, taste and weight of cookies will be made as per the requirement and then the process of identifying the needy women and distribution in other districts will begin.

As part of the initiative, the government of Kerala will be providing 120 cookies to beneficiary lactating mother per month for six months to encourage them to practise exclusive breastfeeding in the first six months of childbirth.

The fourth National Family Health Survey (NFHS IV), conducted in 2015-16 shows that in Kerala, exclusive breastfeeding for newborns is at 53.3 per cent which has decreased by almost 3 per cent from the NFHS III (2005-06) figure of 56.2 per cent. However, if compared with the national average of 46.6 per cent, the state of Kerala is performing better in terms of exclusive breastfeeding of babies upto six months.

Also Read:  World Breastfeeding Week: Some Women Cannot Breastfeed Their Infants And It Is Okay, Explains This New Mom

Assam Government Announces Weekend Lockdown Until August 14, Here’s What Is Allowed and What’s Not