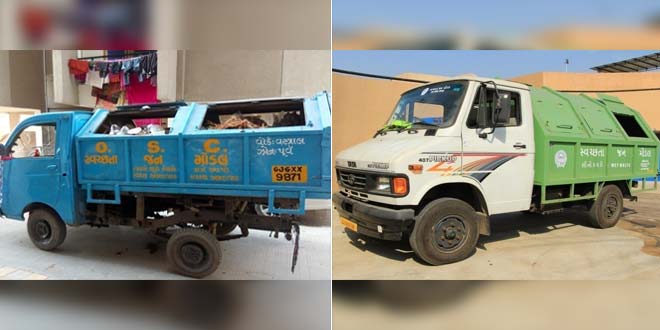 The concept of waste segregation at source may be new for most Indians, but not for the residents of Gujarat’s largest city, Ahmedabad. A year back, the Amdavad Municipal Corporation (AMC) initiated the ‘Swachhta Jan Model’ to implement waste segregation at source. Under the initiative the AMC distributed nearly 75,000 dustbins across the city for keeping dry and wet waste separately. Over a period of one year, the civic officials conducted swachhta rounds where they went from door-to-door and taught people to segregate waste.

“We conducted nearly 30 swachhta rounds in 6 municipal wards in the last one year, and today nearly 50,000 households have made waste segregation a part of their daily lives,” Bhavin Solanki, Medical Officer of Health, AMC tells NDTV.

The city generates nearly 4,000 tonnes of wastes on a daily basis of which half of it is treated through recycling, composting, etc. With the current waste management model, the AMC plans to achieve 100 per cent waste treatment by next year, confirmed Harshadray Solanki, Director of Solid Waste Management, AMC. “Waste segregation at source is a major key to achieve this ambitious feat. Hence, we plan to scale up household waste segregation,” says Mr Harshadray.

With Prime Minister Narendra Modi’s announcement during Mann Ki Baat to kickstart nationwide waste segregation campaign in 4,000 cities across India starting June 5 till October 2, the AMC has made an agenda for the next 3-4 months, from World Environment Day onwards, to reduce city’s overall waste generation.

Here are some of AMC’s plans to give a mega push to waste segregation:

On the World Environment Day, the AMC will distribute nearly 50,000 green and blue coloured dustbins across the city. With 12 lakh households in the sprawling city, the AMC plans to cover them all in the next few months. The civic body will also launch two E-Rickshaws on the same day which will have internal compartments for dry and wet garbage. “These rickshaws will be deployed to collect roadside litter in the city,” adds Mr Bhavin.

The AMC in collaboration with the Confederation of Indian Industry (CII) will inaugurate a competition in schools, colleges, companies and hotels under ‘My Waste, My Responsibility’ to create awareness among the citizens of Ahmedabad. The competition will go on for 3 months and participants will be monitored on four parameters – waste segregation, littering, location of dustbins and on-site treatment of garbage.

To ease the activity of waste segregation for civic workers, the AMC will deploy 1,000 waste collecting vehicles in July. The AMC will send two separate trucks – one which collects dry waste and other which collects wet waste. Each truck will have a capacity to carry 1-3 tonnes of garbage per round, says Mr Bhavin.

The AMC will soon pass a rule under which from July onwards it will stop collecting wastes from houses and societies if the waste is not segregated into dry and wet waste. “According to the Solid Waste Management rules 2016, the onus of segregating waste is on the producer. To ensure that the rule is followed, this new rule will be introduced,” adds Mr Harshadray.