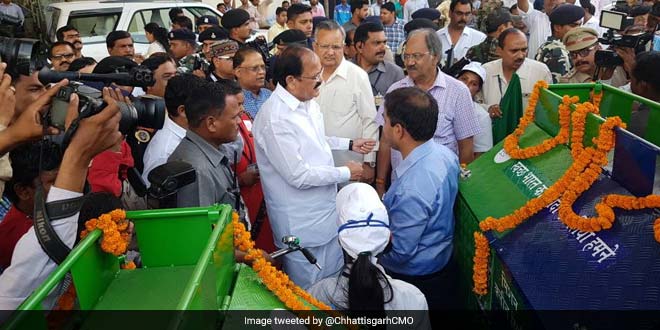 Raipur is one of the 4000 cities gearing up for the kick-start of the massive waste segregation campaign across India on World Environment Day on June 5. The city has decided to utilise the day to train Self Help Groups (SHGs) and the officials of various Wards in waste segregation. The training for SHGs will happen on June 3 and 4 where about 50 women will be invited from these groups and they will be given training on how to segregate waste. The city recently flagged off the E-rickshaws for door to door waste collection, that will be operated by women.

We already do door to door collection but when these women start operating the E-rickshaws, they should know which bin is for which waste and thus we are planning to train them about the whole process of collecting waste, segregating them , which would be recyclable and which non-recyclable, said Mr Harvendra Sahu, Executive Engineer of  Raipur Municipal Corporation and in-charge officer of Swachh Bharat Mission.

Raipur is ranked 129 among 434 cities ranked as per their cleanliness quotient in Swachh Sarvekshan 2017. The city is working towards a higher ranking next year and being part of the massive 4000 city waste segregation campaign on World Environment Day on June 5, is a step in the right direction.

Prime Minister Narendra Modi on May 28, during the 32nd address of his monthly radio address ‘Mann Ki Baat’, Further discussing about the issue of cleanliness, he asked not treat garbage as waste, it is wealth and a resource.

He said, On June 5, on the occasion of World Environment Day, the government, in association with the state governments, will launch a massive movement of waste collection in 4,000 cities across the country.