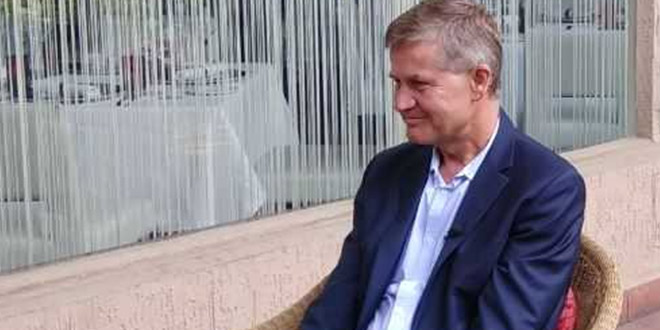 New Delhi: A wide range of programmes, host of activities and massive citizen participation are marking the 45th World Environment Day celebrations in India, the host country. Since the announcement of India as the global host for World Environment Day 2018, UN Environment Head Erik Solheim has been a busy man, visiting India and participating in various activities in the run up to World Environment Day. From flagging off a fleet of e-vehicles in Mumbai, to committing to green cricket in India, Mr Solheim has been at the forefront of some of the major steps and policies being taken to combat environmental pollution in India. Speaking to NDTV, the UN Environment Head said how India is taking giant leaps towards ensuring a cleaner and healthier environment.

Question: Ever since India was chosen as the host for the 45th World Environment Day celebrations, there has been enthusiastic participation from people. Did you expect such a response from India?

Erik Solheim: I have to admit that the response absolutely exceeded our expectations. I expected India to do well but the response has been overwhelming. It has been very moving to see citizens come out and celebrate World Environment Day. We saw over 1,000 students at a school in Kerala making a pledge to not use plastic. There was another instance of a girl walking 1,300 kilometres from Gujarat to Mumbai to pledge for a better environment. The participation of organisations, such as BCCI’s commitment to green cricket, has been exceptional. The engagement of citizens has been amazing and both the Central government and state governments are really pushing the agenda of a cleaner environment.

Question: Do you think the environmental consciousness in India has grown among people in the last few years?

Erik Solheim: I think there has been a sea of change in the last few years, and one must give a lot of credit to Prime Minister Narendra Modi. From the debate between does one want development or prefer taking care of the environment, Mr Modi has spoken about development and protecting the nature at the same time. The Prime Minister has spoken extensively about solar energy, cleaning the Ganga, creating jobs in the green economy and transforming agriculture into a greener and cleaner sector.

Question: Plastic in India is a part of its economy, as lot of small shopkeepers and traders are dependent on plastic bags and bottles. How do you think the transition from plastic to alternatives could be smoother, without a severe impact on the economy?

Erik Solheim: Many countries have eradicated plastic successfully and ensured a turnaround. Kenya prohibited plastic bags last year, but there were a lot of questions and even the President was skeptical whether such a move would be economically viable or not. But they successfully executed the ban on plastic bags and a number of alternatives came into the market. Of course, if a recycling based economy is created, more new jobs are created. Even if plastic is used, it should be recycled multiple times and not just once. Systems like returning used plastic bags in exchange of a rupee should be promoted. This way, there is no loss for the small vendor, no loss for the consumer and no loss for the environment.

Question: What responsibility do you think the Indian citizen holds in terms of ensuring a plastic free India?

Erik Solheim: We strongly request Indians to change their habits of using plastic. Certain habits like using straws can be changed easily, as they are plastic products on which we need not be dependent. We also do not need plastic bags when there are so many other alternatives available. We can use cutlery made of other products, instead of plastic. If people start using alternatives, it sends a strong signal to political leaders. We also urge people to encourage recycling of plastic instead of discarding it, so that plastic waste generation is kept in check.

Erik Solheim: This is absolutely a huge issue and the problem of marine pollution has reached severe proportions. A few days back, a whale was found in Thailand with a huge quantity of plastics inside its stomach. Fishes, sea birds are becoming victims of marine pollution. To stop this, the flow of plastics into oceans should be checked. We need to clean up our beaches. Beach cleanups are taking place all over the world and a lot of volunteers are engaged regularly in beach cleanups.

Beach cleanups will not incur a huge cost for the state governments as many volunteers are always willing to participate in such activities. Beach cleanups are also economically viable as cleaner beaches attract more tourists, who contribute to the economic development of the region. This is an economic issue, not just an environmental issue. In Indonesia, people have mobilised in large numbers to clean up beaches and we can see similar initiatives in India.

Question: Pollution has been a huge problem for India and it has been an economic and health deterrent for the country. Where do you see India standing in terms of environmental pollution, in the next five to ten years?

Erik Solheim: There is a big shift happening in India in terms of dealing with environmental issues. A few years back, key Indian politicians didn’t believe about the existence of environmental problems.  Now initiatives are being taken by the citizens themselves, who want cleaner cities and politicians are responding to that demand. Actions such as green metro systems in Kochi and Hyderabad, electrical cars which were recently flagged off in Mumbai and Hyderabad and turning agricultural waste into fertiliser and use it for crops, instead of burning and contributing to air pollution.

With Messages For A Greener And Cleaner Environment, Actors And Sports Personalities Celebrate World Environment Day 2018