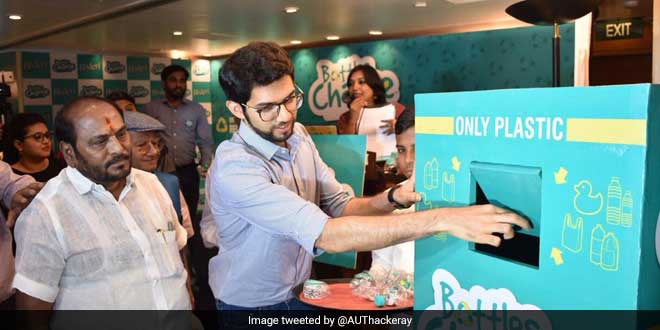 New Delhi: India’s efforts to beat plastic pollution were complemented in the country being chosen as global hosts for the 45th World Environment Day. Amidst nationwide events and celebrations where numerous celebrities and leaders pledged themselves to work towards a cleaner and greener environment, a major movement was launched in Mumbai by Shiv Sena politician Aaditya Thackeray and Bisleri to collect PET bottles from citizens and establishments to recycle or upcycle them. Plastic bottles a major pollutant and many people use them and dispose them in ecologically sensitive areas such as beaches. The recycling initiative will ensure that instead of ending up as garbage, the plastic bottles can be utilised again.

At the launch of the programme, Mr Thackeray urged schools, colleges, housing societies  and other establishments which see regular generation of empty PET bottles, to hand over the bottles to Bisleri for effective recycling. The event saw participation from a number of people, and Mr Thackeray was joined by ministers Ramdas Kadam and Subhash Desai. South Mumbai Member of Parliament Arvind Sawant was also present at the event. Earlier in the day, Mr Thackeray participated in a beach cleaning programme at Dadar, organised by the NGO Beach Please.

Launched a major movement undertaken by Bisleri to collect all the PET bottles from citizens & establishments to recycle or upcycle them and have effective disposal of waste. Register yourself on https://t.co/1voUUkcXrO and be a part of the movement to #BeatPlasticPollution pic.twitter.com/8WFW37oO9W